Mostly I do not go back to races. Sure there are exclusions, I ran Athens Marathon twice, 2020 will be my third running of Green Man Ultra, but mostly I run races just the once, and then look for something new. After all, there are so many to choose from. One of the further exceptions to this rule, though, is Bacchus.

The Bacchus Marathon, half, and now 10K is a boozy jaunt around the Denbies Wine Estate in Dorking, Surrey. There are 5 wine stops per lap. In prior years there has been an alcohol-free checkpoint, but then, I hear you ask, what is the point? This year they did away with that one. Although in the heat a dandelion and burdock and a handful of pick and mix would have gone down well. And, if truth be told, I hadn’t planned to run this at all. The crowd from previous years had spread to the four winds, especially with GNR and Medoc the same day, but then with running buddy Jenni returning from her world tour, this meant I had a London runner to plan races with once more and so signed up, knowing the likes of Ben, and Emma would be there too in one guise or another.

The race is a late starter. The marathon kicks off at 9.30, with the half in batches every quarter of an hour after that until 11 when the 10K runners head out into the fields. And this means you can head down to Dorking on the day and still make the registration and bag drop in time, especially after the bib collection clusterfuck of previous years has been rectified, or you can have a lie in after a night on the beer and limoncello, staying in one of many local hotels. My recommendation? The White Horse Tavern on the High Street. Meal at Viva. Or, if so inclined, the Wimpy opposite. 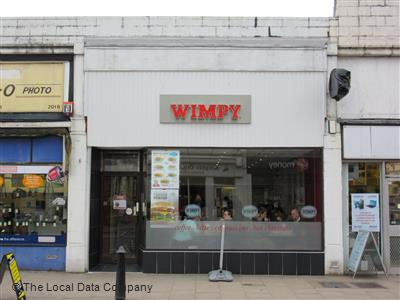 I recommend staying in a hotel, a big old meal, and booking a cab the next morning, although there is ample parking for designated drivers (and who would want to be one of those?),  and Denbies is only a 15 minute walk from the station, and 20 from town.

In previous years the packet pickup was a mess, as I said. It was in the main building, with huge queues that, when you reached the front, was actually sorted by surname. You couldn’t tell from the back of the queue though and people would not be happy. Now they have a registration tent, sorted by number, with your number emailed to you the weekend before. It was fast and seamless. Tick. Bagdrop was equally as fast and within minutes of arriving we were all set up and ready to go.

And before we even started there was a comedy moment from the off as a group of four older ladies (Superman, Batman, Wonderwoman, Captain Marvel) asked me how I could run with that huge thing wobbling about in front of me. 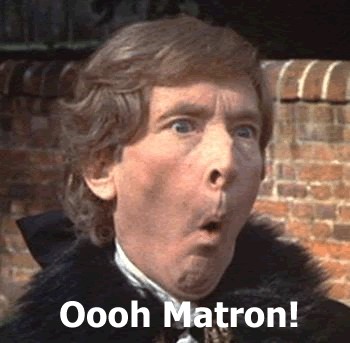 Which brings me to the costume choices of the day. After successive years of the #ukrunchat unicorns, with only a few of us there, no Sarah, Jason, Carl, Mike, Mike’s Mum, Whiffers, Ciara etc, the theme became more personal.

And so we went with Toy Story 4, a decision we made last time we ran it. Plenty of options to choose from. It was at the 2017 running of Bacchus, drinking at the pub that it was suggested I go as Spanish Buzz (from when Buzz Lightyear resets), and I was tempted, believe you me. And so this year there was a Buzz, another Woody, and Jen put in a lot of effort to go as Bo Peep, complete with Giggle McDimples sewn to her cape and spray painted crook. Me? I had to go as Woody. The costume was therefore official Disney Woody Tee, hat, slip-on felt cowboy boot covers and the piece de résistance, Bullseye. 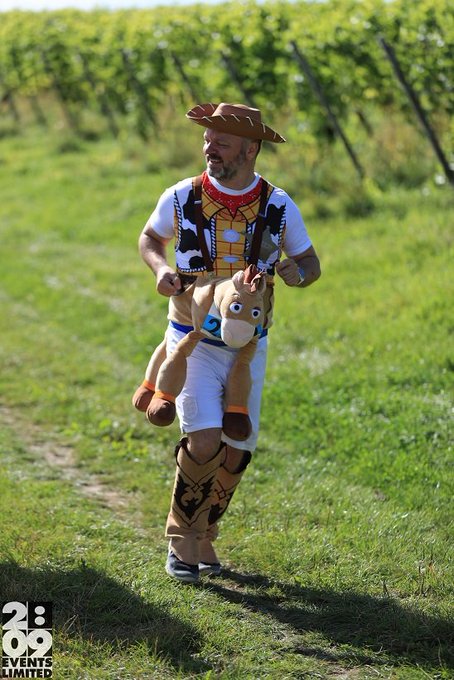 And no, he is not a donkey. So many idiots asked about the donkey. He is a Fricking horse.  And he, Bullseye, was so popular with all the kids cheering on the course. I got shouts of giddy up, Bullseye. A little boy came to pet him at the end. And really it made the day. The kids loved the outfits. Although no one got to see the ANDY written on my shoe as the finishing touch. 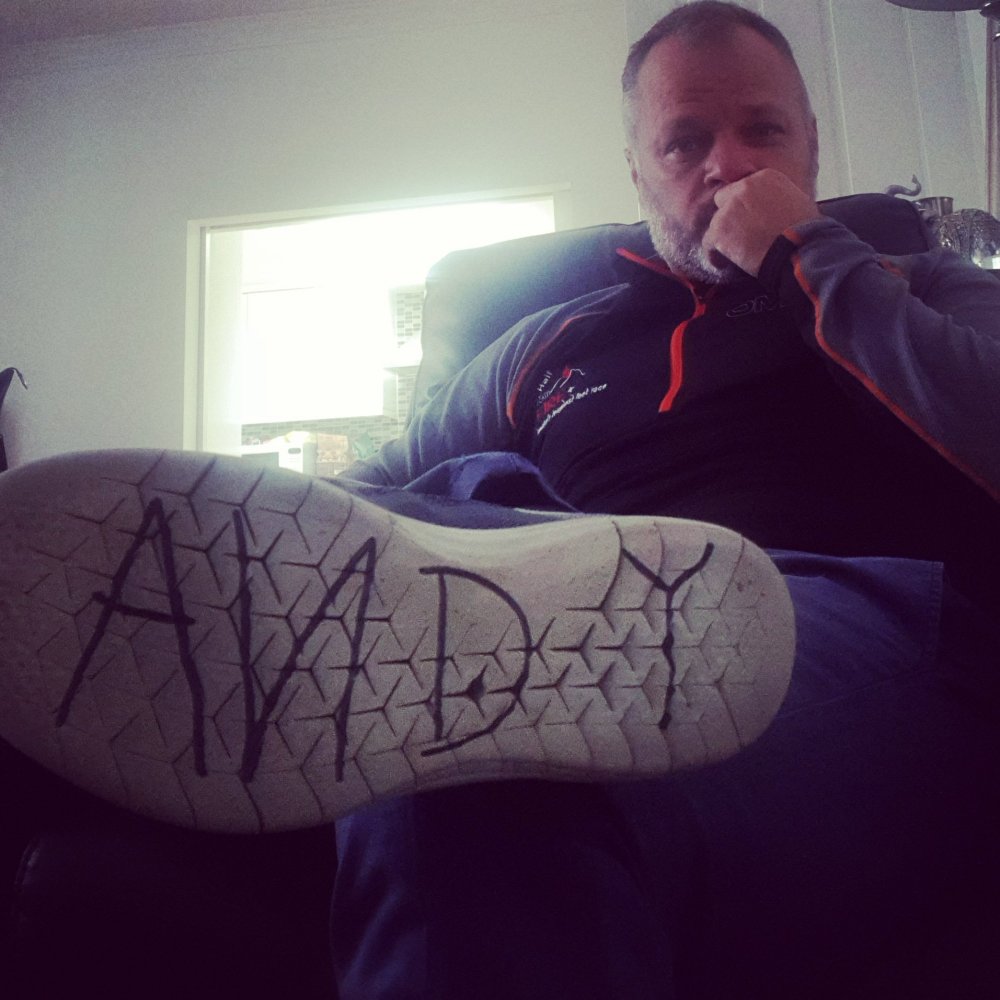 They changed the route markedly. This was due to a tree being down apparently, and it meant that we spent more time in the winery itself, that, in turn, meant the route was a lot hillier. I, for one, didn’t like it. There were more zigzags through the vines, a lot more hills, and it threw the spacing of the wine stops off. The first was too far into the race, and you pass by it within touching distance before being led off by tape, to complete another kilometre before we could actually partake in some wine. The second was in the wrong place too, or was it the third? The wine stop was in a narrow path, with a grumpy marshal bellowing at people to keep moving. That was not in the spirit of the event at all. 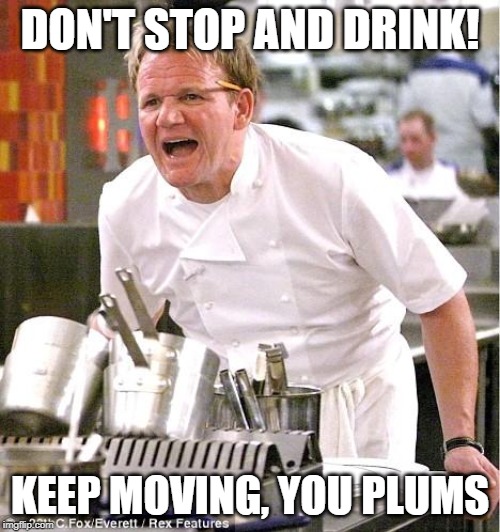 There were more bands, one at each stop if you include the bag pipe player. One was particularly good, the one with the female lead and country feel. The old, rough as houses, rock n roll band at the last stop (the bubbles stop) made the event. We spent half an hour there, drinking 6 glasses of wine, as people nabbed bottles, danced and sang. Although the earlier bands you could hear as you ran through the winery, the vocals echoing out with no music. So it sounded like a drunk bellowing out of tune as he stumbles past your house on the way home after a lock in. 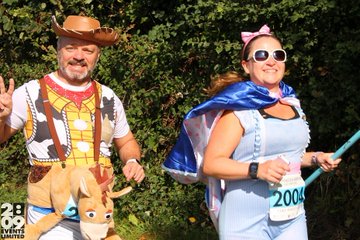 I guess this illustrates that the race you run one year and love, blogging it, selling it to others, may well be rubbish the next. This year I felt that for much of the race. The route was far worse than my previous two runnings. The placing of one wine table was completely wrong. There was virtually no food to soak up the booze. The marshals didn’t know how far there was to go before the next. There was too long between stops for the first half of the race, and they were too close together for the second half.

There were more runners too, and a lot fewer people dressing up. 209 Events had lowered the finish time considerably, so only decent marathon runners would attempt the very hilly, trail route. The half runners seemed fewer and, as I said, costumes were not as abundant as before. Sure, where was a bunch of grapes, a hen do, a league of superheroes, and a whole world of Where’s Wally? But it didn’t feel as epic as 2016 and 2017 when the photos would have dozens of themed costumes on show. We did make a real effort. Although people did ask where Bo Peep lost her sheep, and I did, during the planning stages suggest taping 3 sex shop sheep together to make Billy, Goat and Gruff.

After a sprint finish we all enjoyed the booze, bands, boogie, and burgers in the tent afterwards. The free hog roast is still the kind of slop my dog would turn its nose up at. There is a reason it is free. I was glad we paid for beers and burgers.

Oh, and Batman? Well, he is a mean drunk. That is what I discovered. After passing a guy dressed as Batman a few times he either bellowed in his public schoolboy voice “Away in A Manger” at Jen or “Little Donkey” at me. Lesson learned. Never meet your heroes. 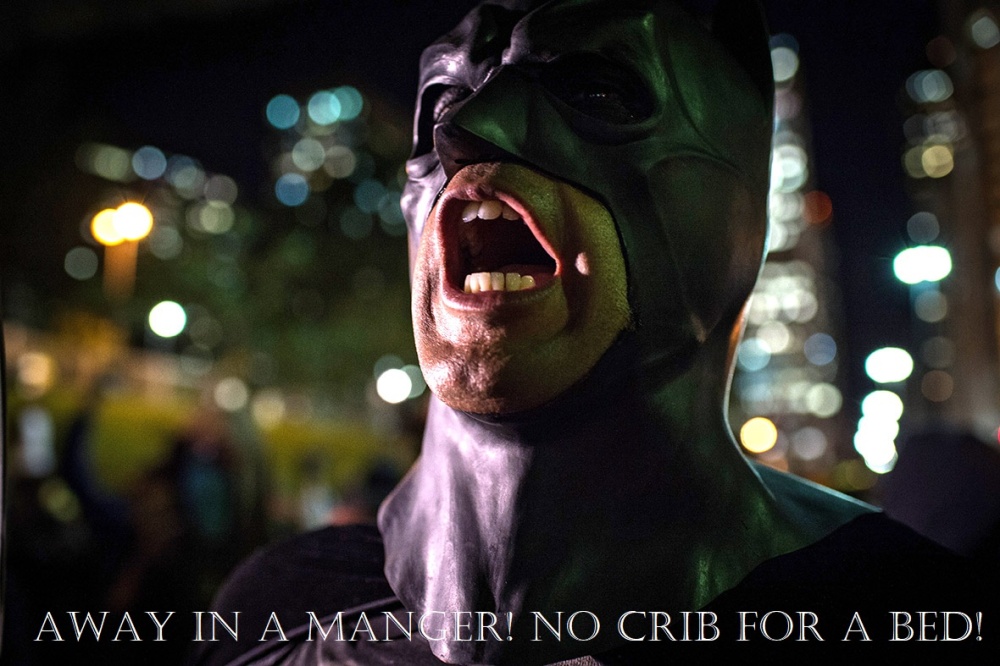 PBs at Bacchus work in reverse. It is about time out there having fun, drinking wine, dancing around a vineyard dressed like a twat. In 2016 the UKRUNCHAT unicorns ran it in 3.34. In 2017 we beat that. The larger group finishing in 3.54. But my god, we smashed it this year, probably thanks to the last CP, coming in in an impressive 4 hours 33. 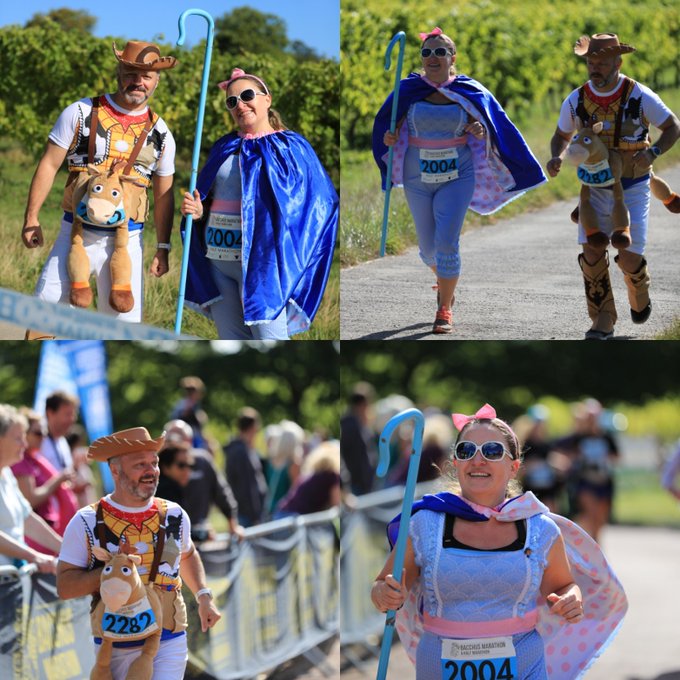 Same as last time, just different colour scheme. Bullseye seems to be proud of it. The tee is alright but won’t ever get worn. 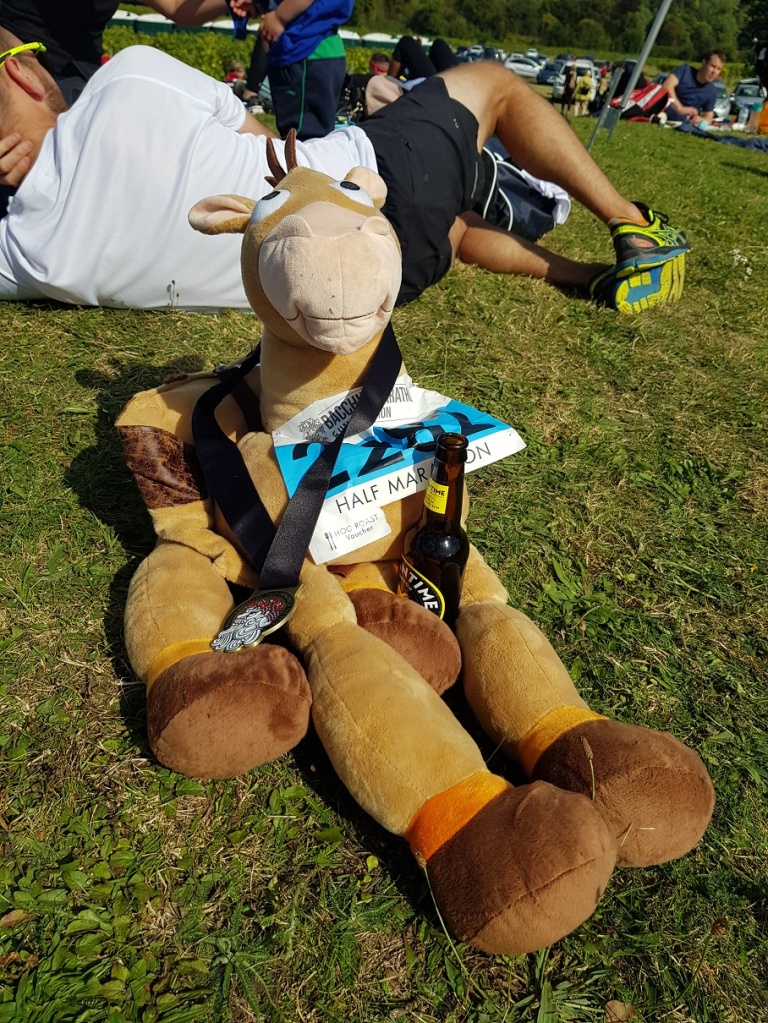 Despite not enjoying it at times the 6 glasses of wine, and band playing the race anthem (500 miles) recovered the situation at the last checkpoint. Picking paid for beers and burgers rather than the free wine and slop was a good choice too. But over all, looking back. the race has gone downhill in the last couple of years. The medal and tee are better, but the route it worse, far, far worse. The 10K meant fewer half runners. And there were so many people who took it way too seriously for a boozy 13 miles. When we ran it in 2016 and 2017 the marathon runners were rare, and those without costume rarer. Here? It could even have been as much as 50:50 in fancy dress vs not. And that is not what Bacchus is about. One of a couple of ladies we saw out on the course didn’t even know people ran it in fancy dress. How could you not? It is plastered all over the website. 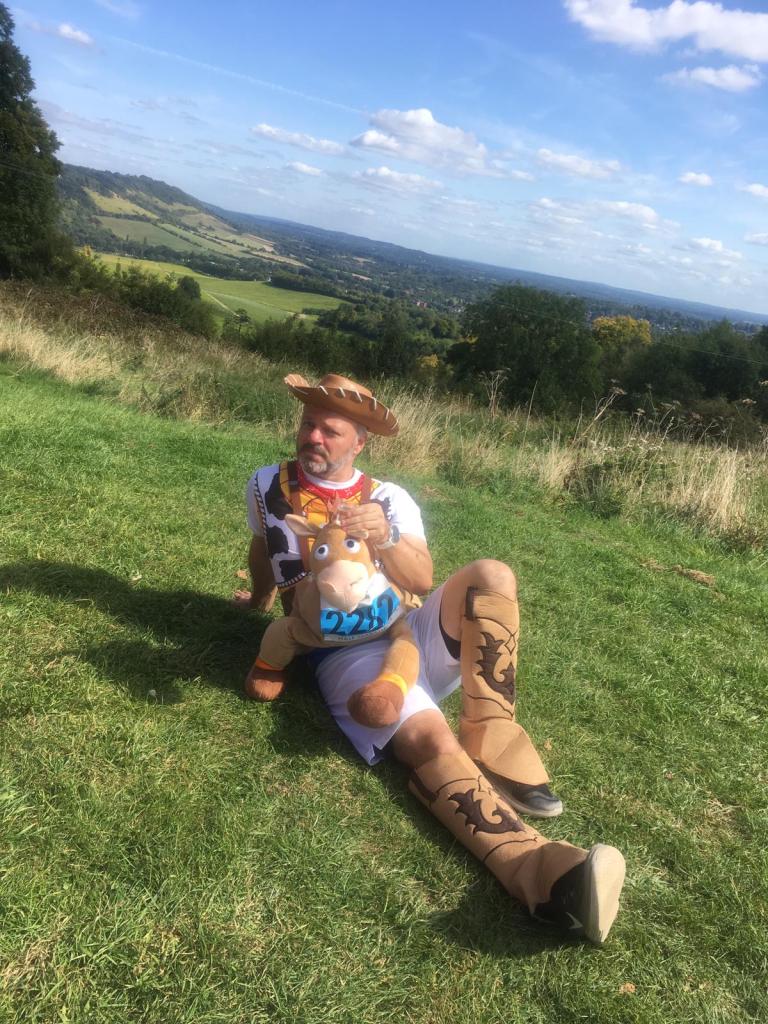 So I guess I didn’t love it as much as the previous years. But that is because I could compare and contrast 3 different runnings of the Bacchus half.

WOULD I RUN THE BACCHUS HALF AGAIN? Only with a big crowd

WOULD I RECOMMEND THE BACCHUS HALF? It is fun. It saves you going to Medoc or Liege. So yes. Despite everything.

With dear friend aiming for her first ultra at the age of 60.