When I ran my first marathon back in the autumn of 2015 I wanted a “thing”, you know, something to commemorate the achievement. But something that I could take into and from any future marathons as it was never going to be my one and only. At Berlin 2015, the 42ndrunning of the race in my 42nd year, they gave out wristbands and, of course, and being delightfully naïve about such things, I decided this would be my marathon thing and I would wear that wristband for every race. It reminded me of how far I had come, and that 42KM is just a distance, and one I had conquered before. I planned to get the wristband from all future marathons and to wear them on race days until it became too unwieldy but Manchester the following spring brought forth dark clouds and my parade was well and truly rained upon. No wristbands. I was a little disappointed to say the least. I now had nothing to take forward. I then had the brainwave to wear the prior marathon’s t-shirt at the next one. I could wear the green Adidas Berlin race tee at Manchester, and the blue Manchester race too to Copenhagen 6 weeks later. This seemed a good enough idea as any because even the smallest marathons I have done have race tees. But, ultimately that idea was binned at Copenhagen when I wore their misspelled Adrenaline is my Fuel tee.

Note: I have since run marathons that gave out wristbands but this was an all or nothing thing, and so I am sticking with the patches.

I do not remember when I finally had the BIG IDEA, I think it was leading up to Manchester. I always took the same canvas kit bag to races and, along with the wristband idea, I thought I would get sew on patches of the places where I raced 26.2 miles or above. It would be like the stickers you would get when travelling that you stuck to your suitcase. It would be my “thing”.

I always liked that idea and so I bought a Berlin patch retroactively and a patch at Manchester Piccadilly station on the way home after my second marathon. With the wristband failure my marathon “thing” was in my own hands (Oooo er, Mrs!), and with a bit of artistic license, I had my “thing”. It is part of my race routine. Before the marathon I find a patch and order it. I write the preamble of the blog, the bit about why I chose the race and the getting there bit. I complete the race. I write the blog. I put the medal on the rack. And then…. Yes, you guessed it, I sew on the patch. Job done! Robert is your father’s brother, and Myfanwy is your mother’s Welsh sister. Time to move onto the next race. No pressure. Easy rider.

But since then I have gained the following 12 marathon patches and 1 ultra patch, pushing the envelope a little when it comes to patch choices as I search eBay for the next one. Here are the patches to date, hope you like them.

And still I have more to come… 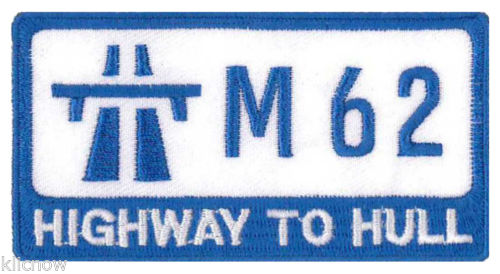 And all this is for charity. If you think this is good, or great, or amazing, then please please donate for Pancreatic Cancer UK here.