2022 is fast become a year of deja-vu. The race calendar, always subject of great speculation, before becoming an organic beast shifting it’s shape and size based on COVID and cancellations, has been concreted in and it is looking decidedly familiar.

In February, last time out, it was a rerunning of the Pilgrim Challenge.

April sees a return to Manchester, before heading to Devils.

May and I am once more in Copenhagen, before a planned trip to Edinburgh.

June and it is Race to the Tower again.

July will be something new and on the trails, as will August.

September and I am on the Thames Path before returning to where it all started in Berlin.

October and I am avoiding Beachy Head and running instead Loch Ness for a third time, and Yorkshire for a second.

Before ending the year on a couple of random trail events I am yet to book.

So, with this one, it’s a grand total of 9 of the 14 planned marathons and ultras in 2022 I that have run before. And with that comes the additional challenge of doing better than I did the last time out. The issue there, being that Berlin, Manchester and Copenhagen, along with being my first 3 marathons in 2015 and 2016, are also my fastest, by a long way. For me to get close would involve something special, i.e. training, which is now possible, as I have joined the Mornington Chaser run club and have already been twice, and am running two of them (Tower and Loch Ness) with my brother, Manchester with Jenni and Lewis, and Yorkshire with Jen, and having those guys in the same race always pushes me on.

And so to this one. The Amersham Ultra by XNRG, one of three XNRG races for me this Spring, and my first 50K back in 2018. It was my 20th race toward the 100 Marathon Club then and was, indeed, the race where I decided to go for the 100 marathon club. An hour slower than my 50K PB, but it set the bar. I loved the relaxed timekeeping, we have 11 hours to do it, on the Chilterns, and for this one I would be joined by my brother Jeremy, and my brother from another mother, Lewis.

We had all booked ourselves into the Saracen’s Head pub in Amersham, only to discover it was a good mile down the hill and through some very muddy woods away from the start/finish/HQ and the train station. Still, the the walk to the pub did help us decide whether we should wear trail shoes over roads, a question we had all been asking ourselves in the lead up to the run.

My brother ran London in 2017 when I signed him up and he swore off running. But last year he announced he was in again, and wanted to follow in my footsteps and start the endurance stuff for the sake of his longevity. Good on him. So last year I took him on his first ultra, day 2 of the South Coast Challenge. Despite painful flint scattered on the paths and a pig farm he still recollects with clarity, he enjoyed being out in the countryside. This year, his first full year of running I have signed him up for this, his first 50K, then Race to the Tower, his first multi-day race with camping, before heading up to Scotland for Loch Ness, which will be his first marathon outside of London. He has an exciting year ahead of him, and it was one of many,  many, many topics we covered as we headed out at 8, ahead of Lewis. 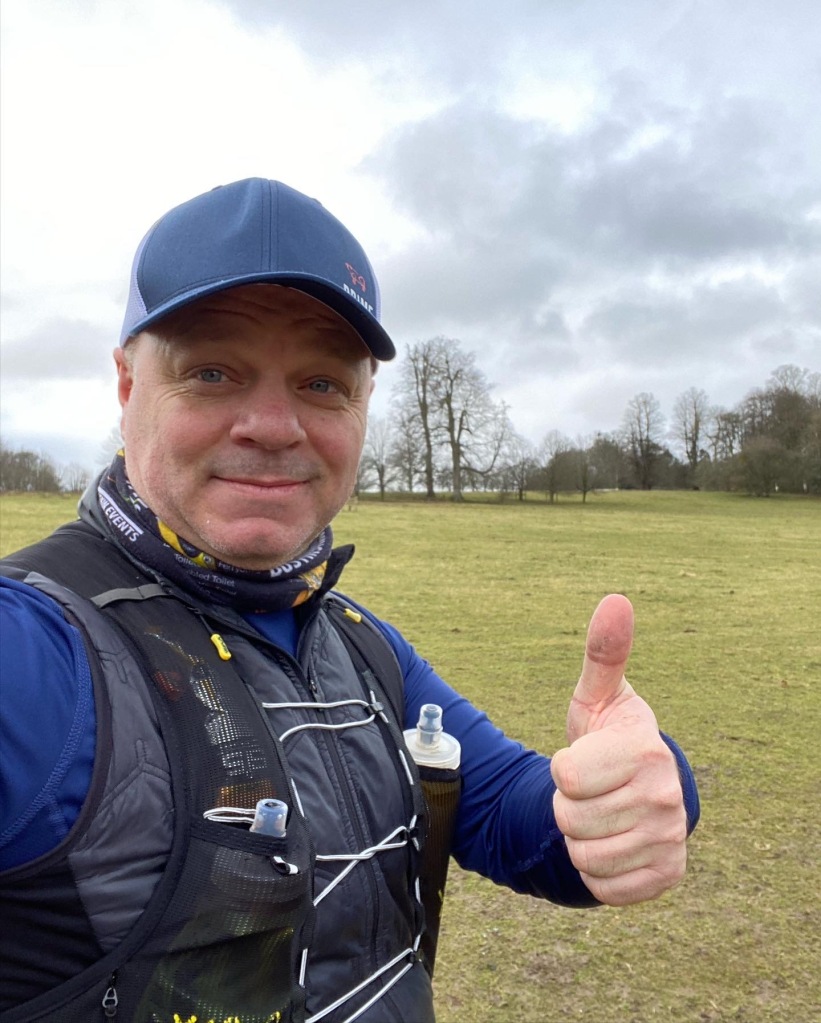 It was always going to be a tester this one. I gifted him my old Scott pack, as he didn’t have one, and wore my new WAA one from last time out. With his foot not 100% and my lungs still a big ropey after COVID and chest infections, we decided very early on to march it in.

I had wanted to beat last time out, but after losing my right shoe in the first two miles, and the going very claggy underfoot, it was clear a decent time was not on the cards. I would add that Coops ran by and gave me a shout and finished the hilly, muddy course in 3:56. Swine! 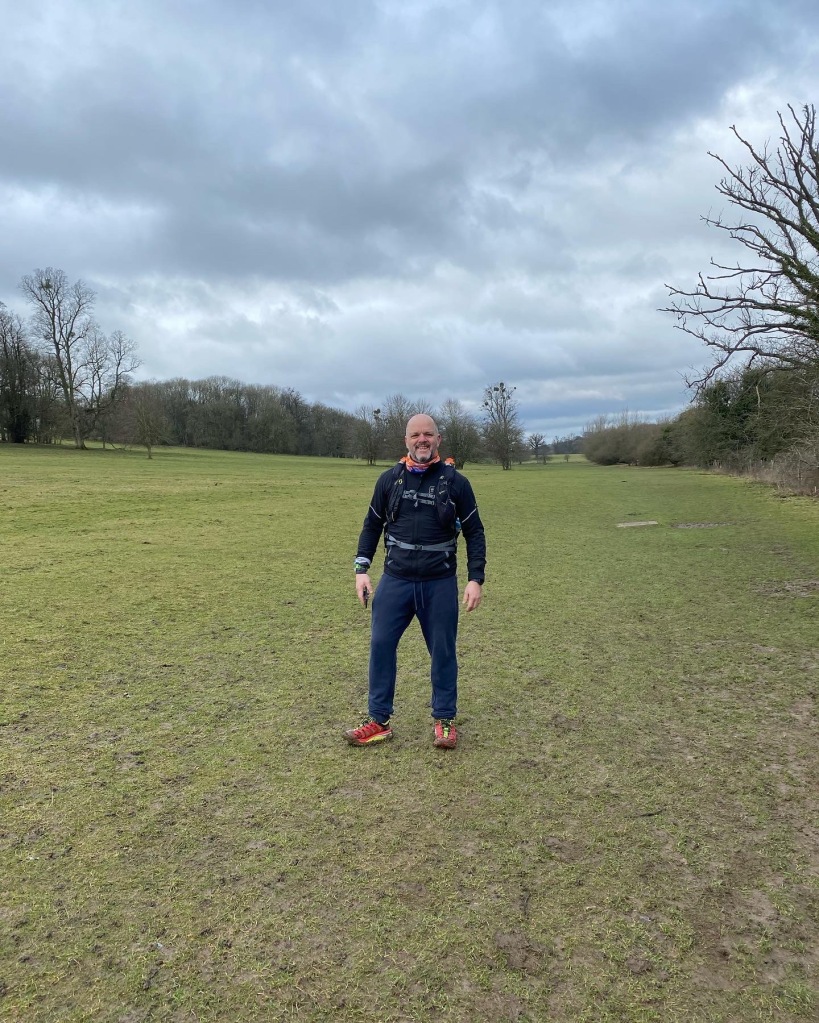 Our strategy was simple, just keep moving. We didn’t stop, we didn’t linger at the checkpoints, we marched the hills up and down. We did run at one point, but that was only when we saw the photographer. 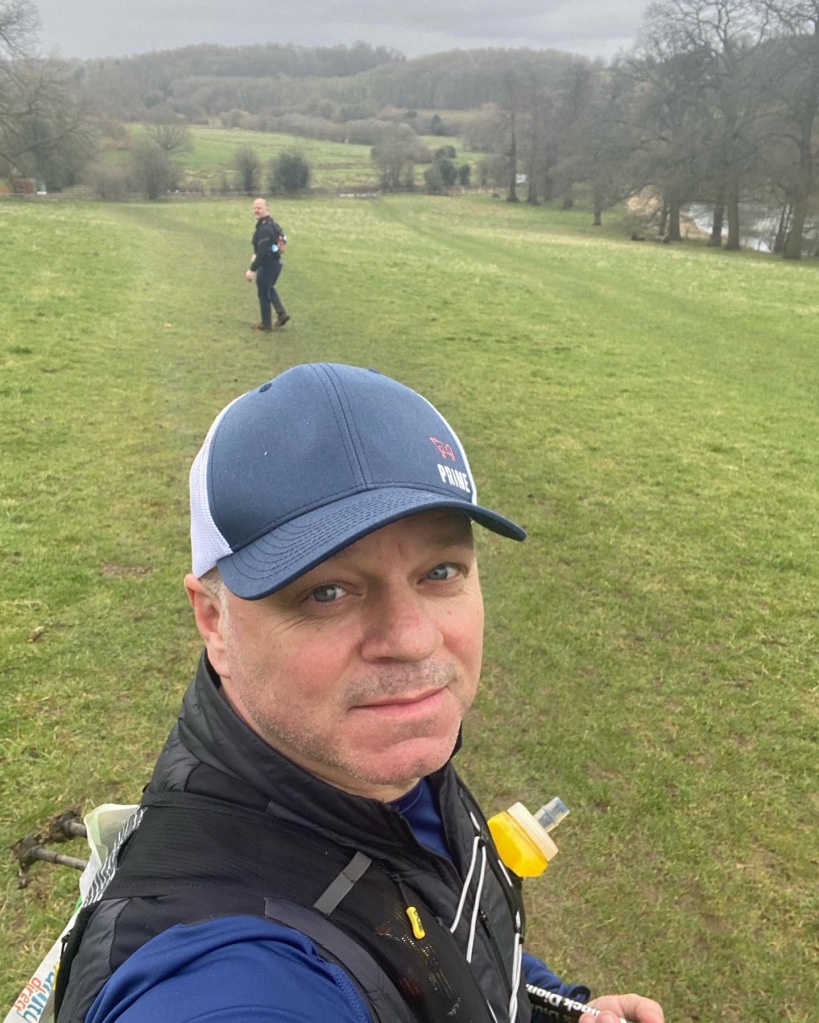 When we weren’t in the hills, on the constantly undulating route through the Chilterns, we were on barely passable paths and alleys. I lost my shoe just about here. 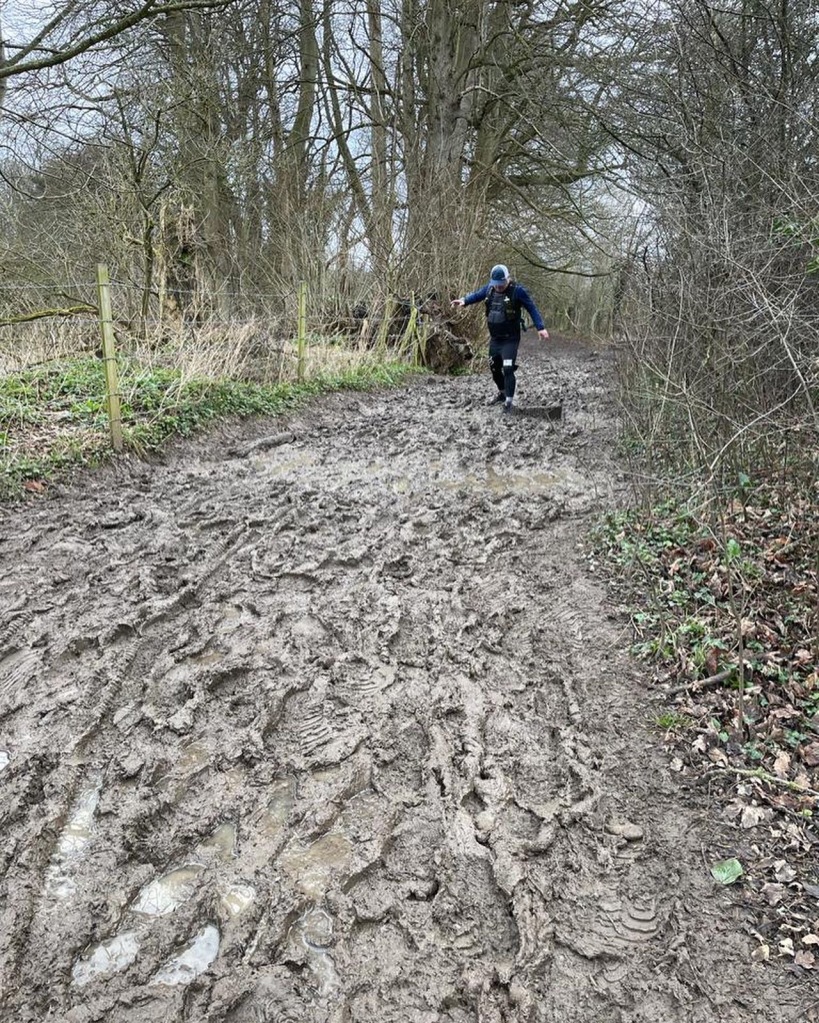 And it caused me to be more cautious from then on, including here at another swamp. 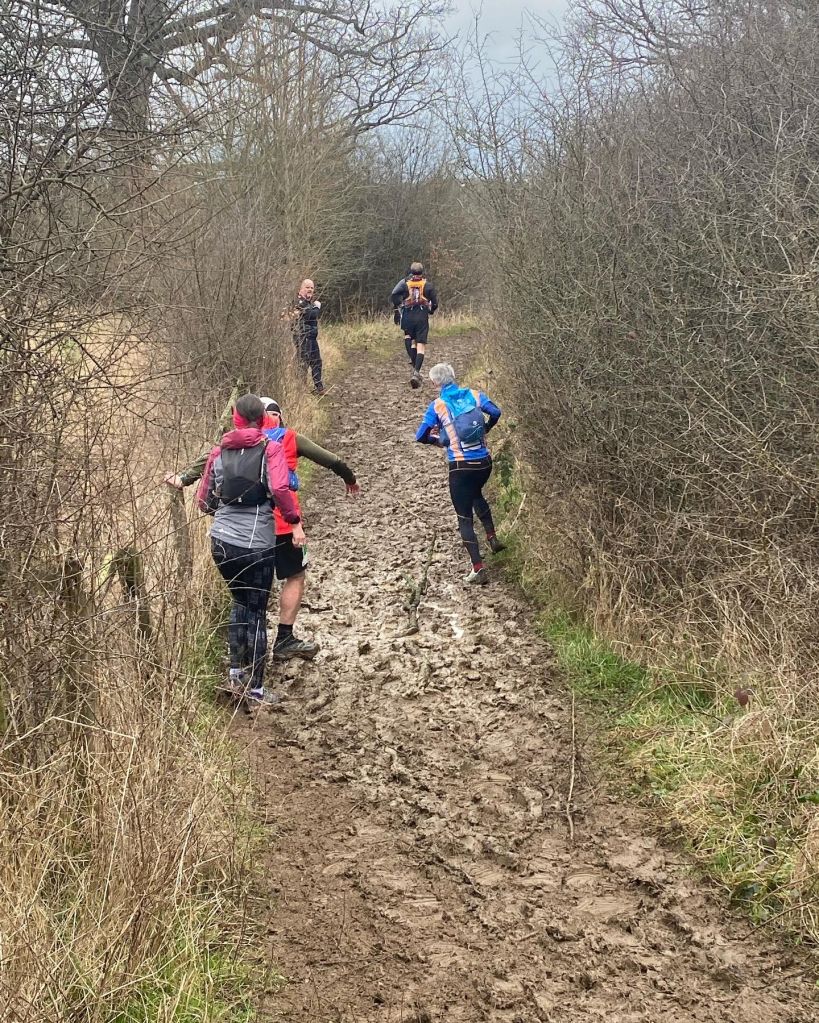 It challenged us both, and by 30K we were quite beaten. With the checkpoints roughly 10K apart I made the executive decision for us to plug in our headphones, put our heads down and soldier on for from CP3 to CP4. My thinking around this being that we both had motivational playlists, and this was the long, dark teatime of the soul for us, so we needed something to push us on. 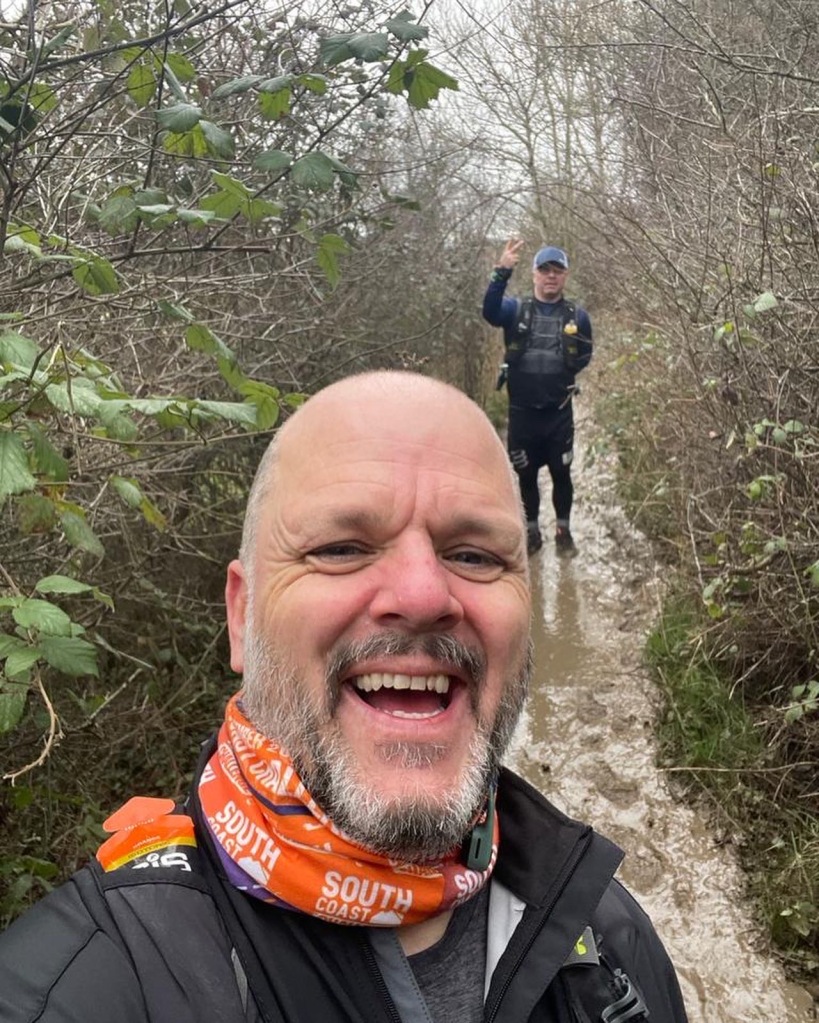 And push us on it did. We soon hit the last checkpoint and were then in the outskirts of Amersham. Familiar ground you could say, from the pub we stayed in, and then back up through the woods we passed through on the way there the day before.

There was plenty of huffing and puffing from both of us, heavy sighing that did make me reconsider putting my headphones back in, but soon enough we were at the turn by the school, avoiding my mistake of 2018 where I entered the school the wrong way and killed 20 minutes, and we were done. 100 Marathon club number 67 for me, that is 47 in 48 months since the last time I ran Amersham. And it was my brother’s first 50K. We will run more this year and we will be faster, fitter and better, but given our lack of training and recent sickness and injuries, I think we did well.

It is wooden, which is fine. They don’t need to be metal anymore. I think we are both happy with it. 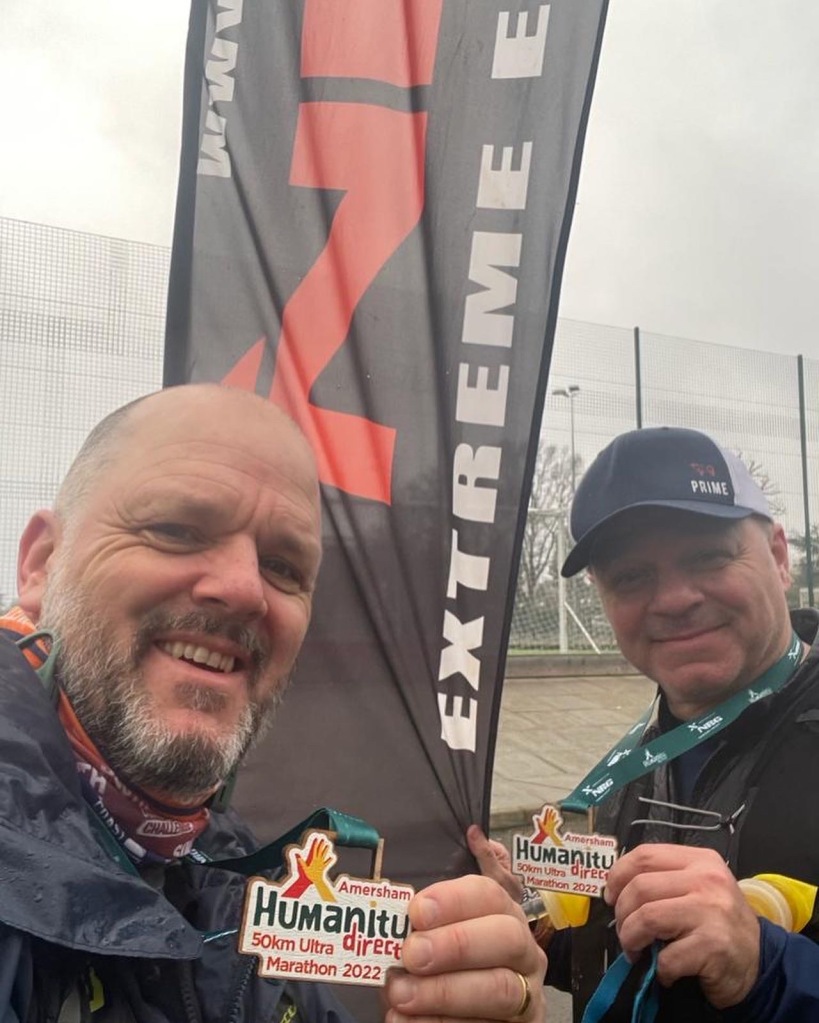 At Pilgrim Challenge last time out I didn’t do as well as I had hoped, slower than 2019 when I ran it by 26 minutes.  This was an hour and 14 minutes slower than 2018. It is disappointing but I think we got our most difficult races out of the way early in the year. It was all about finishing, and realising we need to work harder to get through the year. I certainly need to up my game when I have Manchester on April 3rd and am by no stretch of the imagination “road fit.”

I would run the Amersham Ultra again and I would recommend all the XNRG races. Tring is perhaps my favourite, but I am hoping for baked hard ground and sunshine for Devil’s Challenge at the end of next month.

Next Up: A Phoenix Lap Race where I am not going to run a marathon, but rather 3-4 laps (9-13 miles) in prep for Manchester.