I have been a bit remiss in my blogging duties. I started the podcast (the Hundred Marathon Club) in Lockdown 1.0 and have been doing that ever since as the primary outlet for my running life story. I enjoy it. I like writing it, finding new ways of making it more interesting, or fun, or funny. I get other people involved, and interview my brother as he embarks on his marathon journey 2.0 in October in sort of an “and now the weather” segment.  And thus, the blog has taken a bit of a backseat. I missed writing this one, and had already run the next ultra before I even got to go back and write the review. Still, I am here now. So let’s get it on.

London 2 Brighton is an Ultra or Action Challenges event, much like the South Coast Challenge, and Thames Path, Chiltern 50 etc etc. And these races are designed with charity walkers in mind.

And it would be the last race of the Government Roadmap where we cannot stay on hotels, so much like Hurtwood 50 and North Downs Ridge 50, I would be getting a train to the start. Although, rather than the 5.30 start and tube then overground to Dorking, this was a half hour hop to Richmond. Simple. And when we arrived? Temperature taken, medical/covid waiver signed, bag dropped (for free!) and we were allowed out early as the start pen system was so goddamned efficient.

From Richmond to Crawley, or just outside Crawley, the route left the Old Deer park and followed the Thames for a very long time before taking what can only be described as a very lumpy way south.

But first, before I could enjoy one of the hottest days of the year (yes I wore a vest for the first time since goodness knows when and my current tan lines are comical), I had to get through the herds of walkers. The issue here being that these events are catering to runners, joggers, and walkers, of which I am a bit of an amalgam. And they let the walkers out first, as they will naturally take longer to finish but, and this was it, the runners catch up with them pretty quickly, on the narrow paths and towpath at the Thames, and have to come to a grinding halt before edging around them and speeding up again. 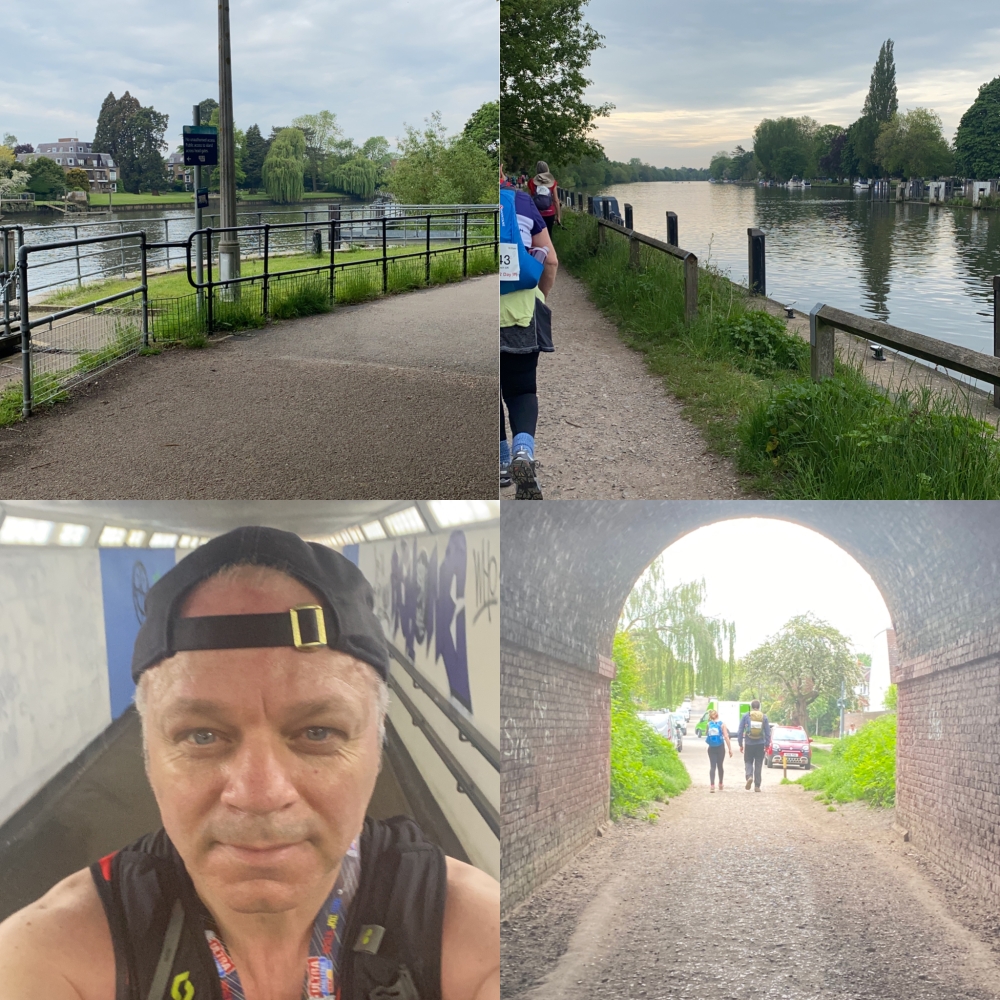 It took the first 10K through Richmond and Teddington to move through the herds before the countryside opened up and the runners were left alone with their thoughts, the sun and some very widely dispersed checkpoints.

To be fair, having to slow down and trudge before dodging the walkers was fine. It was the first 6 miles, or 10K, and it was effectively a fartlek warmup of sorts.  But once I got out of crowd and into the lanes and woodland paths, it was great. I used the Coros watch again, set to 800M run, 200M for 56 iterations and just kept plodding, working from checkpoint to checkpoint, and spending very little time at each. I only filled my water in one. I went straight through the first. I had a cup of tea at another and the KMs kept ticking over.

And I did just keep on swimming. I knew it wouldn’t be fast. It was also 56K, which is technically the second longest distance I have run (twice), after the 100K of RTTS. It meant I could work out in fractions how far I had gone a lot better, but that last 6K, when you beaten, sunburned and have been on your feet half the day, it is an hour walking, an hour longer than you would normally spend on your feet.

Chucked in the box with the rest. 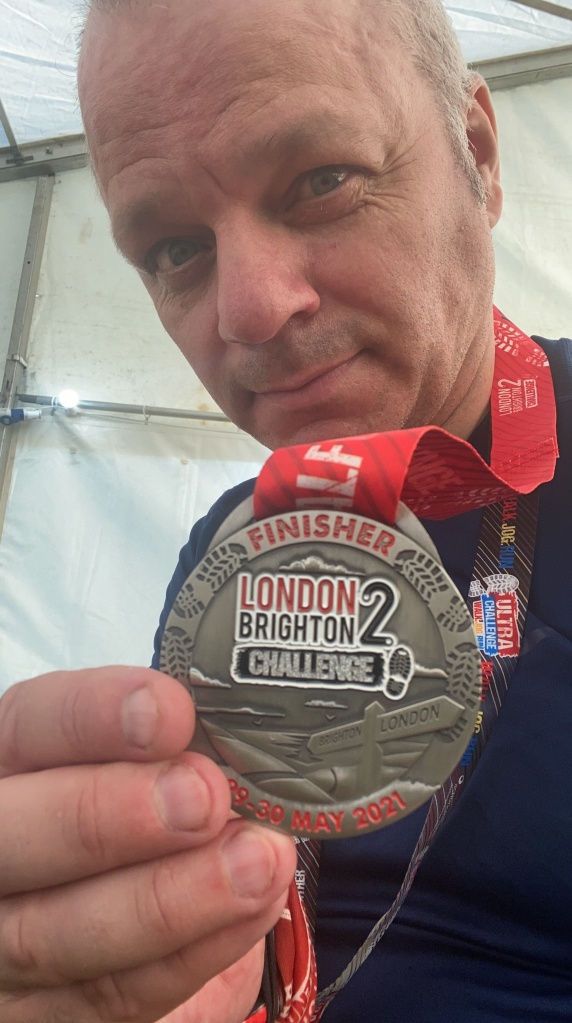 Race overload is about to start but I do need to plod on. We have lost so much time due to COVID that any opportunity to race should be grabbed with both hands. Me? Well, this was 3 in 6 weeks with another the week after. I did ok but this was always going to be a slow one. It was faster than South Coast Challenge, but only just.

Would I recommend the London 2  Brighton?  For runners I would not. It is a very expensive race and absolutely not worth it. You could pay for 2 or 3 other races for the same money. If you want to just plod and are feeling flush then sure, a chunk of the field is walking, some are dropping out a quarter of the way. You will be one of a small number of runners and joggers.

Would I run the London 2 Brighton again? Given the year we had just had, I would probably run any organised ultra or marathon again if there were no other alternatives (excluding lap races, as I am done with them). So yeah, I would if I had to.

NEXT UP: Run to the Sea Brighton