It’s on like Donkey Kong. A fortnight after the year’s racing started at the Hurtwood 50 I found myself returning to Dorking with an overwhelming sense of Deja-vu. It would be the same organisers, same setup, same tent in the same location, same toilets, same race and timing chip, same one-way system, same checkpoint goodies, and some of the same runners for what would ultimately be 100 marathon club number 53 – the North Downs Ridge 50. 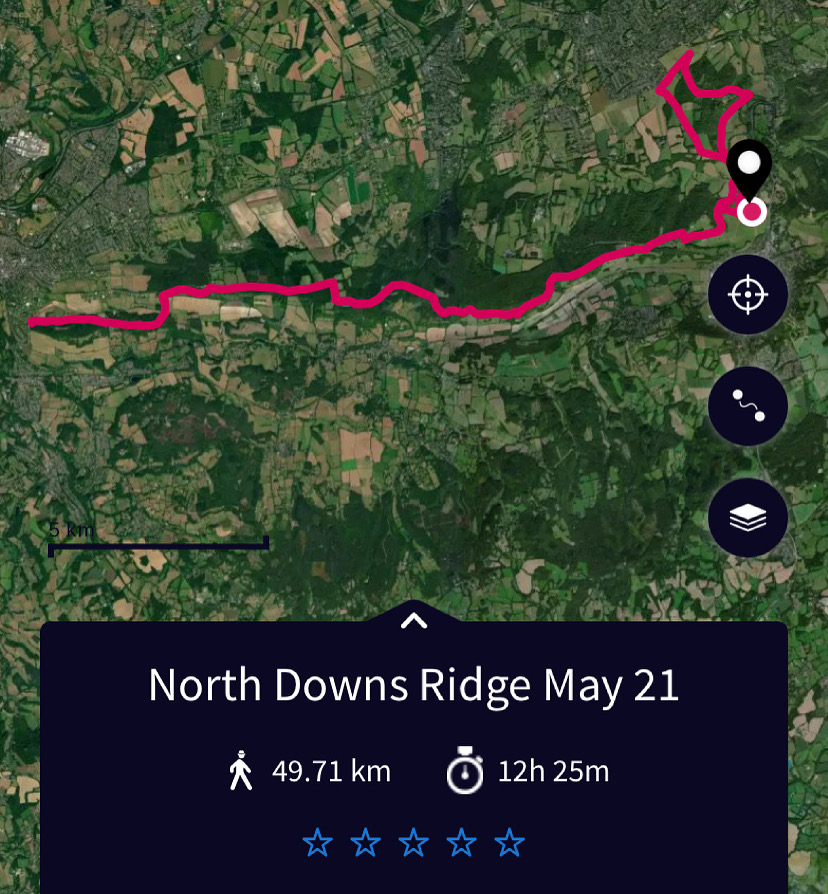 The similarities did not stop there either. After a short run around part of Denbies Wine estate the race would head out into the Surrey countryside, taking in the North Downs Way, as well as part of the route covered by Hurtwood, Pilgrims Challenge and Bacchus.

Albeit with a different set of challenges. This one would have 2/3s of the elevation of Hurtwood, but only half the peaks, meaning the climbs were longer and steeper. Still, with familiarity comes comfort and when comfortable you relax. I had the same kit, same shorts, same top, same cap,  same pack with the same nutrition. I was going to rely on what you know, Joe, to relax me into a state of calm, and controlled confidence, enough to help me achieve my goals. 1. Finish. 2. Finish with a better time than Hurtwood. 3. PB. No chance on the last one given that was achieved on the near flat/downhill Run to the Sea Bouremouth last year.

I did arrive a little later than last time due to National Rail being up the swanny. I would ordinarily get the train from Victoria to Dorking, taking less than an hour. But this time I had to go via Waterloo, a more direct tube from my part of London, but then the overground into the countryside took much longer.

Still I was only 20 mins later going out, after collecting my number, timing chip, and leaving my drop bag in the same place as last time. 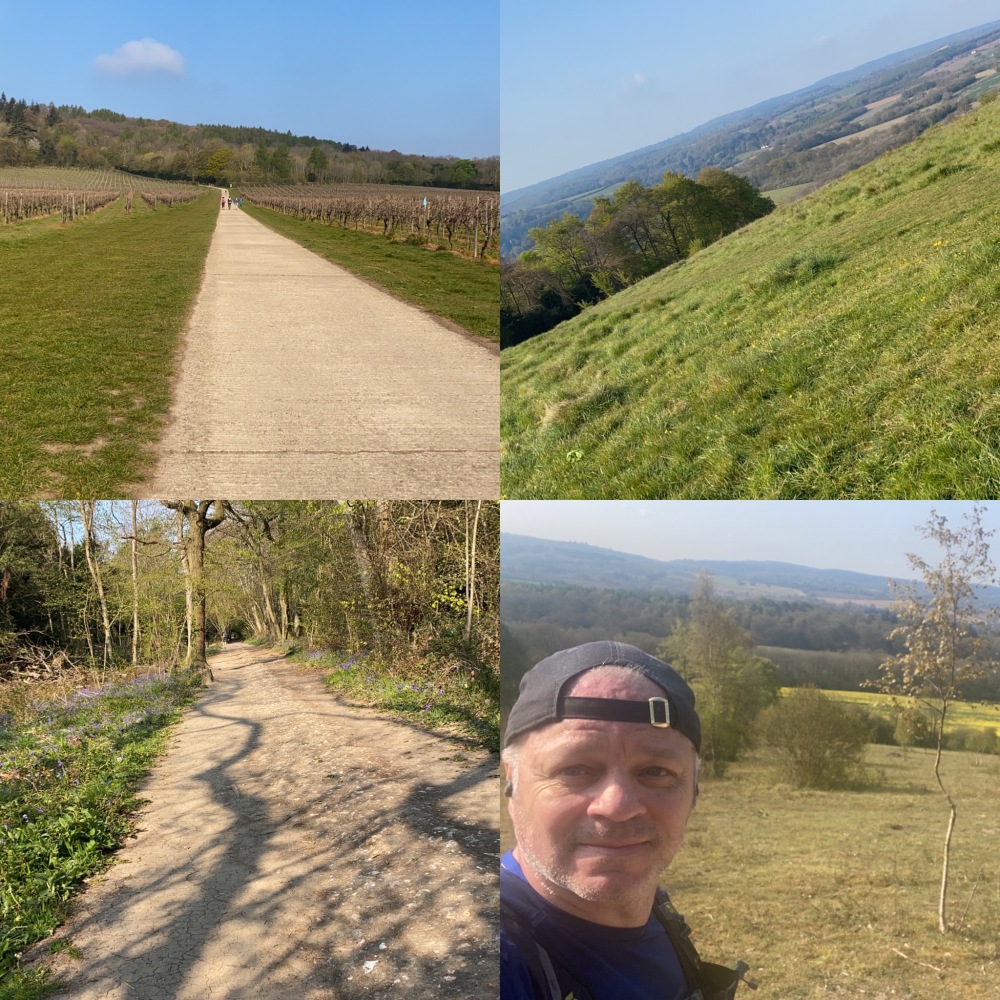 The Coros Pace watch was employed this time out. It does have a great battery life, is very easy to use and has some great interval settings that I often use, but recently in Hampstead and the local London hills it hasn’t been the best at finding GPS. This is the reason I binned it for Hurtwood, relying instead on a combination of the 26.2 app for intervals, Nike Running app for distance, OS Maps app for direction and Apple Music for my sanity. It did, however, kill the phone battery, causing concern about it dying before I could use e-tickets on it to get home. And so I tried again with the watch and was very glad I did, not least because around the 5-8K mark when changing the music from 50 Cadences of the US Military (a great album to keep you plodding when you would rather do anything but) to a subset of songs from the Now That’s What I Call Music albums of the 1980s, I must have hit pause on the Nike Running app, as from then on it gave me misinformation. So now I had the 800M run/200M walk interval setting set for 50 iterations on the watch to keep me going. 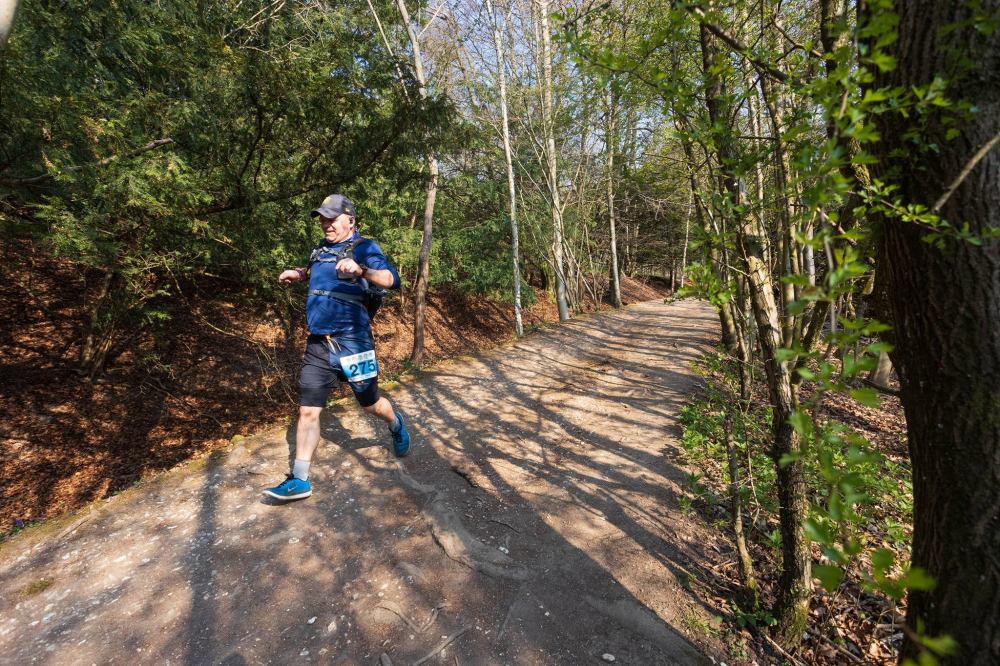 And keep me going it would as 5K turned into 10 then 15. And I met up with an old face from social media and my days on Twitter. We greeted each other cordially on the trails after I caught him up. He must’ve gone out in the 20 mins of runners ahead of me. It added a 4th goal. Beat Frankie. Healthy competition whether with other runners or yourself is a great motivator. And so I kept that one to myself as I surged by him and into what was a 5 mile there and back that was two and a half miles downhill, and then two and a half back up. 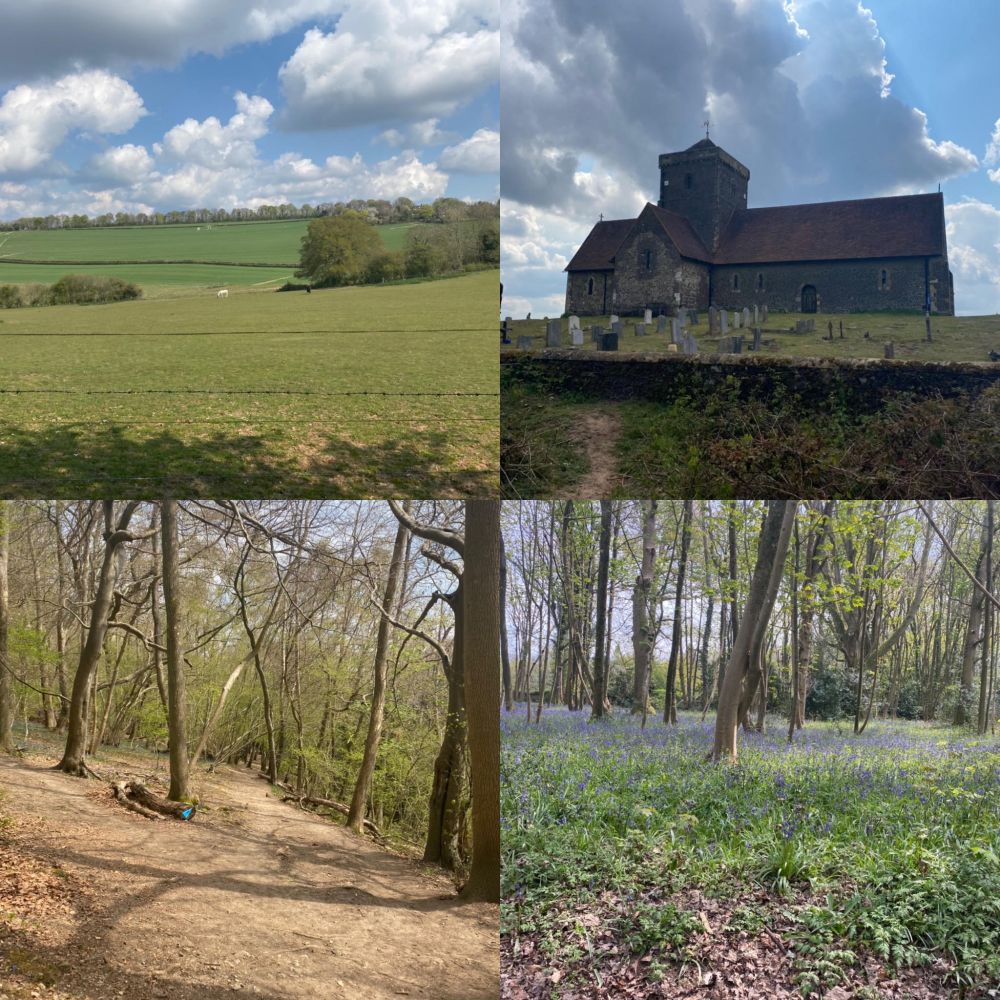 I did feel better about this one, although the hills were a killer. As the KMs ticked over and we, being me and the conga line of a runners around me including 3 as a purple wearing team who kept passing me (or I passed them) on our run/walks, reached the last CP at 40K comfortably. The next bit was miserable though.

After coming up to the finish, and the entrance into Denbies from which we left, the route veered away and we had a 10KM there and back that was half uphill and half down. And it was an energy zapping killer. Still, we knew this was it and so we power marched the uphill 5, and then ran the downhill all the way to the finish.

When I ran the Serpent Trail a few years back Freedom Racing medals, or at least that one was wooden. I didn’t mind that. The new medals look great though and when I decide to put the 100 Marathon Medal rack up they will not look out of place. 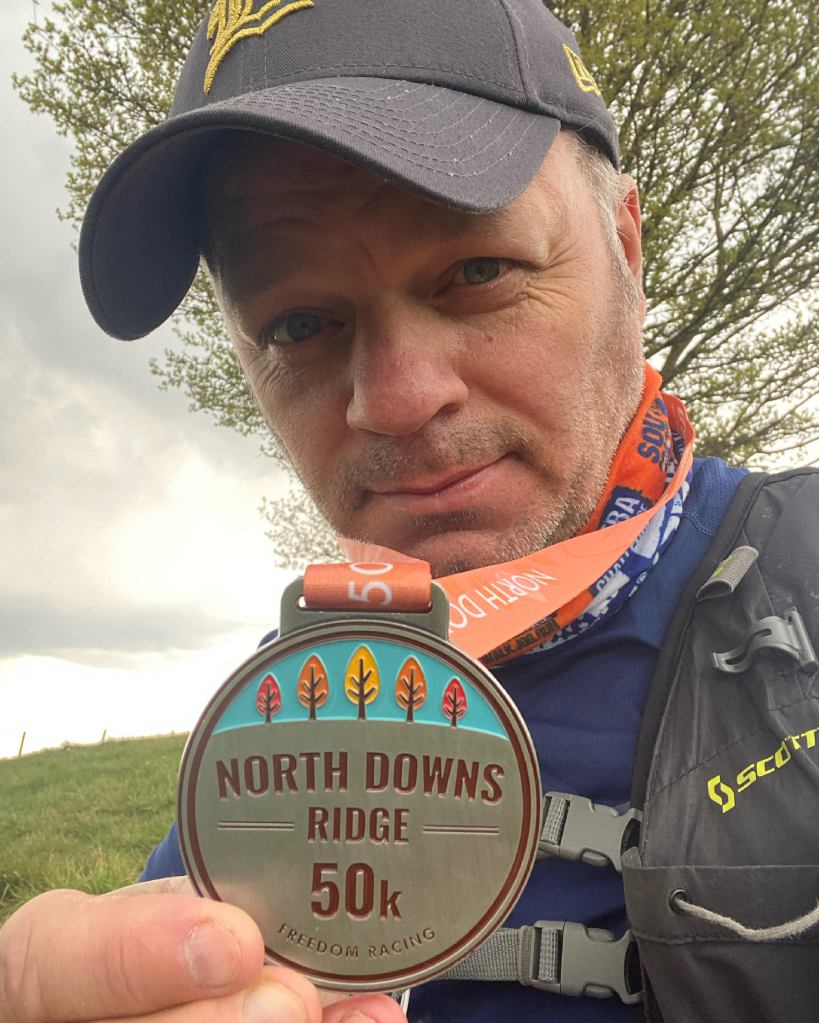 I mentioned when I ran Hurtwood that the first two races of 2021, and my planned 21 races in it would likely be the toughest. After all they had 7000 feet of elevation between them, and would be at the start of the year, when my training had been a bit off, and COVID still ruled the world. And I was not wrong. I know the road races that start for me in September and the other trail runs I have planned, even the multiday ultras will have a lot less elevation.

I am glad I got them out of the way first. It is easier to get over disappointment by following it up with a success. And I do plan on doing much better next time out.

And so to the race. To be honest, if I was shown a mashup of Hurtwood and NDR I would be hard pressed to tell you which is which for the most part, other than the obvious turnarounds and churches. They will, no doubt, merge into one in my head over time and I am ok with that. They were both a means to an end. They were well organised, COVID aware trail races in Surrey, with decent routes through stunning countryside, happy marshals and decent CPs. They were not a carbon copy of the other but they were close.

I would recommend them both with their COVID Denbies start/finish, and when they and we all get back to normal later this year.

LONDON TO BRIGHTON (DAY ONE)