When I first started this running business 10K was a million miles away from where I saw myself. OK, not a million miles, more like 6.214 miles away if you are being pedantic, but it may as well have been a million. I couldn’t even manage 200 yards on the treadmill at the Virgin Active at the Barbican without walking.

So running that first BUPA London race on the sunny May bank holiday weekend of 2012 was a rush. The crowds, the atmosphere, the medal, the personal achievement. I ran Sheffield, then London again at the British 10K. And once you are comfortable, or no longer feel challenged, you up the distance naturally. Halves. Then full marathons. You have made it. Congratulations! Collect your subscription to Runners World magazine and sample pack of SIS gels at the door. Get all the gear, as you have no idea what you’ve started.

YOU have reached the pinnacle of running, so to speak, or that’s what you naively thought. But when there at that apex, you want it to be tougher. You choose Trail instead of road. Fuck road. Fuck it’s well maintained surfaces that are easy to keep your feet on. You want to slip and slide and fall arse over elbow at every opportunity. Hills next. No. Fuck hills. Little moundy bastards. We want Mountains. The Alps. How about biting wind? Torrential rain. Mud up to the tuchus. Snow? Snow on mud up to the tuchus in the Alps. With a nigh impossible cut off time. With new shoes. With blisters. With a cold. Carrying an injury or two. The danger of failure.

But vulnerability isn’t weakness. That is what I think. It’s brave to go into something that doesn’t have a guaranteed outcome. And you, pointing to my listeners in a Lord Kitchener manner, You want that challenge. You want to chance of failure, because when you cross that finish line, my god, it is glorious.

Why do you think people followed me to Portland? It wasn’t for the views.

The challenge for me, now anyway, is the 100 marathon club And so along with a fellow 1190 runners I would be back in Eastbourne for what was Number 51 of my 100 Marathon Club quest, the Beachy Head Marathon 24th October 2020

Including the largest assembly of my running crowd since the Liverpool Rock n Roll marathon a couple of years ago including Jenni, Lewis, Rachel, Michael Avery, Baz on cheer duties, Kyla, Clare, even though she couldn’t run, JK, Whiffers, Seagan Sarah, and Keith Miller.

It would be slightly different this year, the last two sisters of the Seven Sisters would be avoided due to a combination of gale force gusts of wind and coastal erosion, a fact that we missed in the joyous haze caused by a race actually being on. It would be almost entirely on trail, over the South Downs Way at the start, heading west from Eastbourne, hilltops and farmland, heathland, and the occasional small village.

There would be steps, two sets, and then after Birling Gap, the nightmare of 5 of the 7 sisters and Beachy Head itself as we headed back to town.

I can’t really hide my disappointment, and I you will be relieved to hear that I don’t plan to. This was a divisive race amongst the crowd. Jen and I had run it before and had both done well (relatively speaking) when we did it in 2016. For the others the challenge was new. And so  Lew and Keith loved it. And the others wanted revenge on the race for their performance.

After a PB at 50K twice since COVID I thought the target of my 2016 finish time was both achievable and likely. How wrong I was. And this was despite me doing things better this year, including walking that first evil hill rather than trying to run up it like last time,

But after the start, and seeing Clare for the first time in I don’t know how long, I stopped having a good time. This was my 6th marathon or 50K in 11 weeks and I was feeling run down. One a fortnight is doable but what with work and life and the Coronavirus I felt spent before I had even got going.  Not that you can really tell is some of the race photos. I did run for a chunk, walked the ups and ran the downs as per.  And from time to time it looked like I was doing ok.

And this was a stark reversal to how I actually felt. Sure, the KMs ticked over and I am an old hand at this now. My 3 DNFs of Comrades, Ultraks Matterhorn and Shakespeare Raceway Marathon all occurred in the space of 3 months back in 2017. I have run 37 marathons and ultras since those DNFs so I know how to put my head down and get it done, regardless of whether it makes me look like I am walking away from a penalty miss at a major football tournament.

4000 feet of elevation. That didn’t really help matters. The new trail shoes seemed to work. They are Scott, a brand, coincidentally that I discovered at Ultraks Matterhorn. But it was the climbs combined with the mud and the swirling wind that always seemed to be in your face that caused me to slow to a trudge as I hit the two sets of steps and clambered up them. 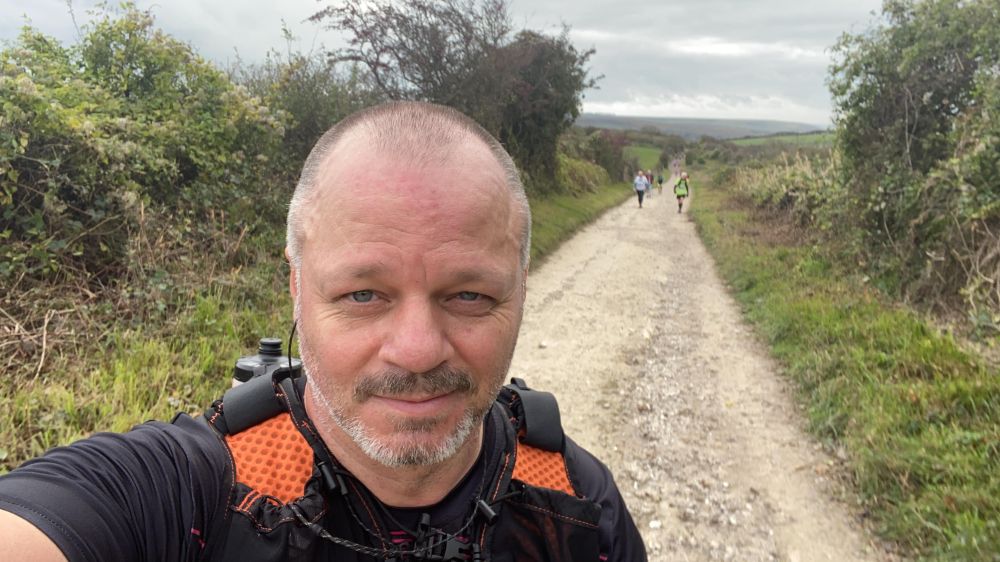 People were walking pretty much all the way. I was surrounded by people from my wave. We ran when we could. We walked a lot. I made the use of a portloo at the bottom of the hill as I sipped from my bottles of SOS and Tailwind.

The kit choices were a bit of a disaster to be honest. I chose to use the Orange Mud Double Quiver that has two bottles high on the back and two pockets for your phone and a snack or two. There is no further storage. Starting at 8 in the morning it was cold, and there was no bag drop, so we wore waterproofs and tracksuit tops. You should, though, dress for the second mile, not the first. And a mile in and I was sweating like a monkey.

I had to take off my waterproof top and headband and buff, but then I had nowhere to put them. If I wore my 50K vest I would have had space. As I had the Double Quiver I had no space. It meant there was an awkward few miles after I took off my quiver, losing the bottles down a hill, and fighting with the waterproof top in the wind, before eventually tying it around my waist. It kept slipping down and so I ended up rolling it into a ball and just carrying it, with the second buff around my wrist and headband around my hand. All very awkward. 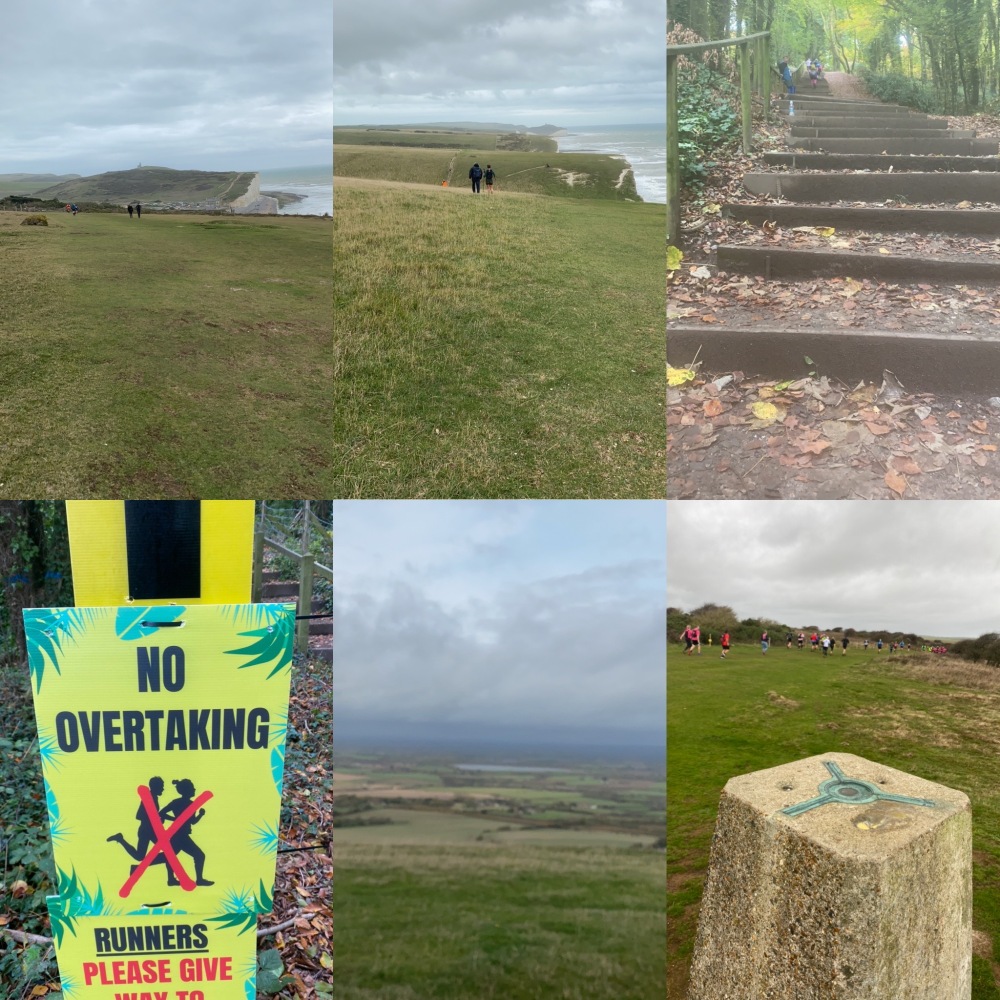 And, eventually, all very unnecessary as the wind got up the closer we got to the sea, and it even rained briefly so I put everything back on again, taking an age in the wind to wrestle my waterproof back on, before going up and down and up and down the first 5 of the Seven Sisters. Yes, we were spared the last two, and were then on flat trail all the way to the final hill, and down to the finish line a shocking 45 minutes slower than 2016.

Certainly an improvement on the 2016 medal. 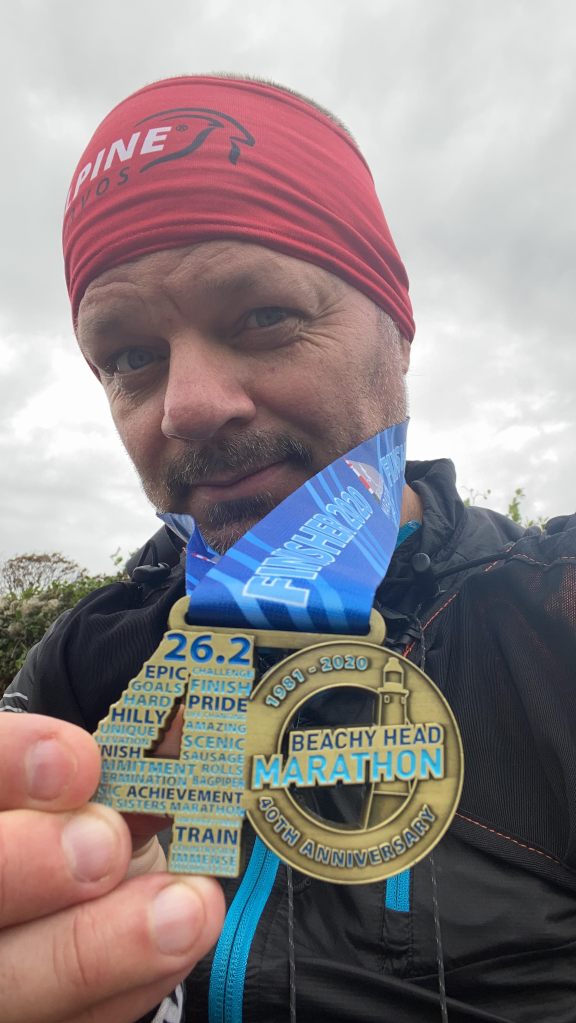 Scores on the Doors

It somehow scored better than the last time I raced Beachy. Goodness knows why.

Given my recent improvement at 50K, with my PB coming down by 25 minutes at Round Reading and then another 23 at Run to the Sea I had high hopes. But you cannot take anything for granted. The shoes worked but the wind was against me. The hydration pack was a mistake and the lack of hill training didn’t do me any favours. It was good to see JK and Clare on the Sunday and I am glad to have gotten over the hump of 50 marathons or above toward the 100MC.  But I do see this as a missed opportunity to put some shine on a shit of a year. Still, we can’t have everything.

Those running it for the first time seemed to love it. But they love the challenge. Those of us running it again found it tougher than before and probably would stay away if asked to run it again… subject to another race being booked the same weekend.

Would I recommend the Beachy Head Marathon? Yeah, but I also managed to convince multiple people to run Portland, so don’t listen to me.

Would I run Beachy Head Marathon again? Maybe, but it would need to be in good weather after a hot summer so the ground is hard.

NEXT UP: XNRG DRUIDS CHALLENGE