I am quite excited about this one. Not in a Michael McIntyre bounding across the stage like a demented rabbit kind of excited, more sedate, more me. Maybe I will try to write this with less cynicism in honour of the occasion maybe less downright disdain for the whole concept of running given that this race means I can finally quote Jon Bon Jovi and say “wooah, I’m half way there”… and God knows how I got here.

And I would be running it with an old pal. Having run The Round Reading Ultra with Lewis, and the Chiltern 50 with Jen, Run to the Sea saw the return of the Hinge and Bracket of running, the Statler and Waldorf of jogging, the Cheech and Chong of the long walk, me and Colonel Bogey himself Keith Miller.

It is the other RTTS. Not race to the stones This is a run to the sea starting in Ringwood and ending in Hengistbury Head on the coast, having run the very straight and very long Castleman trail. And it would be organised by Ultravoilet Running, the team who brought you the very COVID aware Round Reading Ultra, that started my post corona racing life. And it could have gone terribly if it hadn’t been for Keith. 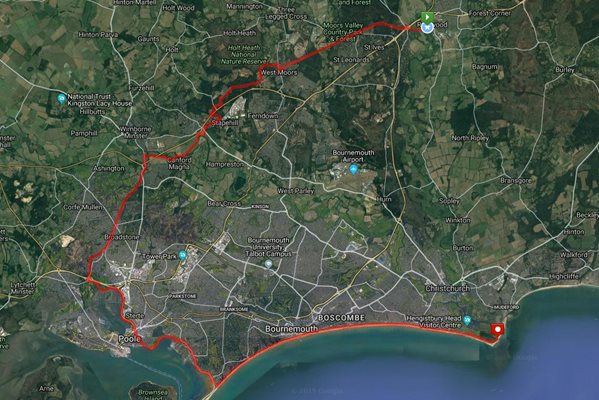 The weather had been pretty bad of late, a week of solid rain had dampened my spirits and made a lot of people and a lot of things angry. And by things I mean wasps, for on the Sunday before I was stung in the mouth, not the face, not the head, in the mouth by a wasp, leaving it’s stinger on the inside of my lip and causing a reaction that made me look like Homer Simpsons dad had lip fillers. It swelled so much it nearly closed my right eye and my right cheek became a jowl and hung lower than a Tory’s morals. And that wasn’t the end of it. What with the bad weather I had packed my new Scott trail shoes that were completely untested and would likely cripple me.

Fortunately young Keith is 15 mins from the start and told me the route would be 99.9% on either path or the seafront, and that other 0.1% would be a field, maybe two and he would be wearing roads and that advice alone made all this possible.

The start, in darkness as it was, was very familiar. It was the pen system of Round Reading, 6 at a time, your number denoting your wave, moving forward 2 mins at a time before you were off. 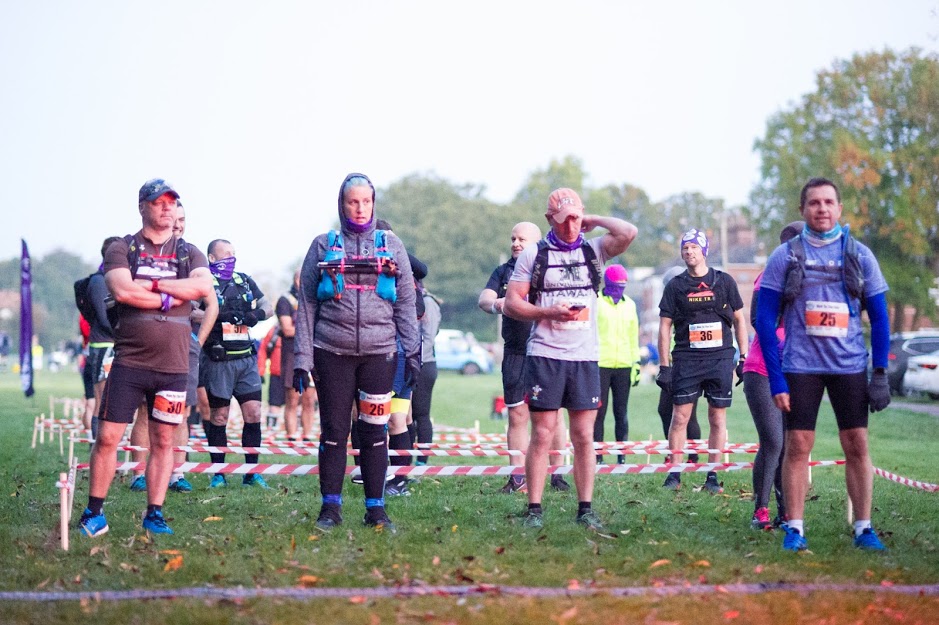 But before I was off I had to complete my morning ablutions. I can’t even eat at 5.30 in the morning let alone eat, and my digestive system is in hibernation for a good two hours after that. I couldn’t go at the house, forcing it would have basically prolapsed me, causing that whole human windsock thing and so I left nature to do her thing and fortunately, with 10 minutes before my start time, she did, and I was very very relieved of that. The pasta and meatballs meal from the night before would have felt like running with a bowling ball in my lower intestine. And then we were off, in our group of 6. And oh my god, it was on stony trail, dead straight, so straight and flat and samey it could probably be seen as being dull, Keith did say as much, but I was glad. It would be straight and flat and on path, forget the muddy hills of the Chiltern 50, I would really have a chance to motor towards number 50 and I did… 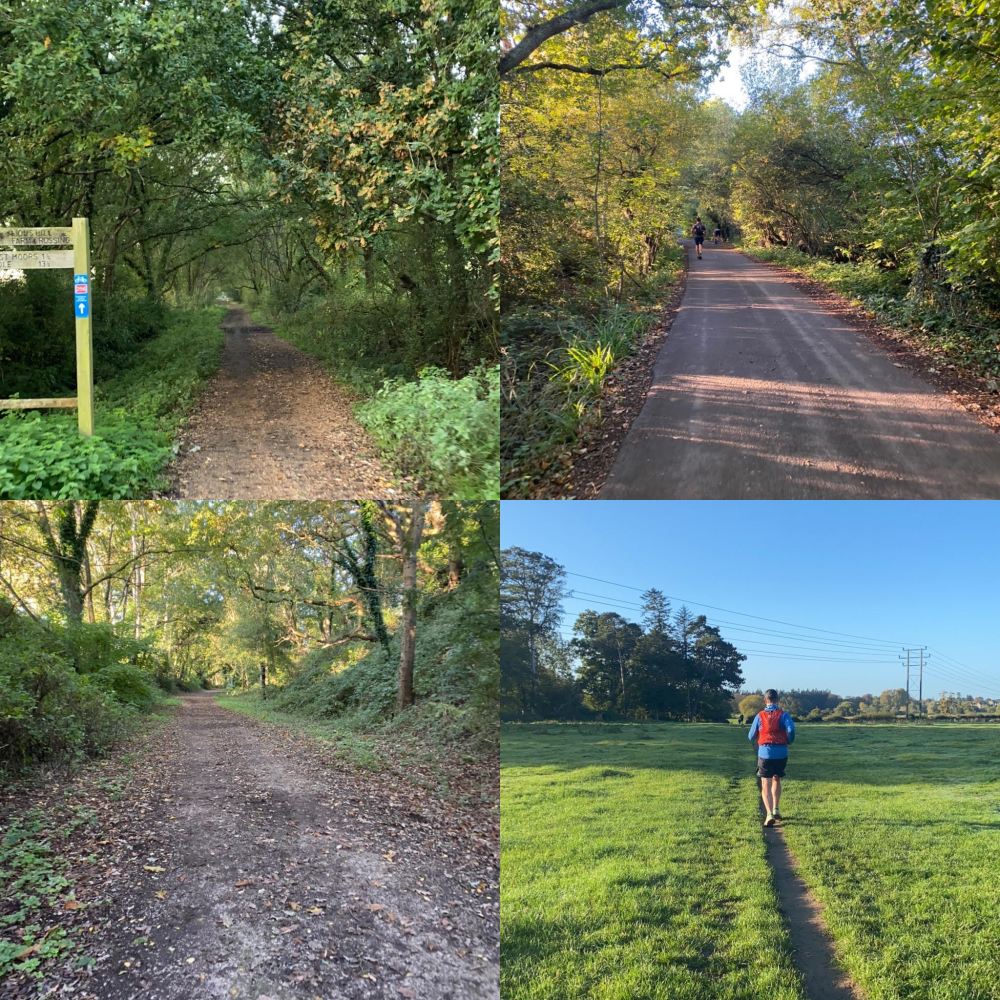 And the aim was to keep in front of Keith for as long as possible. And he and I have a history of races. We met because he needed a head torch for the Threshold series, that I had completed. We first met in real life in a pub near his work in Westminster and I leant him mine, before we had another meetup after he had finished with it closer to my work by the Tower of London. We enjoyed the spectacle of running the Athens marathon together. And he had decided to go full rabbit for Portland coastal in my second year of running it, by wearing a bunny ears and cotton tail. When we ran Green Man, with me running the 30 and Keith the 45 we stayed pretty much the same distance apart the whole race. 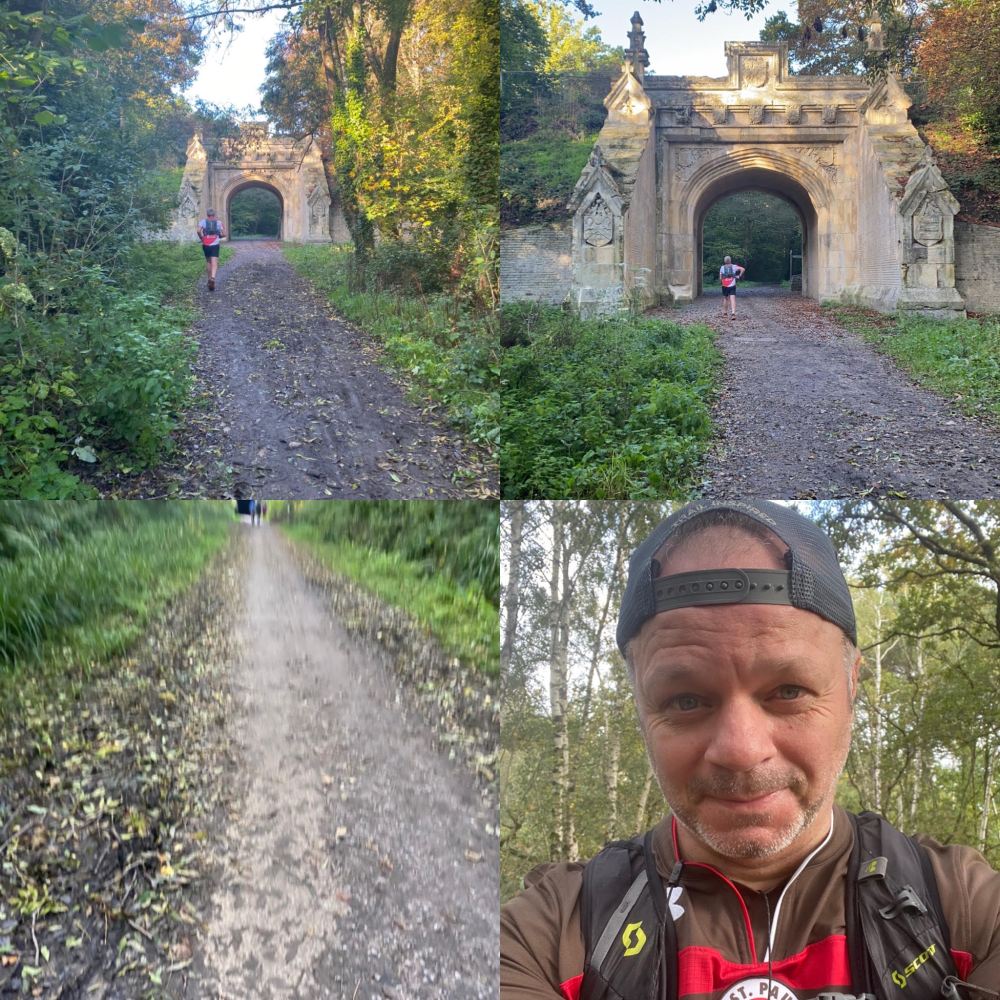 Keith however had been training, having signed up to complete the 100 mile grand slam series with Centurion running in 2021 he had coaches, he trained. I was now just barely a runner, who used a peloton to keep fit between races. He had the upper hand, but by jingo I wanted to somehow stay ahead of him.

When I ran the Round Reading Ultra with Lewis I had a 45 minute headstart, I expected him to come haring past me by 15K but somehow I stayed ahead until 34K. I only had a half hour start on Keith, so we would see how long the chase would last. What is the bike race where one heads off first and the others chase? The pursuit. That’s it. This was a pursuit, just without bikes, and two slightly hungover middle aged men running. 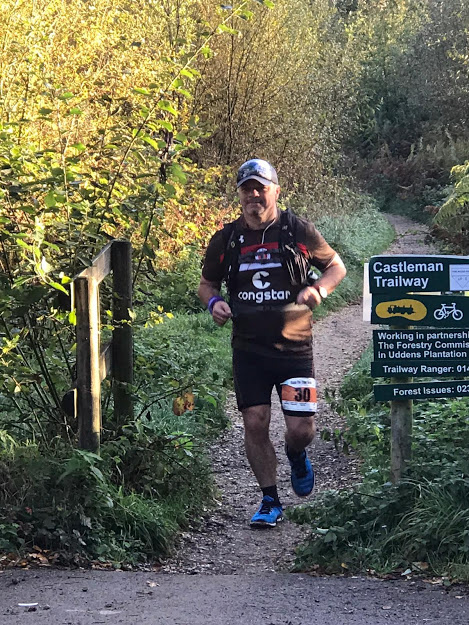 Unlike Reading, where at times it did feel like you were alone on the route, here there were always runners around you. It geed you on. As we went through the occasional field, more paths, more road and then back on the straight as a die trail. Plodding along. Tunes on. Glad once more of the opportunity to run a real race rather than a virtual. 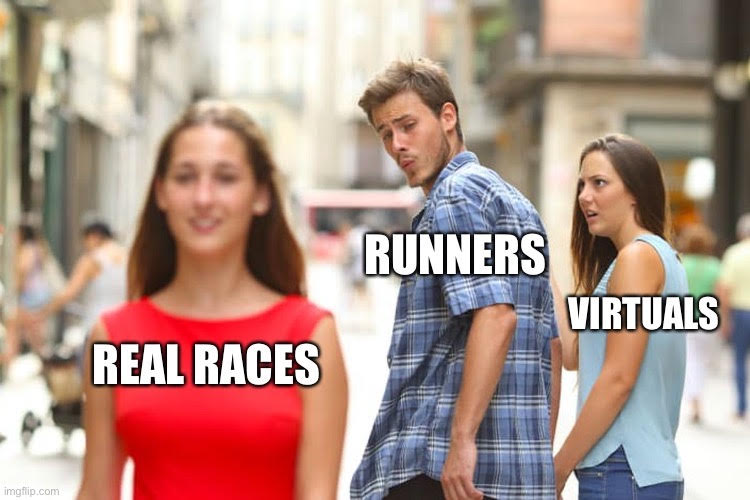 You did have to stop at the checkpoints, or at leas head over the timing mats. The first CP was just before 10K, the second at 18K. And then there was a gap of 14K before the third. Not that it really affected me. I had the Scott vest on with two large bottles, totally a litre and a half of Lucozade in one and coke in the other, with a small can of the new coke energy drink in the pack itself. It meant I could keep on running.

Yeah, that was odd. I got to half way at the Chiltern 50 in a decent enough time for me, but for a minute, well a good few minutes, I stared at my Coros watch and thought, I am an hour ahead of that. I am gonna smash my PB to smithereens here. Well no, I still have 5K to run. It was a 50 after all, not a marathon. Twonk. But, you know, inevitably I did get there…

Half an hour ahead of Chiltern but only 10 minutes ahead of schedule if I were to beat the 50K PB I gained at the Round Reading Ultra only 9 weeks earlier. I hadn’t eaten though. Breakfast was a no no for me. Keith, bless him, had made me a bacon roll but I couldn’t eat it. So I was at 25K and starting to flag. I do need to sort my race nutrition out, and I have plenty in the calendar to try different things. Here though, I was feeling a little sick, from lack of food, too much coke, too much water, and maybe the wine, beer and moonshine from the night before. It didn’t stop me though. 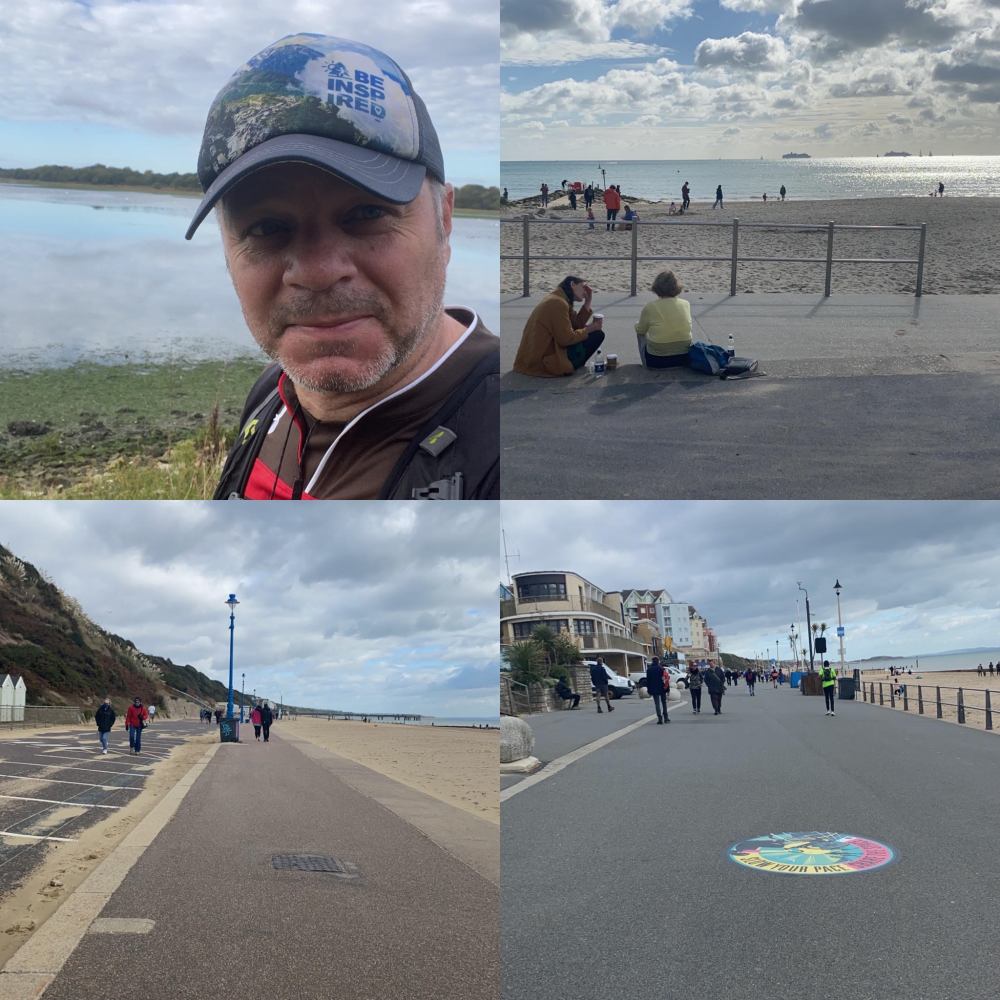 And as if by magic the trail race was finished and we now had to head along the seafront all the way to the finish. The crowds didn’t make it easy though. Lots of old shuffling south coast types made us zig and zag our way along paths until ultimately, at 32 K, maybe 33, just before the 3rd checkpoint Keith came past and any pressure that element of the race gave me was gone. But it was then replaced by something much more personal. I was still running, well run walking as I hit 35K. 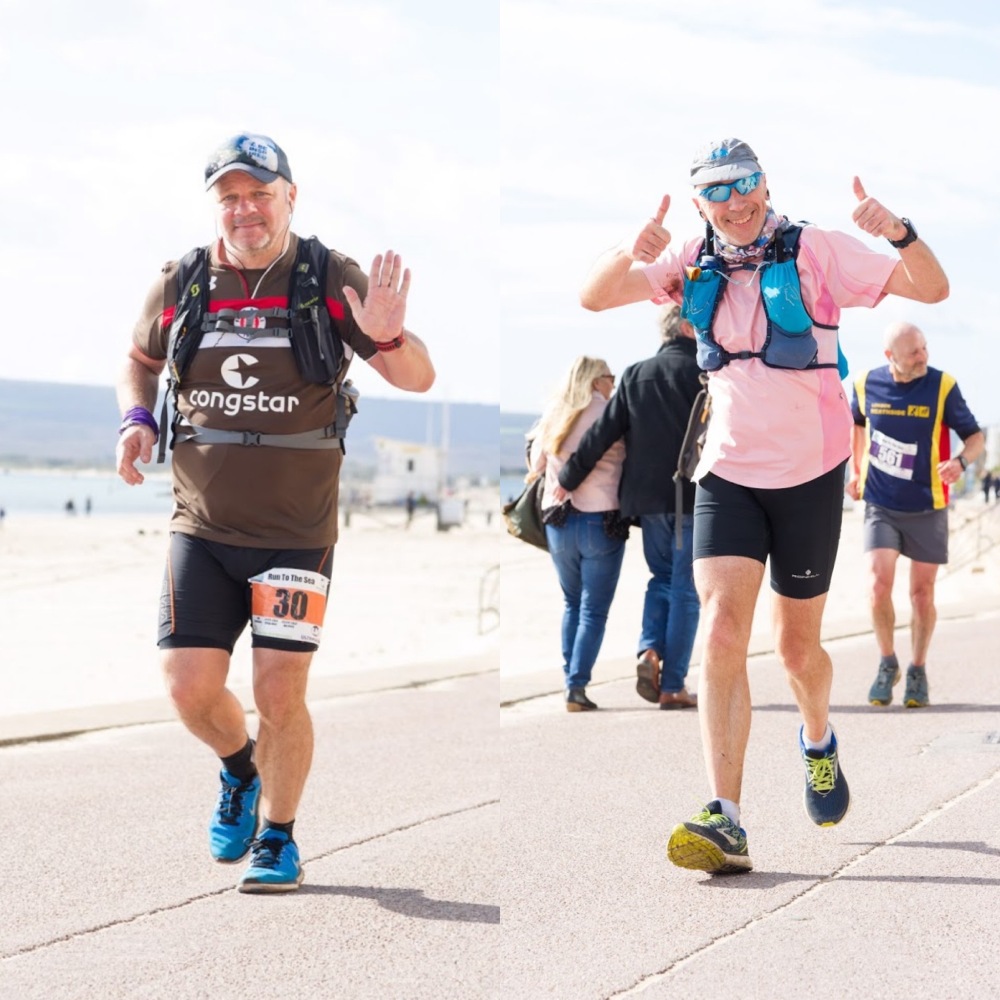 Let’s go surfing now, everybody’s learning how, come on surf safari with me. Well, people were kite surfing, wind surfing, paddle boarding and enjoying a pretty sunny midday along Bournemouth’s beaches as families huddled in their little beach huts, people were advised to be cautious and avoid the groynes, not sure what, or who the groynes are, maybe the local pikey family with 10 kids, and a snake of runners, all pretty beaten by now keep ambling along. 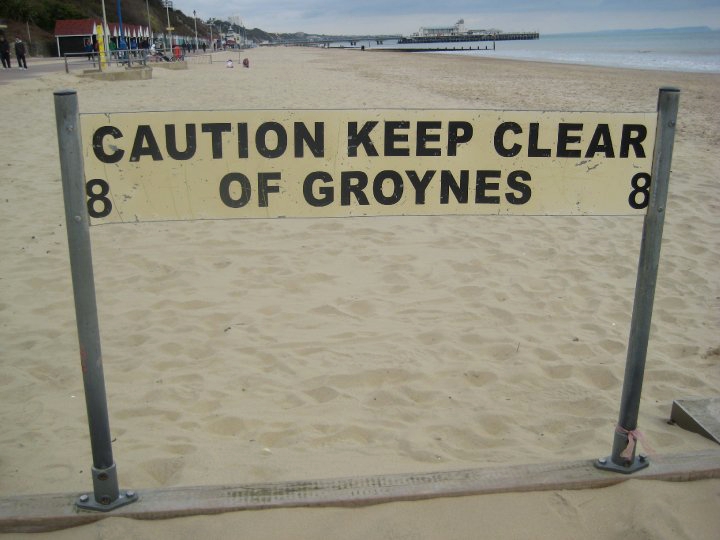 I saw Martin Yelling going for a jog, I had hoped for a nod, or some recognition as he passed us, but alas no. That would have been a shot in the arm, and one that was needed as I dropped to a march rather than a run/walk with one eye on the clock.

The last 5K lasted forever. And I was not alone in thinking this. A couple ran by asking where the finish was. I had no idea, Hengistbury Head, the nature reserve and archaeological site was much further away in the distance, and we were not allowed to finish there, so we hoped that the car park closer would be the finish and it was, just after hitting sand dunes, sandy paths that slowed us down and then undulating hillocks all the way to the Ultraviolet running flags. I kept going, I was there and… According to the results I may have been the slowest Darren and the slowest Smith, but I was the only Darren smith, and I beat my previous PB at 50K by 21 minutes too. 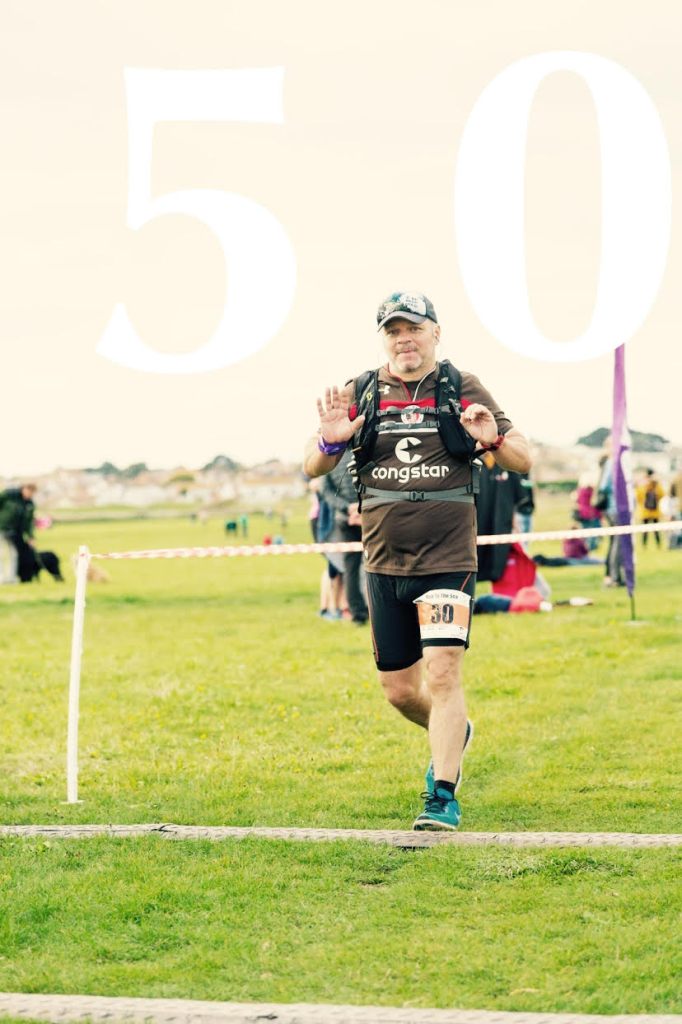 I had reached the 50, 50 marathons or above in 5 years and 13 days. A second PB at the distance in 9 weeks, 5th race in 5 weeks too. I was still disappointed by the nutritional element. I do need to work on that. I can’t simple run 35K and then burnout for the rest, walking it in. I need to add that extra 15K to my arsenal. Back to back runs at the weekend will do it, breakfast of porridge oats and dried fruit? I don’t know. Something is needed though. 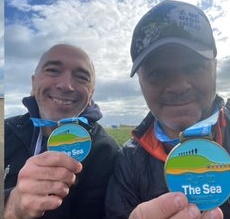 I liked the first 30K, along the Castleman trail. After the mud and the hills of the Chilterns a straight as a die trail path was so good. I could have gone faster by a good half an hour and that is my aim for the rest of the year, with 3 50Ks and a marathon to go. I need to knock a few more minutes off the 50K time to put a cherry on top of the cake.

I would recommend this one though. This is my second Ultraviolet race and both were ideal, very well managed and organised and safe, which is the most important thing in the world of COVID.

WOULD I RUN RUN TO THE SEA AGAIN? I may, if I had no other options.

WOULD I RECOMMEND RUN TO THE SEA? Yes, especially when the pandemic is over.

And finally did we celebrate? Well… what do you think? 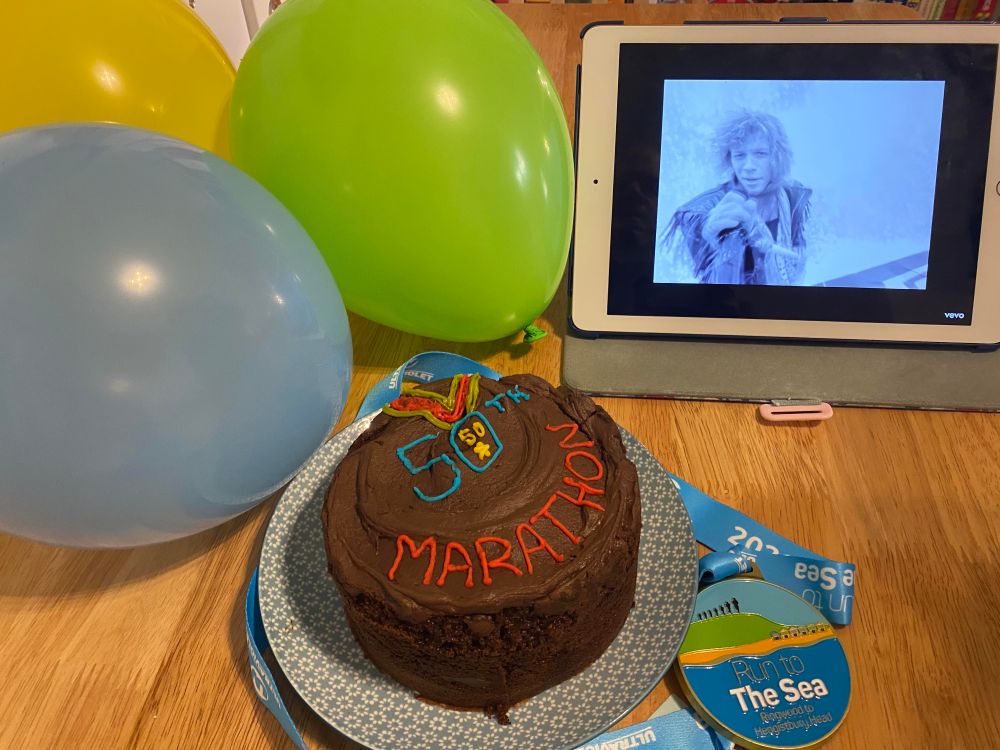