Remember that thing I have re closure? Well, during my period out with injury and whooping cough I bailed on a number of races. I “bungled” as is the common parlance nowadays, although with good reason. Of those two were Saturn Running races, 6 hour lap races that would be marathons that would count towards the 100MC. But, now I am back on it, I decided to sign up to another Saturn Running race, stay at a swanky hotel in Windsor and boom, the weekend that worked for me was this… the race is the Can’t Stop The Running weekend, second day, the theme, the Trolls movie. Now, I hadn’t heard of the Trolls movie, and so I looked it up on Wikipedia, and it here it is…

The film begins with the Potter family moving into a new apartment complex in San Francisco. While unpacking, their young daughter Wendy is attacked by a grotesque little creature, who had long ago been transformed from a powerful wizard into a troll. Using a magic crystal green ring, he captures Wendy and possesses her form. After meeting the other eccentric tenants, the family notices Wendy’s unusual behavior (roaring, biting, tossing people across rooms, punching people in the groin), but they attribute her behavior to the stress of the move. The only one that notices something is terribly wrong is Wendy’s brother, Harry Potter Jr.

Frightened by his sister’s sudden and violent changes, he seeks solace in the company of a mysterious old woman named Eunice St. Clair, who lives upstairs. When he tells her of the strange goings-on, she reveals to him her real profession: a witch. Harry asks Eunice to teach him magic, but she says that there isn’t time. She does instruct him as to the ways of a hidden magical world, and tells him of her long history stretching back to a time when she and a powerful wizard named Torok were in love. At that time the world was divided between fairies, which includes trolls, and humans. The realms were equal and independent of each other; however, Torok and some of the fairies challenged this balance resulting in a great war in which the humans prevailed. Torok was transformed into a troll as punishment. Eunice stands guard, as she has for centuries now in her apartment, waiting patiently for Torok to challenge the realms again, which is happening now. The troll wizard has already begun his secret war, going from apartment to apartment, attacking the tenants and transforming them into mythical creatures according to their personalities, such as goblins, nymphs, an elf, and a bugbear, and it transforms their rooms into lush fairy worlds. When every apartment is transformed the world of the fairies will burst forth into the world of the humans.

Harry is told by Eunice that Torok can be stopped by plunging a magic staff into the heart of Torok’s world. Eunice tells Harry the heart of the new fairy world will be a large and vicious magical creature. Armed with magic staffs which shoot bolts of energy, Eunice and Harry launch a final attempt to stop Torok’s hostile takeover of the world and enter the troll’s magical alternate universe. Eunice is attacked by Torok and turned into a tree stump, and Harry finds his sister trapped in a coffin of glass à la Snow White. Suddenly, Torok’s great bat monster attacks and disables Harry. When it goes after Wendy, Torok kills it, destroying his carefully constructed fairy realm. As the magic world collapses around them, Harry and his family are given a chance to escape, leaving just as the police arrive. Eunice is restored to normal as well as she bids Harry farewell and departs. As the police investigate the house, one of them is drawn into a remaining fragment of the alternate fairy world.

Torok’s arm rises into view, preparing to use his ring on the cop. The door closes while the film goes black. The credits roll.

I don’t know about you, but that doesn’t sound like the sort of thing a race should be based on. Sounds horrific. Like if McDonalds did martinis, or if they made a Brexit version of The Full Monty.

So What is it?

The idea is pretty simple. 6 hour time limit, 7 if there is enough demand, a single CP/HQ and a lorra lorra laps. I have raced marathons with 2 thirteen mile laps before. I was signed up for a track marathon, with 100 something 400 metre laps. This was a slightly more comfortable 3.28 miles or 5 and a bit KM laps. Basically my old analogy of a marathon from 3 years ago. That being that a marathon is just 8 parkruns and a walk to the pub afterwards.

The eight parkruns in this case being along the River Thames starting in Egham at the Wraysbury Skiff and Punting club, along the south bank of the Thames under a motorway bridge, past a sewerage treatment plant (poo-stinks) and then turning around and heading back again after hitting the bridge into Staines. 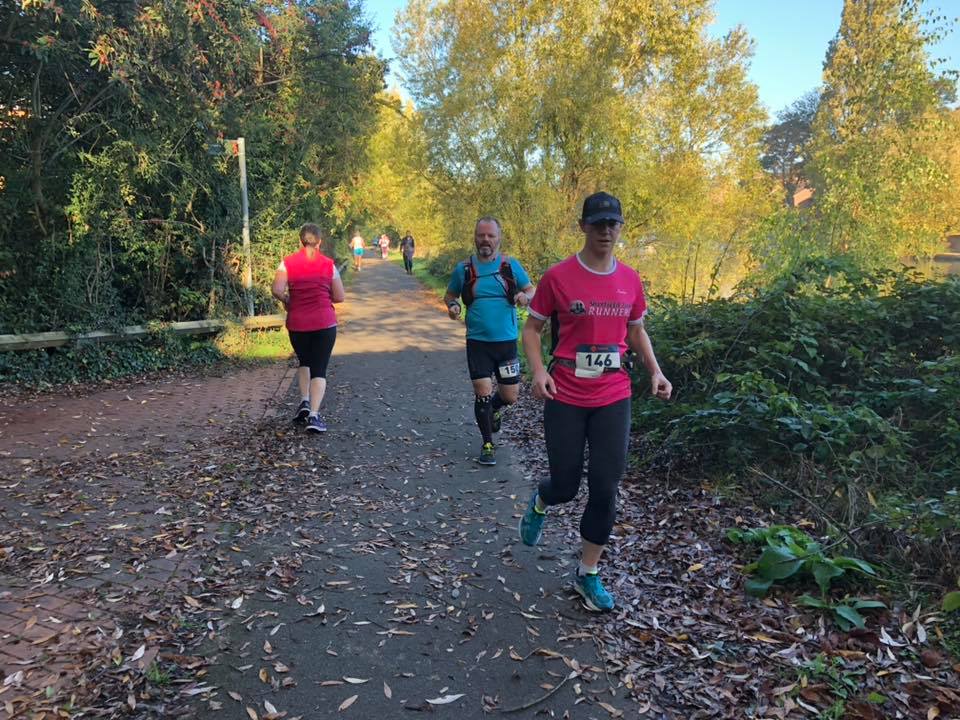 The benefit of a lap race, especially one with 8 laps and an easily accessible bag drop, is that you can adjust your kit accordingly. This worked for me back when I completed my first ever SVN marathon last January (the Cakeathon). You start with a hat, gloves, long sleeved top over short sleeved top, hydration vest to save you stopping all the time. But a couple of laps in and you are sweating like a monkey you can lose the hat, the gloves. If you are still stopping at the CP for drink, or it is rubbing, then lose the hydration vest. When the gloves get soggy, lose them too. And on the later laps, when slowing and the sun is going down, put it all back on again. Such is the pros of short laps and an easily accessible bag drop. 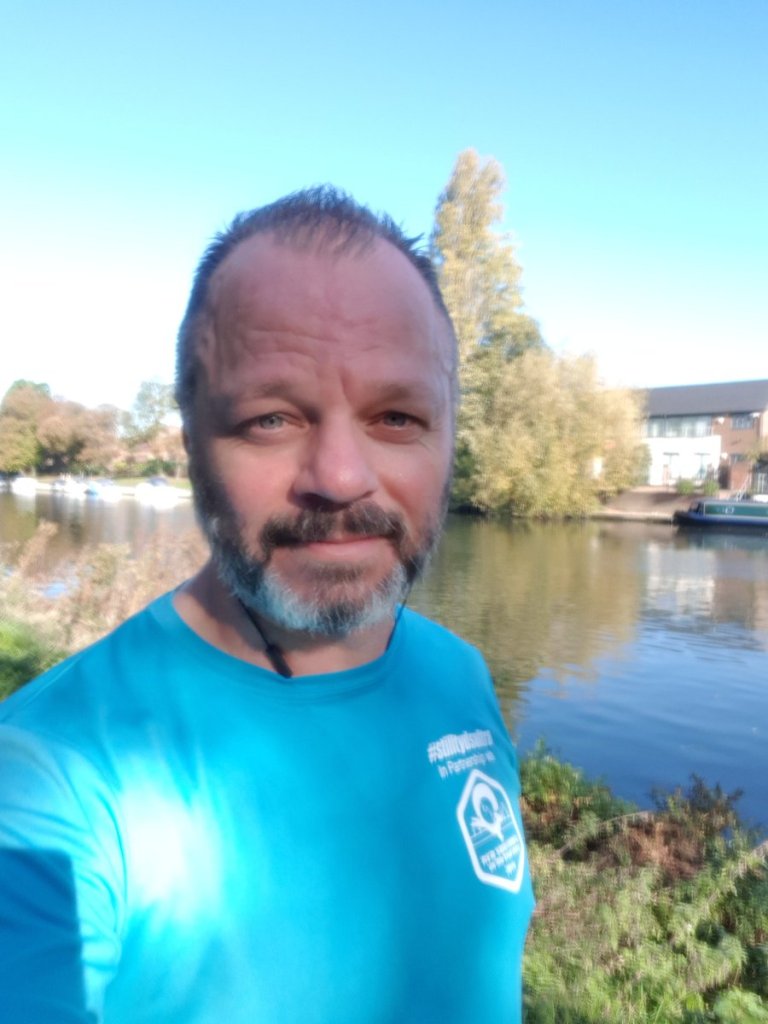 For Can’t Stop The Running II I started with my St Illtyds tee and hydration vest. The tee, with the motto “never underestimate the strength on an ultra runner” on the back, is a shot in the arm. You know you have gone that far before, and just need to dig deep to pull yourself through again. But after a couple of laps the tee was sandpapering my nipples off so I stopped at the bag drop, lost the vest, and changed to my Boba Fett top. Much kinder on the old nipplage. Yay for nipples!

It was a nice hot day. Other than that it was very similar to the Phoenix Winter Marathon in Walton on Thames. Almost identical. In fact a few of the regular faces from SVN and Phoenix were here too. There is clearly a family of runners who do these races. They love the laps and love the bling. And why not? The medals are as good, if not better than most road races, and with you getting bling for a single completed lap, it caters to anyone from a  slow walker to an ultra runner.

Again, and I think I have mentioned this a few times, you need some sort of strategy. You need to decide on when to stop for food and drink. If you are hungry, or you are thirsty, you have left it too late. You also do not want to waste a load of time at the CP when you could just head out and bash out another lap, knowing you need 4 for a half, 8 for a full, 9 and a bit for 50K and beyond. I decided to keep going as much as possible, now the safety of my nipples was secured. Nausea around the lap 5 mark changed that. I did pack SOS in my hydration vest and, as I started my 6th lap I was glad to sip that in a bottle to keep up the momentum.

It is, after all, if you get down to nuts and bolts, just one foot in front of the other. In my head I squared this kind of race off as being like a transatlantic flight a long time ago. On those flights you have 6-8 hours to kill and it doesn’t matter what you do, whether you listen to music, chat with the person next to you, drink, watch movies, sleep, time passes, and the distance is covered.  In these kind of races time will pass, and distance will be covered, whether you listen to music, or stop and chat at the CPs or with your fellow runners.  And with that, after 5 hours or so 100 Marathon Club number #30 was achieved with relative ease. I was not breaking any records. I was comfortable to run/walk for a chunk and run for others. It was great to see all same faces over and over and over again on the out and backs, as we were all in it together.

These races are all very friendly and interchangeable. For me it comes down to geography. If I want to run in Walton on Thames I will choose Pheonix, Egham Saturn and Kent SVN. I have finally run with the 3 biggest race companies of this ilk in my part of the world: Saxon Viking Norman, Phoenix and Saturn Running. And you see the same runners attending all three. Of the other two this felt more like a Phoenix running race. It was very reminiscent of the Phoenix Winter Run I used to complete my 12 in 12 last year up and down the Thames at Walton, a single tented HQ with sweets and drinks. At the Phoenix Groovy Run they counted your laps with hair bands around the wrist, and they did that here too. A tarp bag drop same as both SVN and Phoenix. The medals are great with all 3 but the SVN goodie bags are something else, and a step above the other two. So this race was an amalgam of the others. After it disappears into the haze of my memory I may well recollect parts of the others by mistake but I am glad I did it. 100 Marathon Club #30 done and dusted, and the Saturn Running bogeyman laid to rest after missing their two races in the summer when I had Whooping Cough.

Is… um… not what I was expecting.

The Scores on the Doors

Sometimes you need to do things for yourself. Sometimes you need closure. Sometimes you need to take a slightly easier option because you aren’t 100%. This race was all those things. I needed a mara after missing out on 6 this year due to sickness. I needed closure on Saturn Running, having missed 2 of their races during that period. And I am still not 100% health-wise, so a comfortable plod was ok for me. The Saturn Running races are very close to SVN and Phoenix, maybe a little closer to Phoenix what with the geography and format. They are friendly races with great bling and easy to process laps. I did enjoy it, as much as I do these races and I don’t intend to do anymore. It was what any of these races are – accessible and achievable. COMPETE. COMPLETE! BOSH! I am glad I did it. And proud of marathon #30 in 37 months. Can’t Stop The Running? Oh, like the song Can’t Stop the Feeling? Justin Timberlake? Ah. That Troll movie! That makes more sense.

And now I’m off to sleep this one off under a bridge.