There was a time when I used to run a lot of halves (7 in 2013, 11 in 2014) and some good ones too (Paris, Amsterdam, North Carolina around a NASCAR arena, Dublin, Disney Florida, Luxembourg, as well as Rock and Roll Dublin, Liverpool and the now defunct Edinburgh) but then they dropped off the radar when I stepped up to marathon distance in 2015. 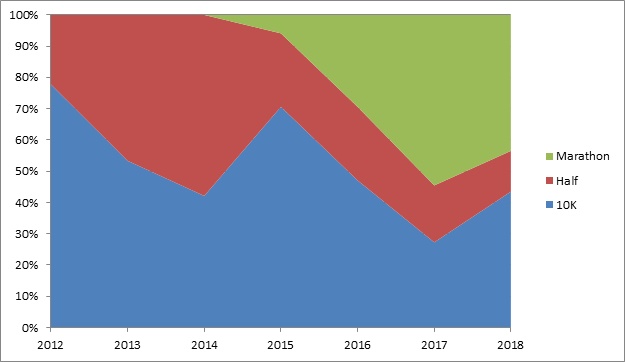 And I have only run ten in the following 3 years. The Garmin Race Your Pace half was my PB back in 2015. I was happy to break sub2 and comfortably on the flat loops of the Eton Dorney rowing lake. It was quickly replaced by Brighton half the following spring, a HUGE PB for me but then… as happens from time to time, and normally to other people, it turned out that the official measurers (made up word) had screwed up and the course was measured short. Brighton off the top spot and Garmin back as my PB.

The Royal Parks was my first half. Technically the second I had signed up for, as the Amsterdam half was the first race I ever entered, but it was the first one I ran, back in 2012 for MS Society. I was chubby, I was without beard, and I was much slower than I am now. Still, was happy with my time. Although after finishing and getting my wooden bling, I walked off the curb and twisted my knee, buggering it up for Amsterdam a fortnight later. Although didn’t stop me running it.

Back on it again, I ran 20 races in 6 months for Pancreatic Cancer UK. To help them out with a dropout, I took a charity spot from them to complete the 20. It is good to have a chosen charity, and you never know when they need you to fill a slot when there are inevitable dropouts so be ready to be parachuted in to help them out.  After this I ran Berlin Marathon and VLM for them, as well as my 12 marathons in 12 months last year so am very thankful.

It just happened. After being told of British 10K places up for grabs from a charity that did not fill it’s allocation I jumped in, paid more than they were asking, *this being my donation, and we were in. Same happened with the Royal Parks, an email saying we need more runners, sign up, pay more than the minimal entry fee so there is a donation too and boom!  After HOTH (24 miles), Loch Ness Mara and GMU (30 miles) I am excited about the prospect of not finishing broken.

Other than paying for my place through a charity I would not pay for this race. It is far too expensive. Up there with Brighton in it’s fleecing of the people. Up there with the Adidas 10Ks that roll around the £40 mark. The Royal Parks half is closer to £70. You are being ripped off. And this year the fleecing was doubled by the official merch being produced by renown yoga wear of the yummy mummies Lululemon. 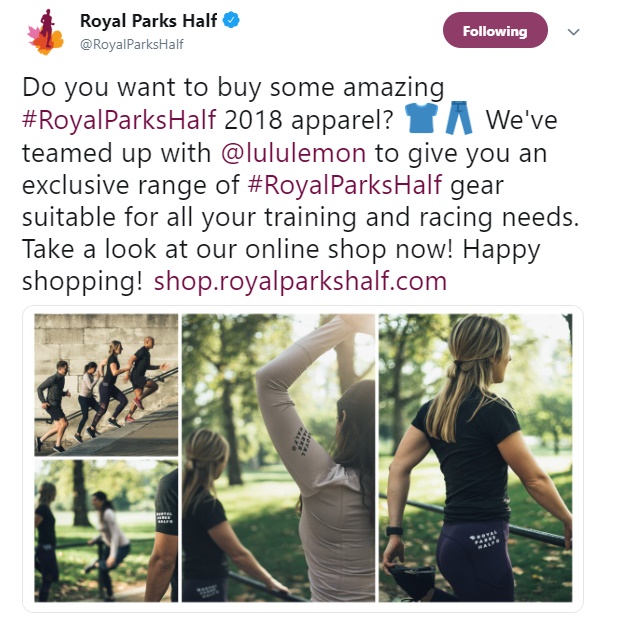 £90 for a pair of tights. Sell a kidney for the whole ensemble.

A Slight Change in Route

And it is the shitty change that the British 10K does too, sending you down the Strand rather than making the most of the views of Victoria Embankment. I much prefer the Embankment route as there is more to see, rather than being in the claustrophobic streets.

In the spiel they class it as “the world’s most stunning half” uh-uh. No, sir. Definitely not. What about Garda Trentino? 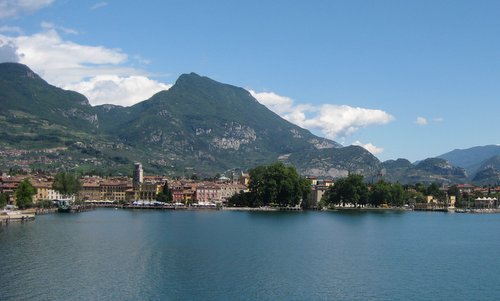 You do run by Buckingham Palace, under Admiralty Arch, a few there and backs, along the Mall, spend a lot of time in Hyde Park on there and backs until you are dizzy. But it isn’t all that beautiful. For the same or less cost you could run the British 10K and the Runthrough Hyde Park 10K for the same experience.

It started shit. The day that is. With quite a few people I knew turning up to this one, as opposed to Manchester Half and the Great Eastern Run in Timewarp Town (Peterborough), a town so out of step with time Sapphire and Steel run the local bookies, there would be meetups all over the place starting with Jen Morris at Hyde Park Corner. 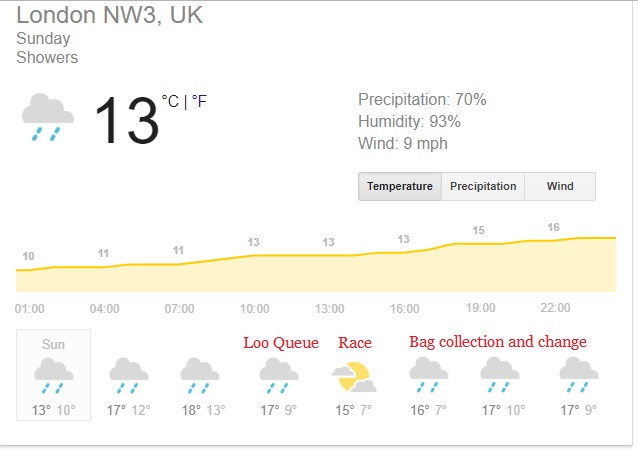 We met up and headed across Hyde Park toward the “race village”. Although it was less of a village. There was no tent to change in. They had charity tents. A VIP tent. An info tent. A merchandise tent where you could buy £98 Lululemon leggings and £8 million Lululemon lime green faux mink lined Decaf Soy Frappe drinking gloves to match the yummy mummy’s Range Rover interior. But no changing tent despite the torrential rain being forecast days before. There were plenty of toilets, a nice large row of them near the coloured starts, and a small row way before the village, that we started queuing for.

We queued. We are British after all. We don’t mind queuing. The world’s leading expert on queues Richard Larson notes:

“Often the psychology of queuing is more important than the statistics of the wait itself.”

But what I discovered early on in our toilet queue experience, is that some people are asshats. The queue queued west to east. Patient runners stood in line as the rains started to fall. Heavy rain too. The tree canopy was not helping so I was glad that Jenni was a former Girl Guide and fully prepared with not 1 but 2 rain ponchos. Well played. Runners are patient. Charity runners, for whom this race may well be their first or only race, forwent all etiquette and started a second queue going east to west, from the other side and taking half the portaloos as theirs. A gaggle of northern lady footballers all raising for a charity, and all wearing a lot of very nice makeup (making me feel decidedly under dressed) decided to join the shorter “new” queue making ours go down. My, how we laughed. They joined the other queue to save time. Ours moved forward. But then ours stopped. And the rains continued. After about a quarter of an hour, during which Jen waxed rhapsodic about the fast moving and well marshaled polite queue at Loch Ness, and I cursed the lack of a marshal keeping the queue jumpers in check, we said screw it and headed into the race village hearing the start of the race. We were late. 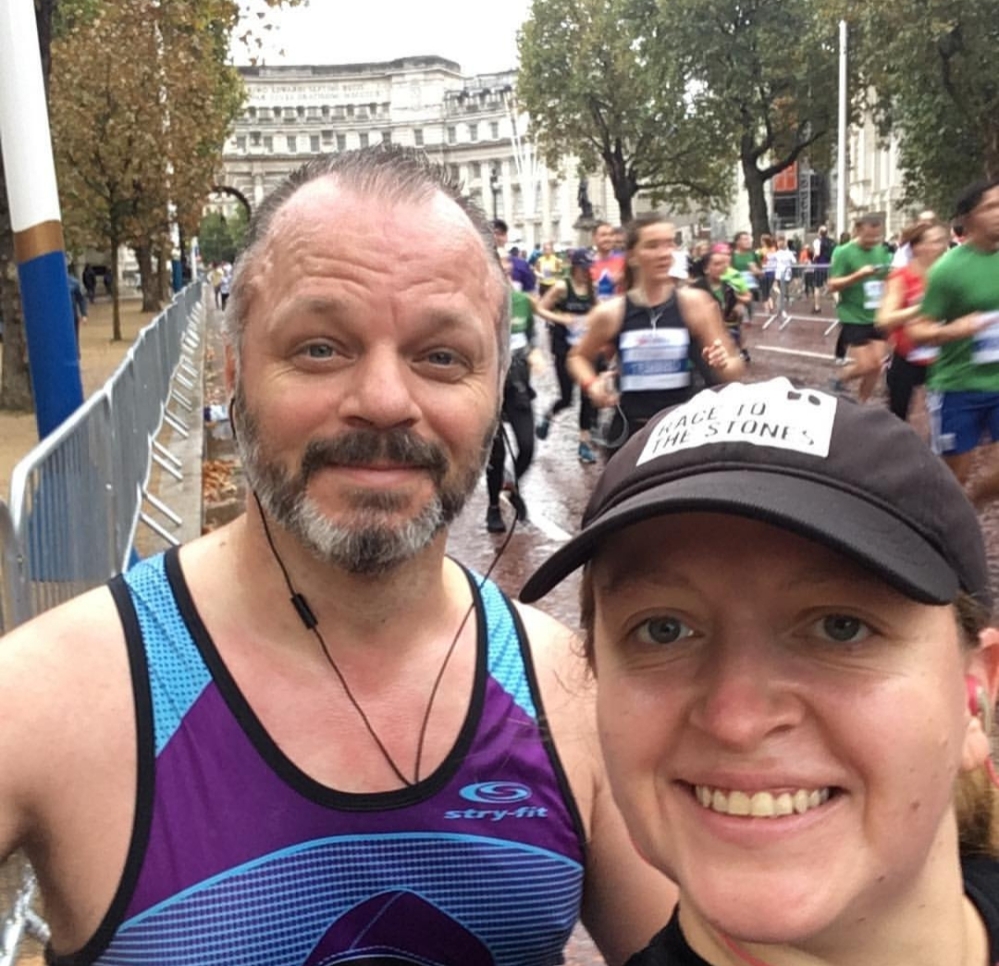 We were so late. And then we had to trudge the entire length of the race village to the bag drop and join queues that were about a hundred yards long that then joined a zigzag before finally getting to where you needed to be. It was in this queue that we heard the countdown, 3-2-1-go! and the second wave starting. Ours was the second wave. 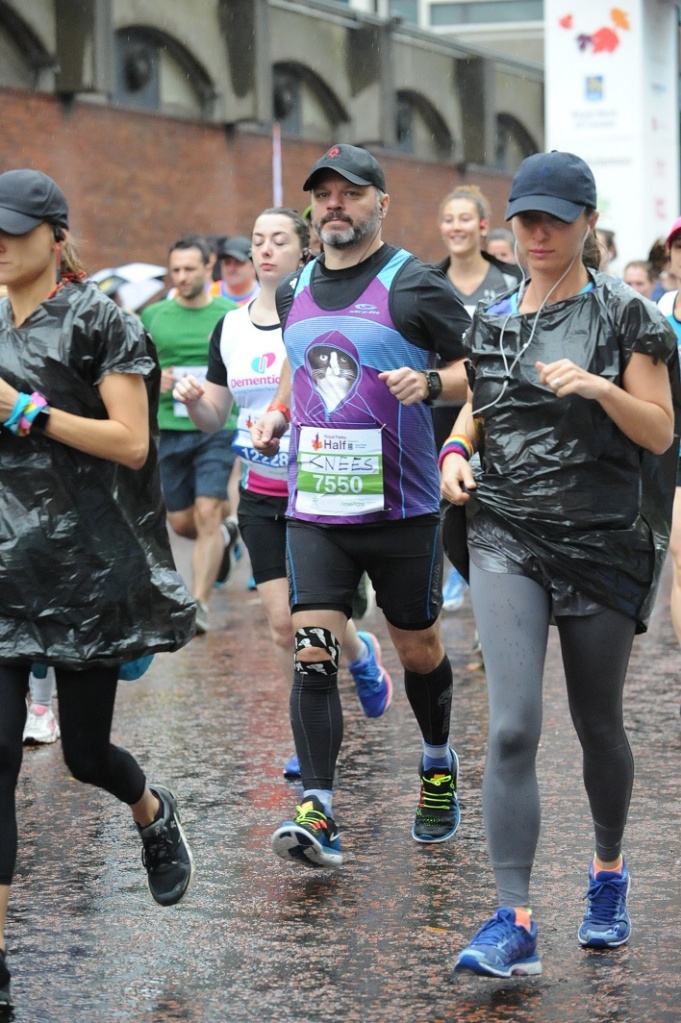 We met up with a rather red looking Dan Fossey, his hair and beard dye for his charity now making him look, for all intent and purposes, like Carrie. And then queued for the toilets that, now that most people were either a) in their pens or b) had started already and were half way around the course, were pretty short.

The rain had stopped and an oppressive humidity replaced it. I was chilled from the rain and so, instead of throwing away the Descente tee from Richmond, I stripped off and put it underneath my vest. I was wearing the club vest gifted me by Canadian friend Alana, new Ratrace calf sleeves and my trusted OMM shorts and Red Squirrel cap. I would say I started in them but, within a mile, I had stripped off again, binned the tee, pulled down the calf sleeves and chucked the cap (sorry Chris). 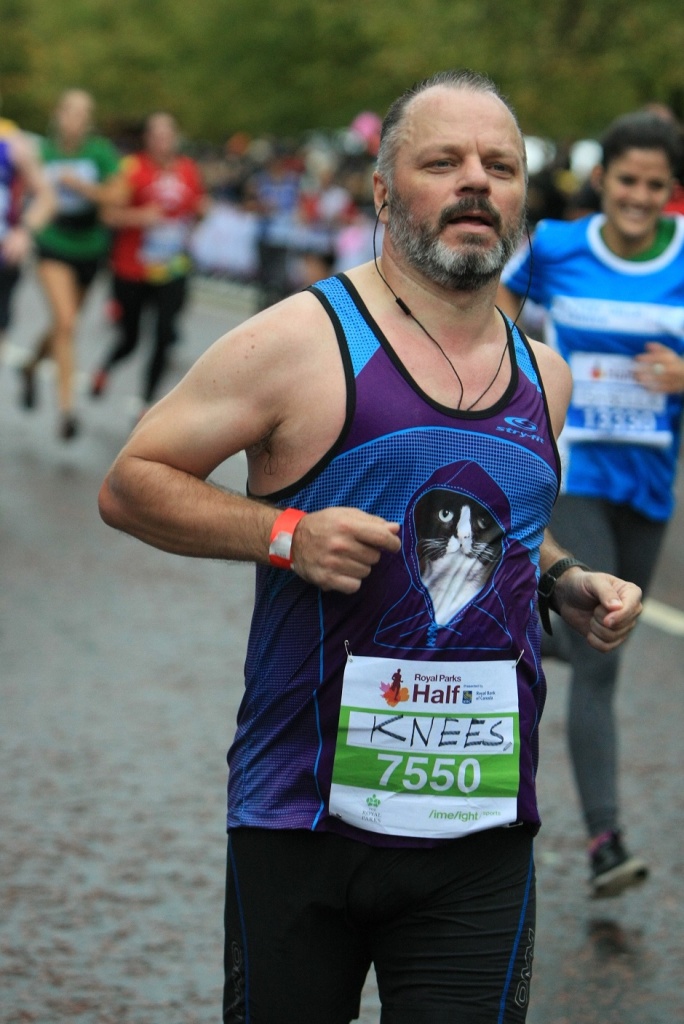 And the race was ok. Jen and I joined the end of the wave. I raced off as per, and then somehow, as I slowed after Admiralty Arch for a bit of a walk, someone stopped in front of me to take photos of the Mall and Buck House. And, of all the damned 15,000 runners, it was Jen! We then had a bit of a run together up past Buckingham Palace and to Hyde Park Corner, before entering Hyde Park, where I then shot off.

I just wanted a normal pace bimble and that is what I got. Same speed as my last half. Same time as the last time I raced here. But with a marathon the following Sunday and brand new shoes, I was happy to plod about at a consistent pace, even if we were plodding along the Strand and not on the Embankment.

We did see young Dan again. And it was good to once again put a face to a name. Or a name to a face. Whatever way around you prefer. Although he did look horrific. I am surprised an ambulanceman or copper didn’t see if he was alright. 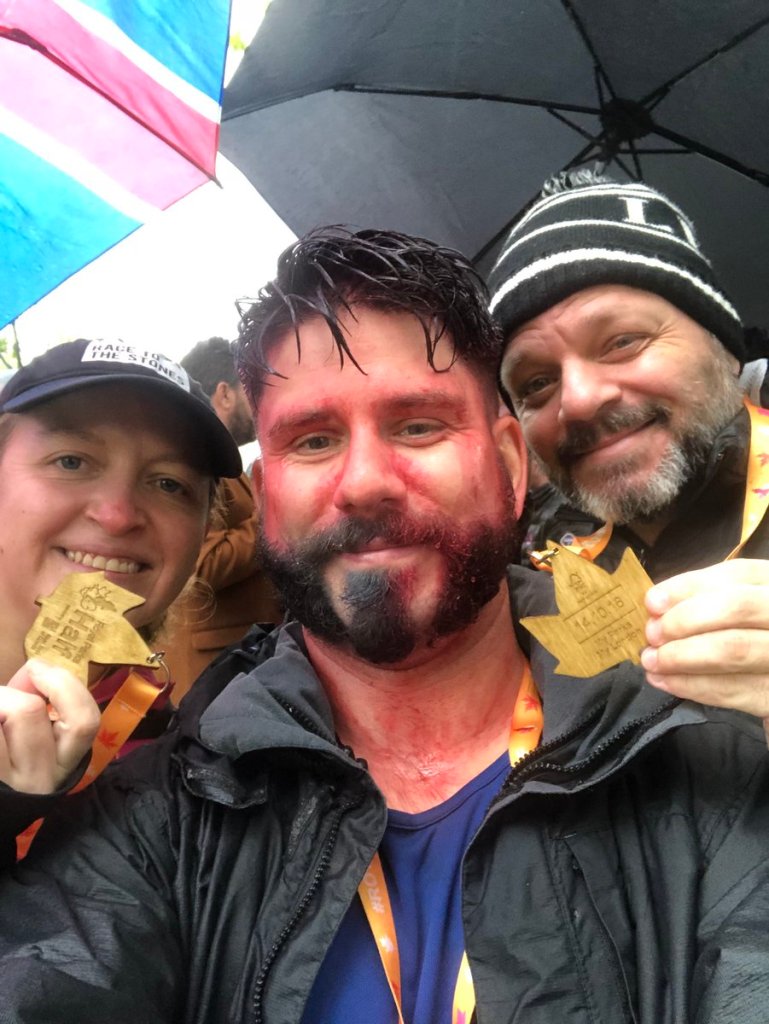 I did notice that, after I ran this last time that the medal had stayed the same for the next couple of years. In 2014 it was an oak. In 2012, it reminded me of this joke. 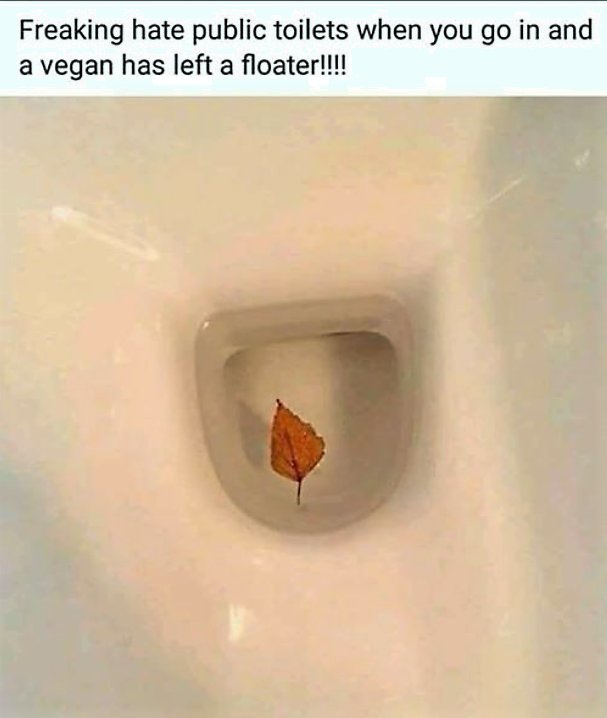 And in the end it was a repeat medal, albeit made from a different wood, or the same wood but varnished.

There was a fabric bag they gave, a banana, a can of Tenzing and a carton of water. Apparently there was a huge amount of swag but who knew? Who knew? Well, Jo did as she filled her fabric bag like it was Santa’s sack. This was the 3rd time of running, and for a race so expensive it should probably be a bit better organised.

I know Jo liked it. Dan seemed to. Jen wasn’t a fan of the lack of organisation for the sheer cost. But for me there was too much wrong with the day. It all seemed rushed, and wet, and cold, or humid and hot and sticky, and after, as we ensconced ourselves in the Hard Rock Cafe, I felt really sick and cold. I was fine after eating, and it was probably low blood sugar because I hadn’t eaten all day, or low salt, because I sweated a lot, or I am just old and out of shape. I was quite disappointed to see Lululemon provided the merch as it meant it was astronomical in price. I was more disappointed, when we finished and the heavens opened, that there was genuinely no tent to change in. You could buy £98 leggings with the race logo on them, but you couldn’t change into them as you were being soaked to the bone. As it was, when we got to the bag tent, the sheer volume of water pouring off the roof meant grabbing your bag was more like reaching into a waterfall. 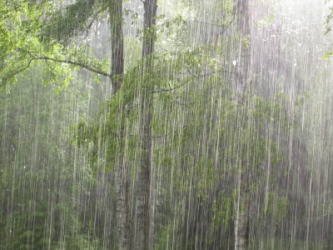 But meh! It is what it is. Or it was what it was. We ran it. It was good training. I wouldn’t seek to do it again. I didn’t plan on doing it any of the times I did it.  But if the weather is good then I would recommend it. 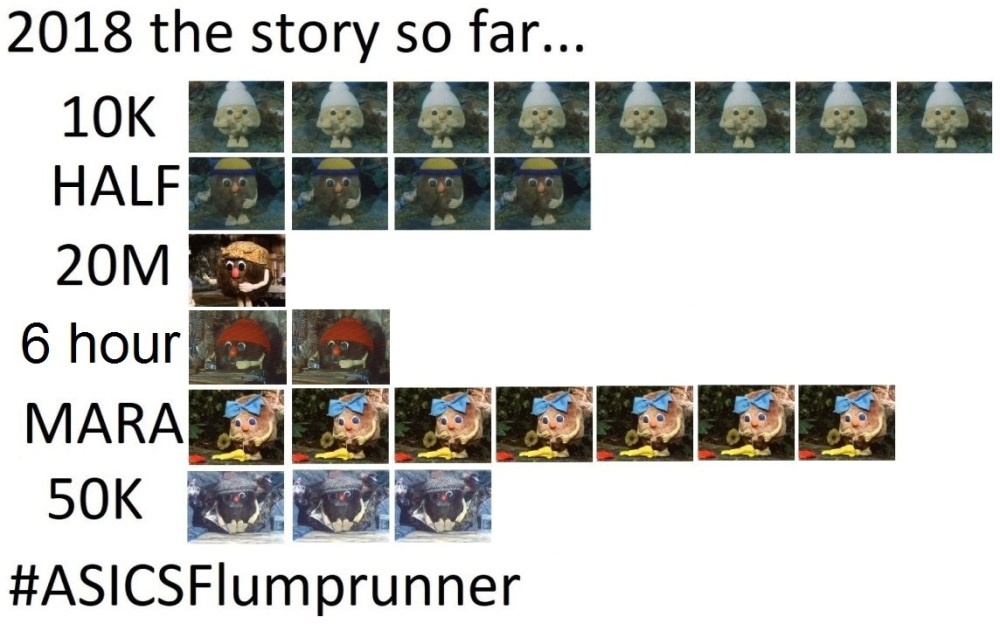 NEXT UP: SATURN RUNNING