Back in the mists of time I bailed on a race here. It was the Fix Events Richmond Park 10K on the 1st of February 2013, my second year of running. I was having a post flu, midst of divorce terrible time of it and bailed a dozen races that year including the aforementioned 10. But, if you know me, you will know I am one for closure and have since ticked off many of the races I bailed that year including:

I have, being me, since run Bacchus (twice!), Berlin marathon, and Luxembourg Night Marathon hence the strike-through and this race will allow me to tick off the Richmond 10K that was part of my period of running shame.

Our way was blocked by people on bicycles, and people running. A duathlon was underway. And it is that duathlon, or the running part of it, that I will be running this Sunday, post injury, post whooping cough, pre Loch Ness mara and pre GMU.

When you signed up you could ask for the tee to be sent to your home along with the bib, or pick it up at the store on Carnaby St. A sports store with £150 hoodies. You know the type. You walk in and there is a rack of a dozen identical black tops uplight, exposed brickwork, cubes to sit on, ambient music and three sales assistants ignoring your very existence as you are not cool enough to be there, and are probably lost, so will go away and not bother them if they ignore you long enough.

This is part of the London Duathlon sponsored by Descente, a Japanese clothing firm that has been around for 80 years. The tee shirt is pretty nice to be fair, nice material and, if you wear it on race day, you get to enter the start funnel ahead of the others. It is basically akin to priority boarding on Sleazy Jet if you wear a t-shirt emblazoned with the airline logo. Not that it will make you run any faster. I will wear mine anyway. 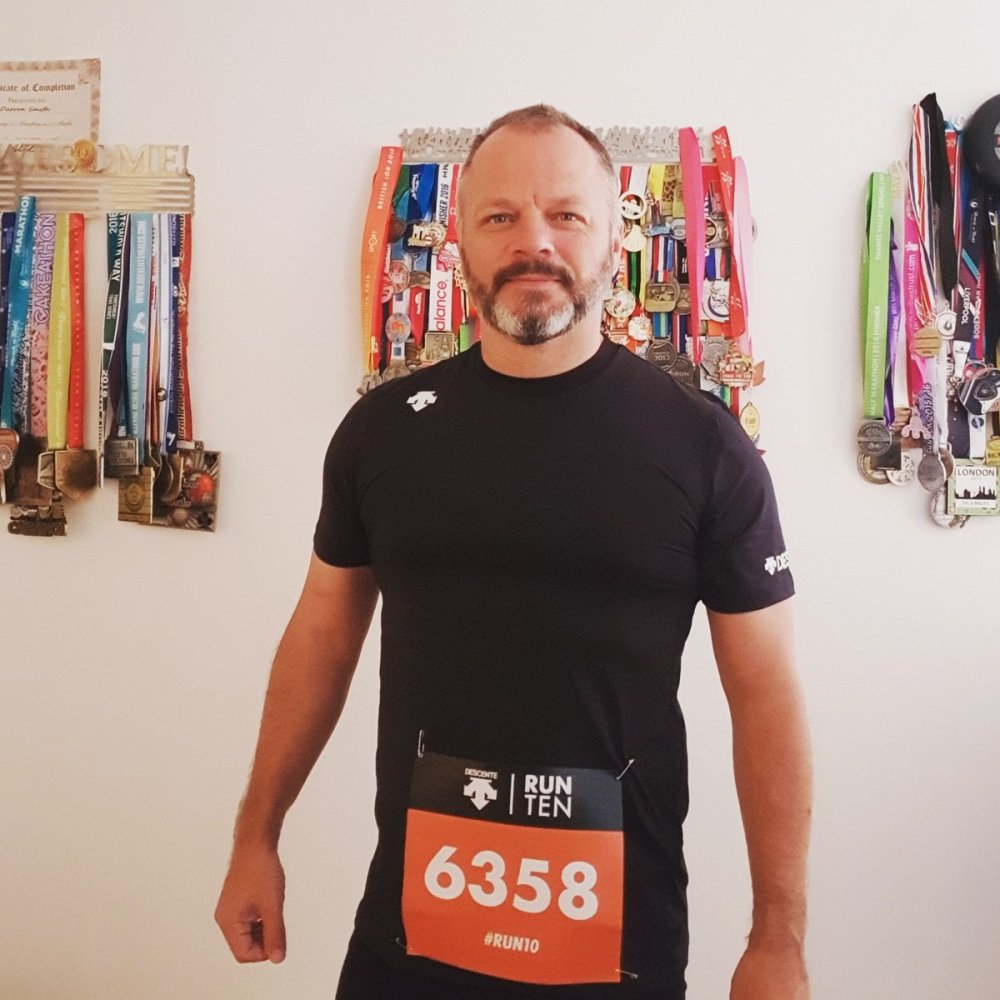 On the day that my peeps ran Reigate half, EHM, and the Berlin marathon Mr and Mrs 100 Marathon Challenge, Jenni Morris and I found ourselves crossing over the bike route with duathloners and runners alike, all resplendent in our Descente kit at the Barnes end of Richmond Park. Coincidentally the Richmond Running Festival was also going on and the Richmond 10K, Half and Marathon would also be going on somewhere. It meant for a busy train from Waterloo (as TFL had fucked up the tubes as per usual) with two sets of runners going to roughly the same location on the same train. It did mean that, when the duathlon and Run10 runners got off at Barnes several of the RRF runners did too, following the crowd, and realising they needed to get back on the train.

Much like 2 years ago barriers were up along the route, and a bridge led us across from the cafes and park toilets to the race HQ, start/finish and race village where several tents were set up for Descente goods but also bike wanker stuff, and anything needed for the special breed of duathloners. And really this was a running race set in the larger dual discipline event. Bikes were everywhere. The starts were staggered. The tannoy discussed transition areas and the like. And it all seemed far more organised, yet complex, and regimented than your typical running race. And this made sense. You can’t just have hundreds of cyclists going off at once. You need to stagger them. And so, we found ourselves heading to the start pen in batches (yes, runners come in batches) of about 30.

The route, as we were told by a marshal in a small tent, before a recorded safety message pointed out that we should not drop litter, and that it was a DQ offence, as was hassling the deer, as was not adhering to the marshals,  was one single 10K loop of the undulating park. Simples.

Okay. Let’t start at the beginning.  No music. But one in 10 maybe had headphones on.  Descente tee getting you priority access to the start pens? Bullshit. Rules broken. We were herded into start pens of about 30 a go. In turn a marshal led a group to a tent where a recorded safety announcement was played. It lasted a minute and then… we were off.

I have barely ran. I missed Parkrun yesterday as HH was cancelled and I felt like shredded arse. I am trying to find the NEW SHOE and was trying the Nike Lunarglides for their first outing. I should probably have started slow, as we started on a few hundred yards of grass before hitting the path, but I didn’t. I was off to a flyer. A couple of sub 8 minute miles (not fast by any means, but certainly when recovering from whooping cough and drowning in mucus) and I spotted the first herd of deer. FENTON!!!!!!!!!!!!!!!!!!

I dropped after 4KM to a simple 20 count walk then run to the KM buzz on the Garmin strategy. I was in no shape to run the whole way and needed to take on water. The tee was great, non-chafe, wicking, but it was thick and black, and I was sweating like a monkey. And I was glad of a bottle of water at 3.3KM to swig before speeding up. 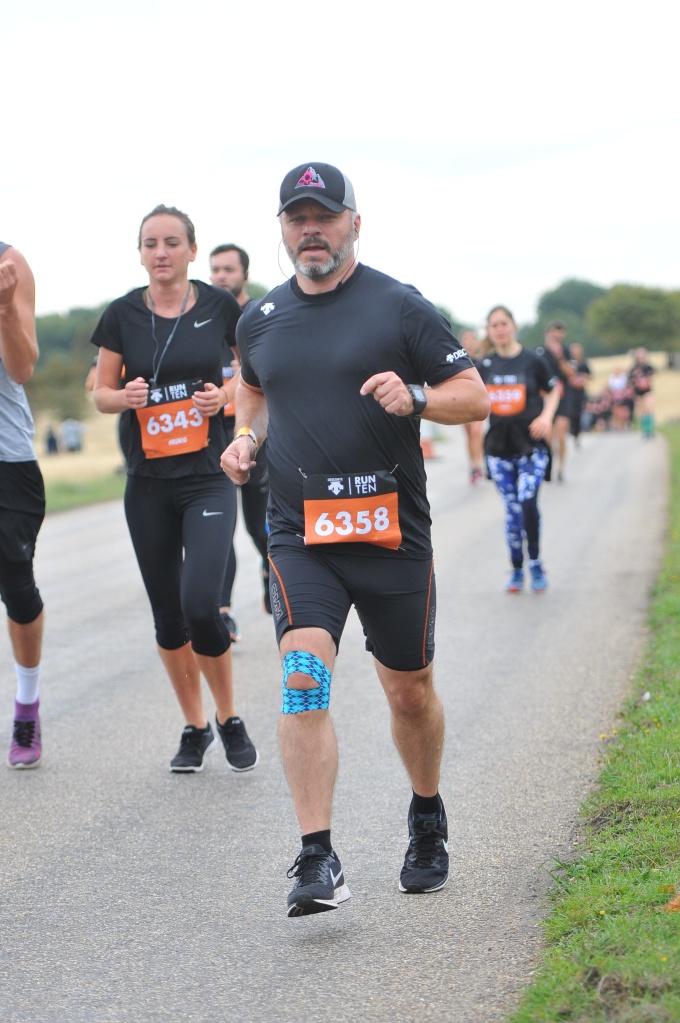 My aim, as the KMs ticked over, was a simple sub hour. Again, not fast, not even for the likes of this fat Hobbit, but I am so far out of condition I have been thinking of going back to basics. At the 6KM marker I checked my watch. It was way off. The marker that is. We were only 5.7K into the race. That did not bode well. 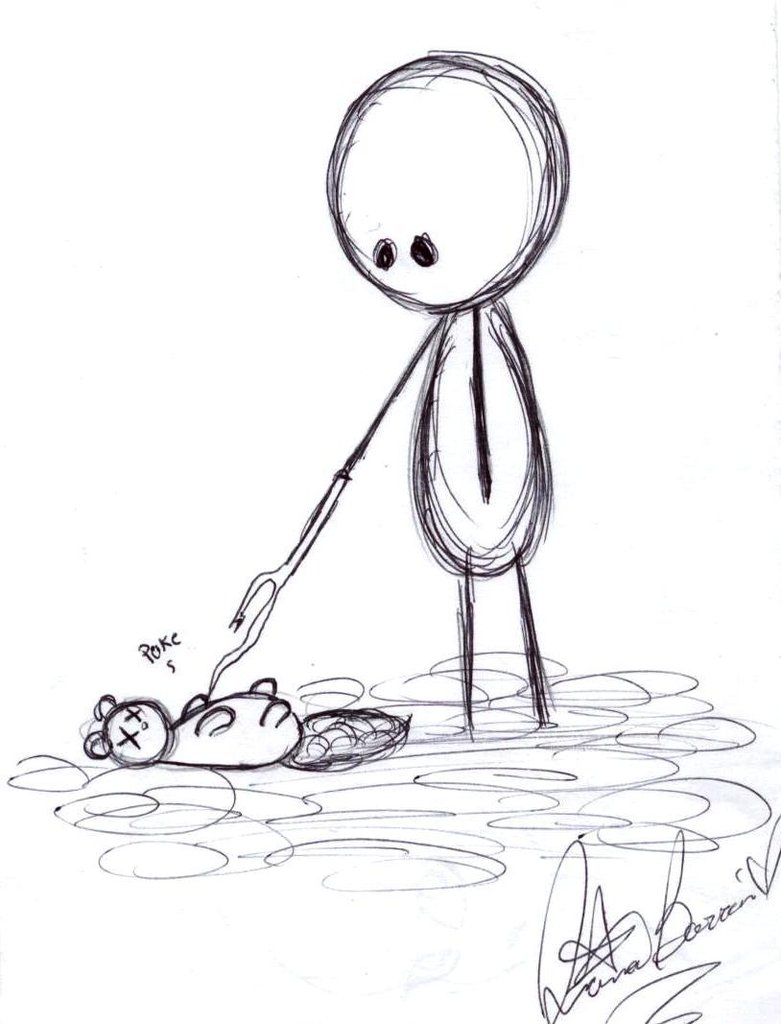 Dead squirrel to the left, and then more deer. FENTONNNNN!!!!!! 4 this time, 3 mature females and a fawn. They watched us with caution and then started edging our way. Cautious not to spook them, or upset them in any way, I took a wide arc away from them before making full eye contact with the largest deer, and having it start trotting after us. I was a bit concerned. I know what they can be like.

The paths we ran on were either separated down the middle by cones or barriers, with the occasional sign saying STAY LEFT, CYCLISTS IN OTHER LANE, or were completely open to us. It did mean we were bunched in a little, but with the staggered start, it did mean the paths never really got all that busy, not even at a U turn, or either of the remaining water stops.

And soon, I ticked off the 7KM marker, that seemed to be in the right place, before discovering the 8KM was way off, by roughly the same distance as the 6KM (so about 280M). It did seem odd as I played my run/walk game and realised the left shoe had a hot spot under the ball of the foot, and was making my ankle turn outwards as I landed. Neither of these factors were good, and those shoes will be shelved for the next race.

Then, in the middle distance, I saw the bridge into the race village. I was on the home straight. I was hot, sweaty, and way off my best, but, as I hit the last left turn onto the grass and through the FINISH arch, I was happy and glad I made most of it, with only one coughing fit of note. Almost an hour dead. And an updated map for you.

It is small and unique. The tee was good too.

I have never raced Richmond Park before and it is a hilly one. The hills are long slow burns and you do feel them. The downs are good and the paths are well maintained. It feels very different to the London parks I ordinarily run as this is more wild, with wooded areas, and the deer. FENTONNNNNN!!!!! And the deer are everywhere. As I said earlier this was part of a bigger event and the organisation needed for a duathlon is much more than a simple footrace, but they did it well. The herding of us into small groups into a tent for a recorded safety talk, before a staggered start after the 4th beep was good and needed when there are such narrow paths. I did like the tee, and whole atmosphere. It was very well organised. I am happy with an hour dead, despite walking for a good 2K of it. That would add 8 minutes to my time. If I ran the whole thing, if my lungs had cooperated, then I would be closer to my normal 50.

NEXT UP: LOCH NESS MARATHON