It is a phrase that is used too often. Well, that escalated quickly. I use the meme quite a bit in a jovial manner when a group of us have been talking and we go from mentioning a race, to all signing up, booking accommodation and planning the after party at a pub-like venue where we have already booked a snug. And is pretty much how this came about. I decided against Greenpoint Parkrun, instead opting for an extra 3 hours of sleep. I am on holiday after all. That, and Parkrun in SA starts at 8am and not the traditional 9. In the day I was then asked if I wanted to hike up the mountain, and I said sure. “Hike.” That was the word I heard and it was what I expected. A hike.

According to the OED the definition of a hike – a long walk or walking tour. And that is what I had in my mind. I would hike up Table Mountain, and it would replace Greenpoint Parkrun as my second run of my trip. I asked the time it would take and was told roughly an hour and three quarters. Awesome, I thought, that would be in the 15K range and I can add those miles to my 100 Miles in September Challenge. But reality and expectation are not always aligned. You know the Expectation vs Reality series of memes? Well, it is that.

As we drove to the foot of Table Mountain I chatted cheerily about Ultraks and it’s ascents, and hiking poles and my running/hiking/climbing buddy smiled knowingly and nodded, mentioning wingriders jumping from the top and how he has been injured (broken foot) and hasn’t gone up the mountain for a few months. We parked up by the cable car station and walked by a group at a sign at the bottom of what is known as the 1000 Steps. It is “the warm up” I was told, a thigh and lung burning route up stepped rocks of differing sizes, flatness, and angles, that took us up to the horizontal pathway that runs around the mountain.

And this was, as I look back, the most physically tiring, and painful on the old feet, section of the route. The rest would be a challenge, but this was the Vertical Rush, or the 5 Peaks, or sections of Ultraks. I have done this kinda thing before, and all it did was hurt my trotters, and reiterate to me just how out of condition I am after 10 weeks off after Tower.

The trail we would be taking was the India Venster and details can be found here. It is, apparently, and only discovered now or, rather, then, is “the most direct route to the three main rock climbing “crags” on Table Mountain.” Three! Rock! Climbing! Crags! If I had read that before, I would not have gone. And I would have missed out. The article goes on to add that the India Venster is on the “must do list” of many ordinary people who are physically ill prepared and poorly equipped for such an undertaking and who willingly or unwillingly fail to appreciate its inherent dangers. And you cannot get more ordinary, physically ill prepared or poorly equipped as me for this adventure.

Venster is Afrikaans for window and it is a, well, window created by a couple of boulders falling off the mountain and getting wedged that allows you to see out. It is quite fun and a must have photo. You have earned it after all at this point, hiking up a trail that did include clambering over some rocks. But from here hiking and clambering is replaced by scrambling, climbing and rock hopping.

Now scrambling I can handle. In my head this is akin to getting up the stairs on all fours when drunk. We have all done that from time to time. Rock hopping made me think of the outdoor brand Craghoppers and picture myself watching as my guide hopped effortlessly from one boulder to another before calling for me to join him, and me falling down the first crevice. 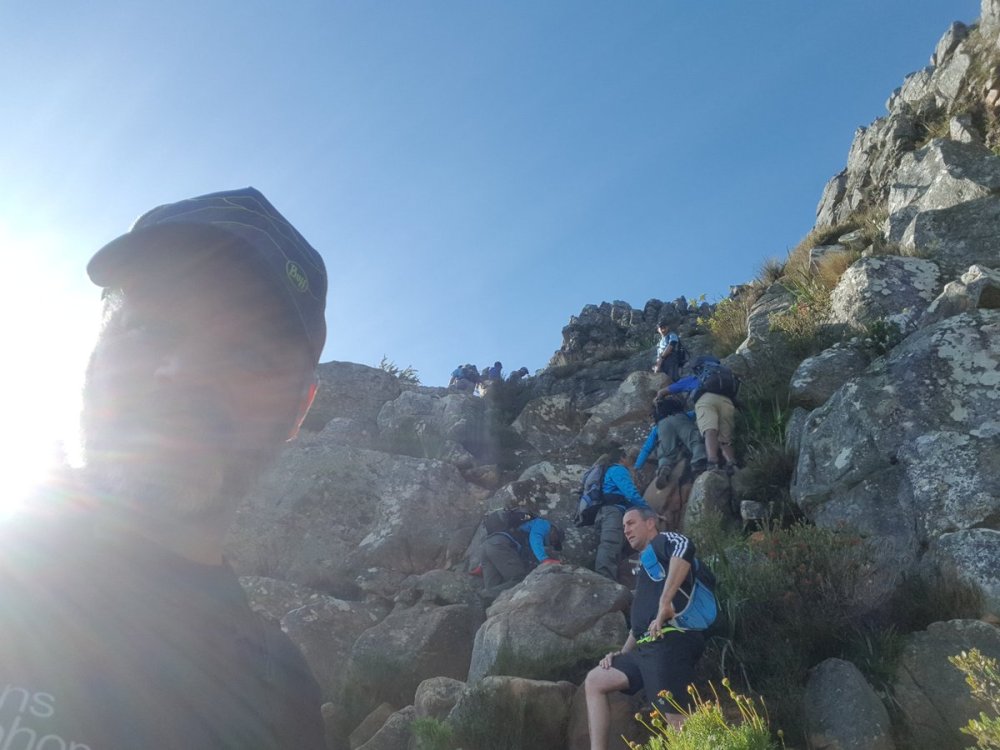 But as we reached the top of the scrambling section and reached what Craig described as a trail and I describe as probably the first thing I had seen for an hour that resembled a path we caught up with a group of National Park service guides and rangers walking and climbing the route as part of their training. It was here that I noticed we were going directly up. I asked if this was where the climbing section started and was told, this is still scrambling, we are just scrambling directly upwards.

The rangers were of mixed ability and it was obvious by our attire more than anything that we looked to race up the mountain. They kindly offered to let us pass on the climb, and I kindly turned it down, letting them all up the buttress (a new word in my vocabulary)  before we ascended. And I did okay. I didn’t need any guidance and whizzed up to join Craig and the rangers, adding a cheery and comical “so where’s the coffee?” to lighten the mood.

Chains and staples were embedded in rocks, and I was being told left hand there, right foot there, as if in a potentially fatal game of horizontal Twister.  A boulder could be 6 or 5 foot high, a staple would get you to the top of it but then, standing on a ledge another staple would get me to another staple to the top of a 6 foot boulder that had a chain in the top. And I would pull myself up with that, not thinking about the 11 foot drop to the ledge below. 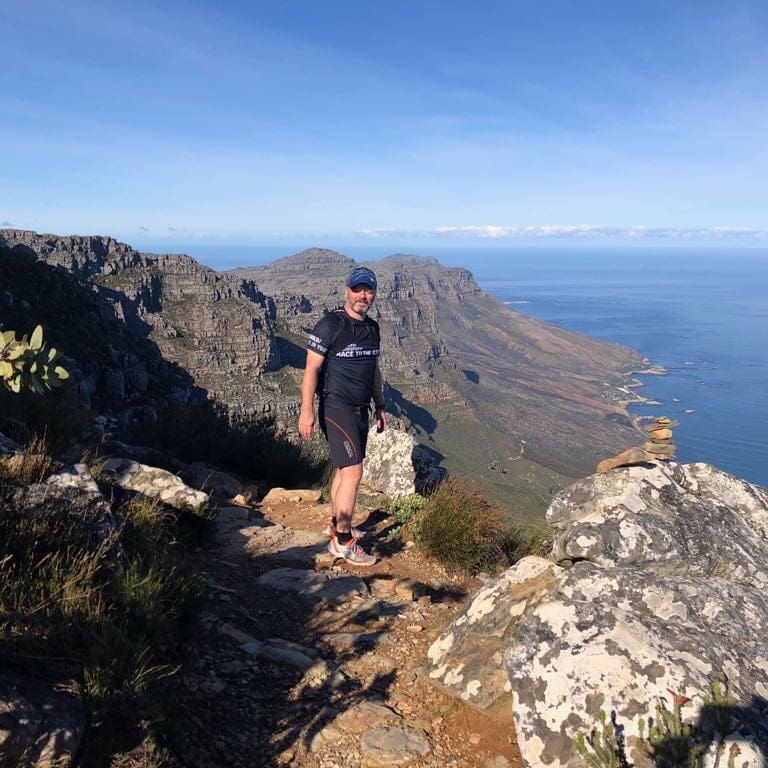 There would be half a dozen of the staple and chain tortures that I needed to endure and at the completion of each hair raising test Craig would say, this is the last bit of climb, from here it is just trail. Craig, however, was lying. Still I did endure them all, and when we finally met up with a group of 3 guys, one of them somehow stuck with his back to the rock, facing out, I felt a little bashed up, a little scraped up but proud that I had done the hard part, and was now up and under the final stretch, the dark side of the mountain and then the walk to the top and a well earned coffee and cinnamon bun. 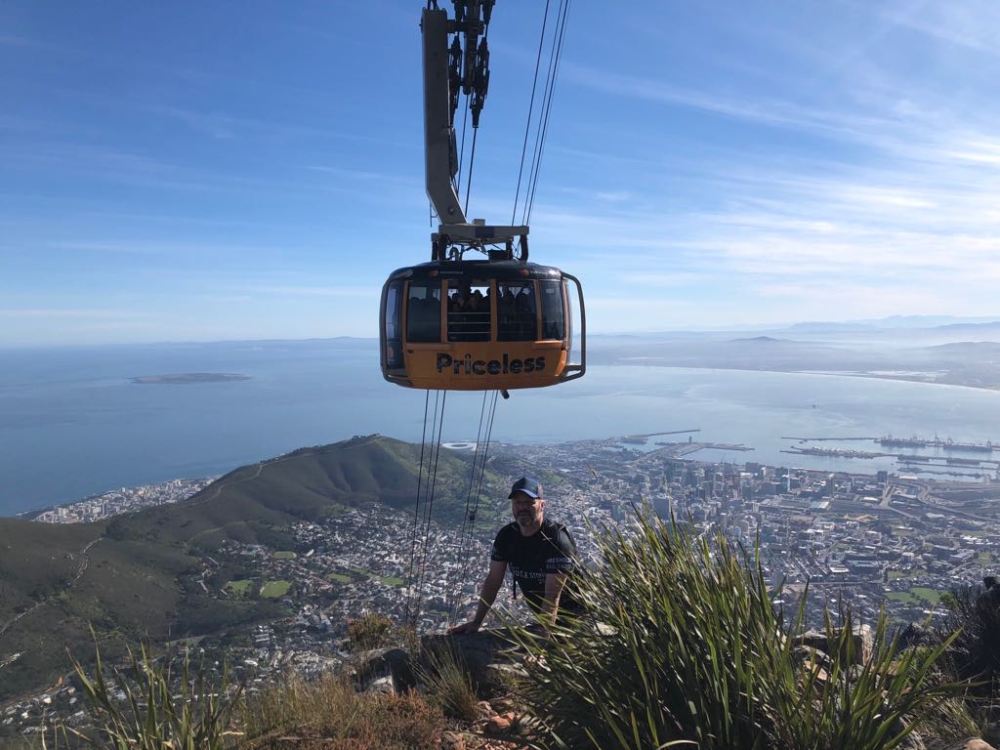 The dark side of the mountain is weird. It is cold. It is wet. It is slippery, and from it you look out at Lion’s Head. But it is relatively flat. And I could finally calm down. No more climbing. Watch stopped. We had travelled 2.33KM in 2 hours. We had climbed, scrambled, and hiked 2000 feet up and now the big decision. Do we go back down another route, one that does not involve climbing or…

Or just have a coffee and a cake and then get the cable car down. And yes, that did sound like the more attractive option to me too.

What did I learn?

That you can face your fears and defeat them, potentially in the short term, or in the moment, but maybe forever. You just need to test yourself. You can achieve the most incredible and impossible things. You just need to believe. And to get up a mountain when you are petrified of heights just don’t look down.

Oh, and the Polar M430 cannot handle climbing. Look at the dog’s breakfast!

Oddly though my legs felt fine after. I could have gone for a run. But instead I saved that for the next day,  for a run along the waterfront in the sun where the only elevation was up and down the curb.