I have been here before, listing the Man v Horse, Beat the Boat, Chase the Train, all those wonderful niche races where you forget your fellow runners and throw yourself headfirst down a hill in the pursuit of a truckle of cheese. I have run the Beat the Boat, almost exactly a year ago with post Comrades injuries, with Lewis Clarke. I have not chased a train, or a horse, but there is another challenge out there.

I was kinda late to the party. Ware has a pretty popular festival of running. It is a 10K and a 10 miler on the same day, much like the Gutbuster I ran a few Decembers back known as the Ware 10s. The locals (JK, Rob O’Hara, Essex Baz and Lewis) signed up. It would be a summer’s day drink fest in the beer garden of a  local hostelry. With alcohol mentioned the London crew started sniffing around and soon Baz and Kaya were also signed up.

Keen to get in on the action I also signed up. It was supposed to be a busy period for me, with 5 marathons in 6 weeks, but I got broken at Tower and cancelled ALL of them. With no running at all for 4 weeks I picked the 10K, not knowing that everyone else had signed up for the 10Miler. Balls. Sometimes I can be a bit of a twat, but we are not the type of people to dwell on a mistake, you can’t put the shit back in the donkey, after all, not when we all get to run together anyway. And so a thought started as a seed and then to grow in my head, grow and grow, shapes and words forming before it burst!

The concept had come to me, a spark! A brilliant beam of light descending from the heavens into by skull! Eureka!

And thus a new event was created 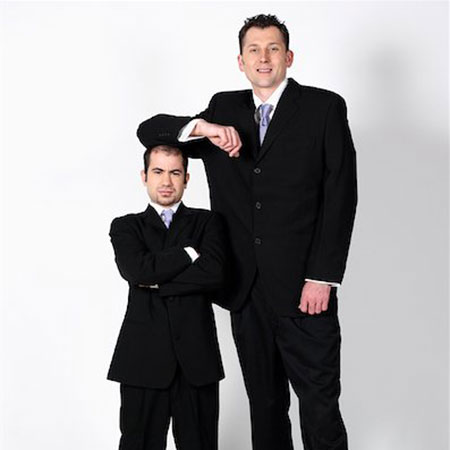 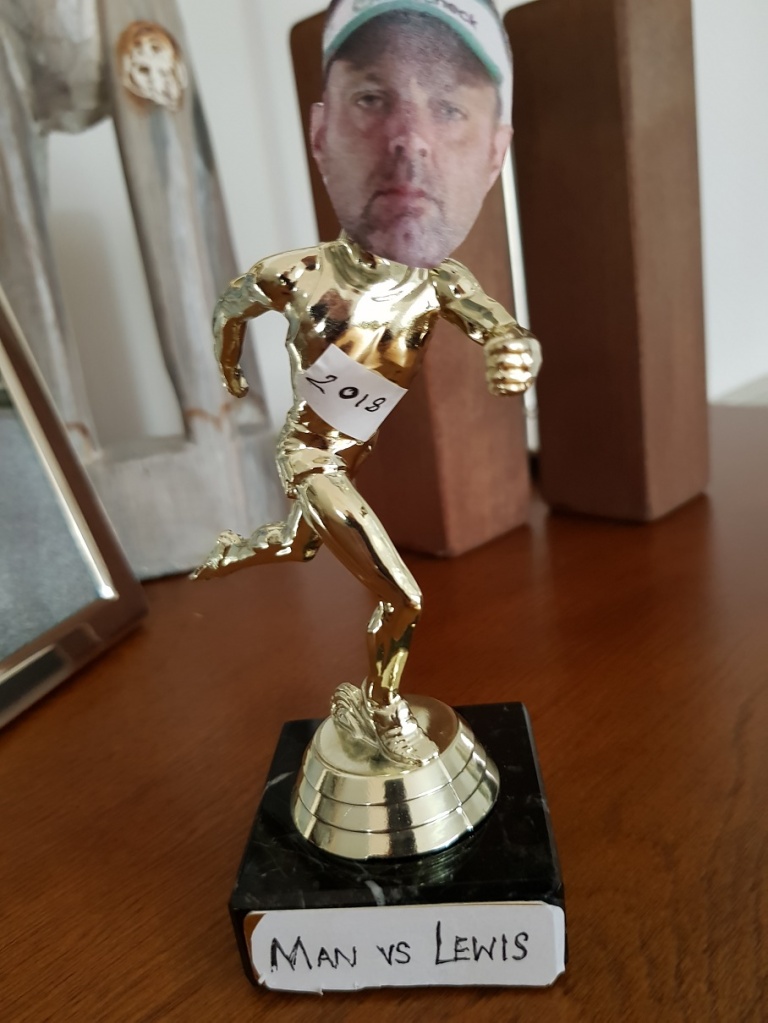 Although, after we arrived in plenty of time to pick up our numbers, and change in the changing rooms if desired, there was no hint of the town’s darker pleasures. It was lovely. A river, plenty of old pubs, and a museum greeted us as we walked through the high street and to the sports field and the start area. 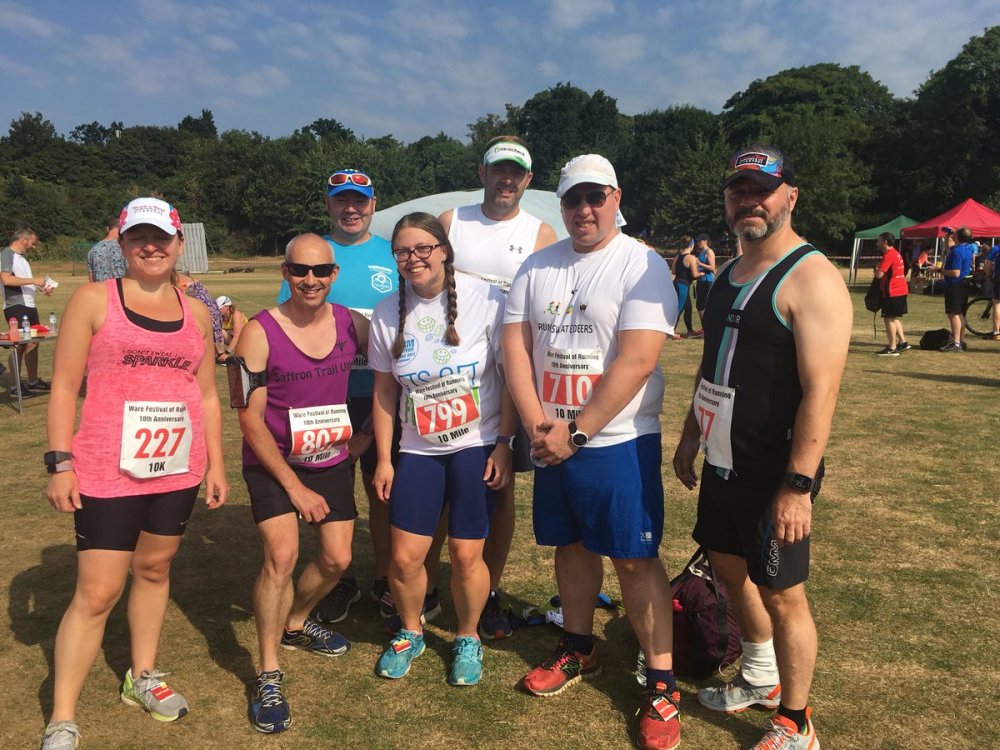 Kids races were taking place and one, in fluorescent pink socks, did make us question if Spencer was acting as a ringer. And this had a wonderful community race feel. We had a pretty decent crew. Jen, JK and Clare, Essex Baz, Bazza Norman and Nikki, Bazky, (the collective noun to describe multiple Baz’s being a Weatherspoons of Baz’s), Lindsay, Adam Prav, Rob O’Hara and Elle, and of course, the man of the hour, Lewis Clarke.

The route is virtually the same as you can see.

The rules of Man vs Lewis are pretty simple. Someone from our group, anyone, has to simply beat Lewis over the line based on gun time. 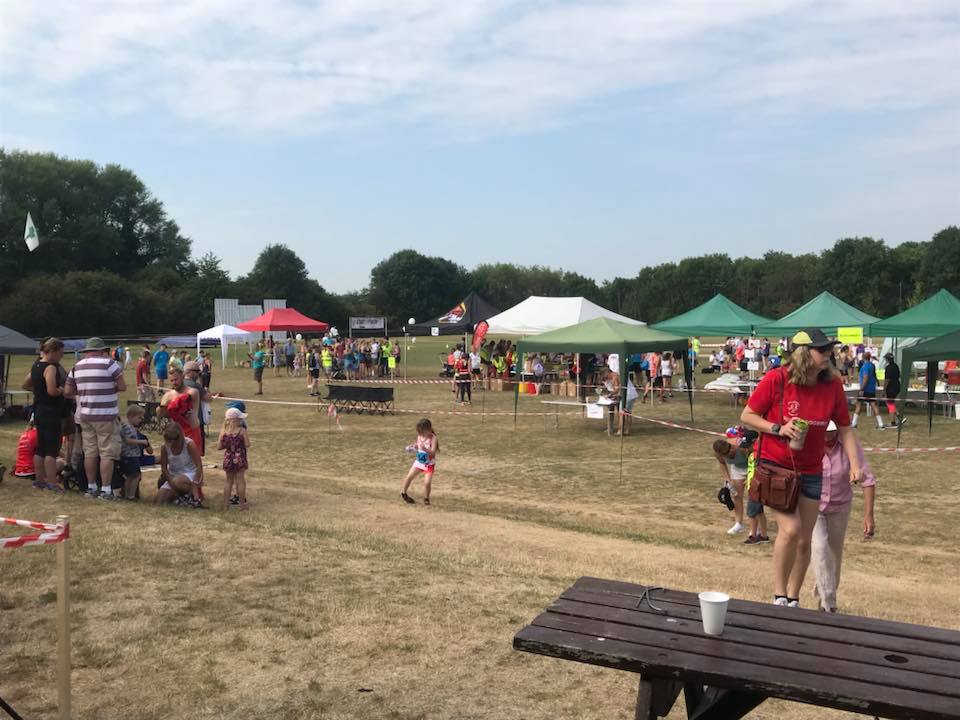 Manned bag drop, water tables and cake stands, ice creams, and a poor guy in a mascot costume sweltering in the heat, it was all very pleasant. And then, we were being asked to go to the starting funnel. Jen and I joined the throng and I was hoping I would get a good enough start to not be overtaken by Lewis within the first few hundred yards.

We waited for a bit in our pen and then noticed the guy in front of us, wearing a fluorescent orange tee, was completely covered in flies. We started to giggle as more and more arrived. He had no idea why they targeted him as he swatted away, but more and more came. He must have looked like a giant flower to them. The call then came over the tannoy to ask us move up and closer to the people in front of us. The woman to our side said “no way, I can’t he is covered in flies” and we laughed all the way to the start line.

We started with a loop of the field before heading out and into Ware. A turn one way and then another and we crossed a canal and ran along the canal path. A few ups and downs on rather broken up paths and we were out and between fields before turning and running on the streets that lead to the start area. It was roughly here, after a hill, that I saw Elle and her tripod photographing away. I gave her a shout and then continued up the hill, around the corner, and up the next hill before turning and heading down a few narrow paths through a wooded area. I had, thankfully, already used the cricket field as a temporary toilet, as I had drunk a lot of water in preparation. And it was hot. There were 3 water stops for the 10K and 6 for the 10 miler including kids who wanted to soak you (and did). It was baking as I said, and the residents of leafy Ware were out in force, flaunting any national hosepipe ban, to spray grateful runners on their way. And we were all very glad they put their porn addiction on hold for the duration of the race.

After a bit in town, we hit a park and from there a very flat area by a river. It was long and dusty and here I caught up with Baz and JK. Neither seemed to be revelling in the heat. JK was all gimpy after Tower and I walked with him for a brief spell before speeding off. The rules of Man vs Lewis were simple – whoever beats Lewis over the line would win. And I had not seen Jen for half an hour and Lewis, Essex Baz or Rob at all and so assumed they were way ahead of me.

The riverside paths lead back to the canal and I was already on familiar ground as I kept running. My knee was holding up and my knee support was down and around my ankle the whole way. It was all very positive as I jogged the last bit of road and turned down and into the field. It was then that a bike flew by, closely followed by the 10 mile race leader. Amazing running from the man but he was the only 10 miler anywhere near me as I ran the final straight, seeing that Jen Morris had finished and was now the proud owner of the most coveted prize on the UK race calendar, the Man vs Lewis trophy. 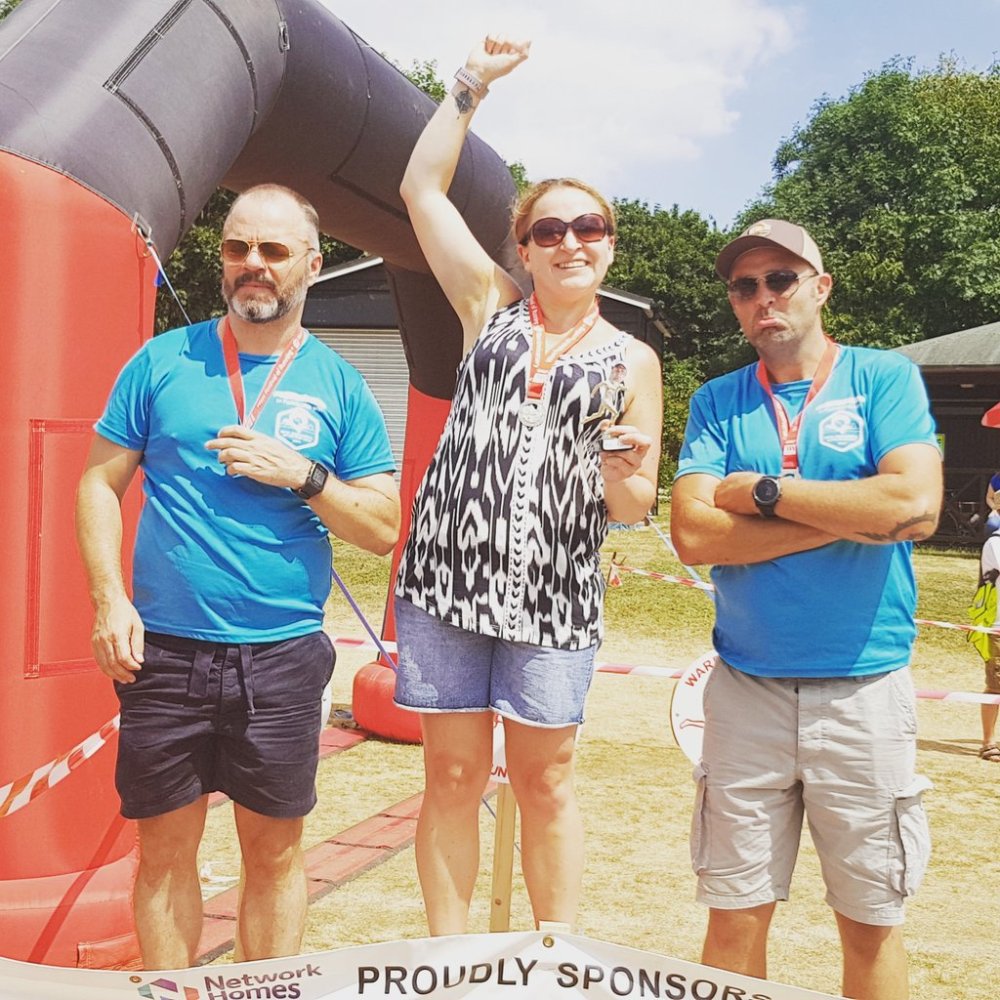 At the finish we got ice creams and cokes and I changed in the changing room as we waited for the others. Lewis came home next, thundering along in an amazing 1:18. Goodness knows how fast he would have done the 10K. Essex Baz came in next, closely followed by Rob O’Hara. And then Bazza Norman, Kaya, JK and Baz (the clowns) and Nikki.

It was a grand day out, and special thanks to Lewis for being a real sport. It was never all that fair. I could have Bungled the 10K and still come in under 1:18. We will have to find a new handicap system next year, when Jen returns to defend her title. 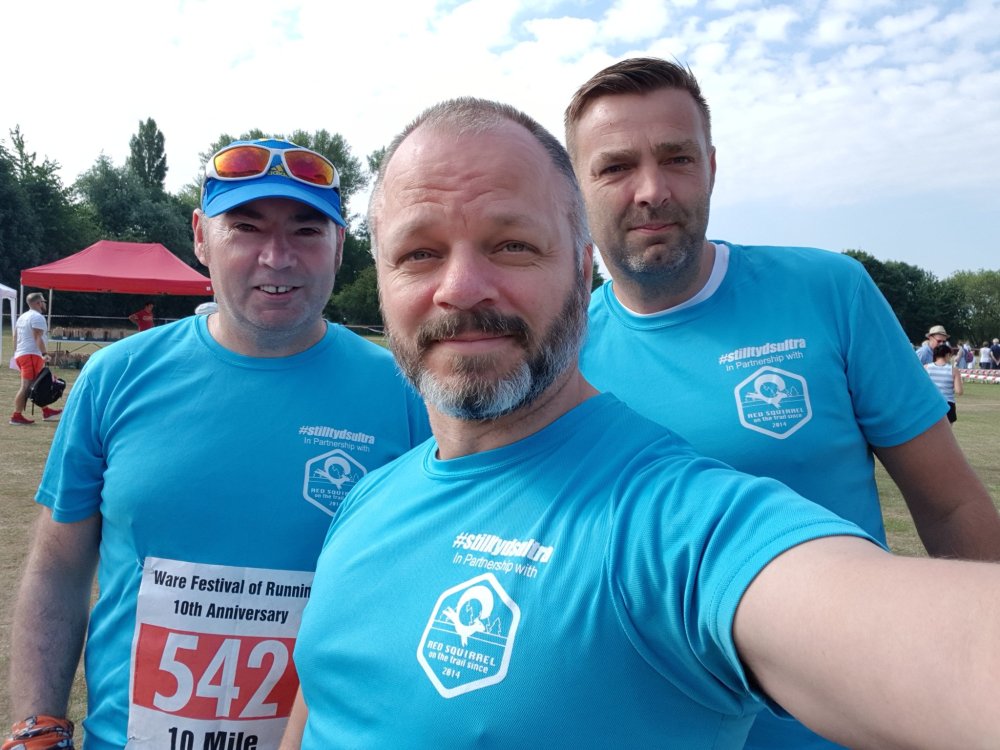 Small but unique. This race does not normally give bling but this year for it’s anniversary we got a medal and a tee. 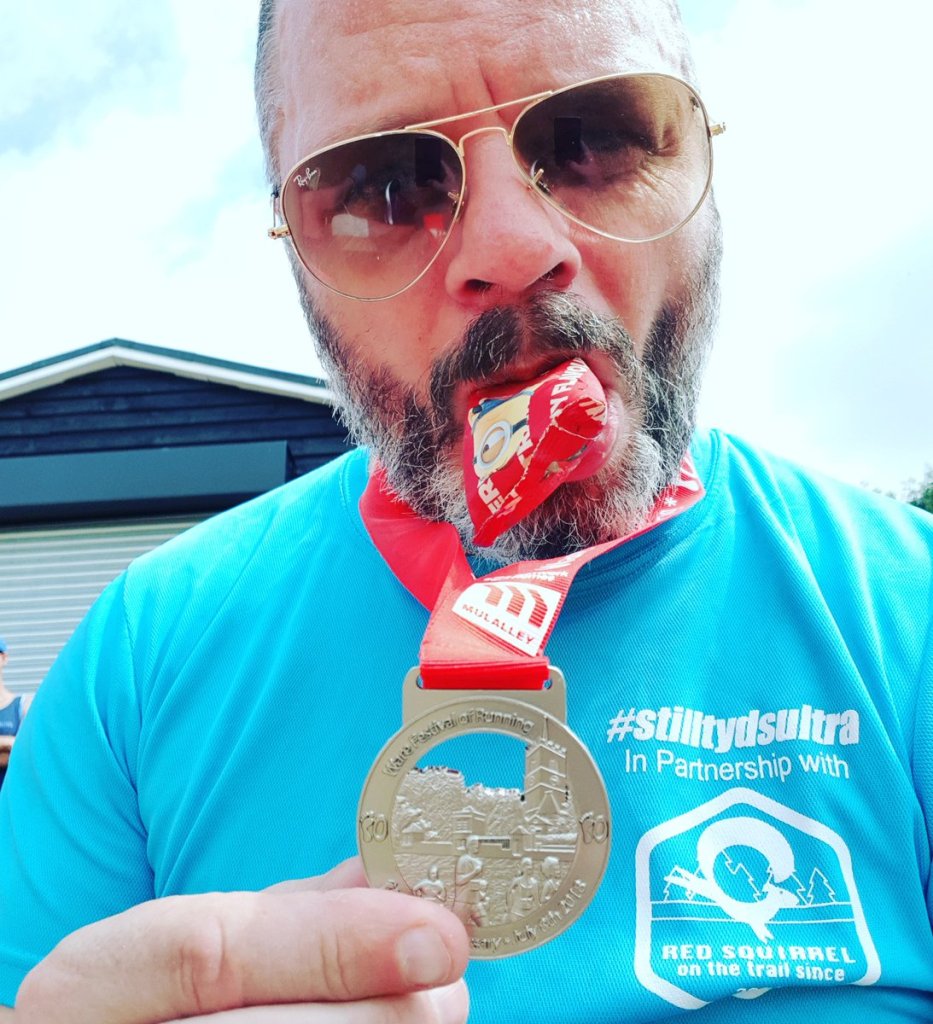 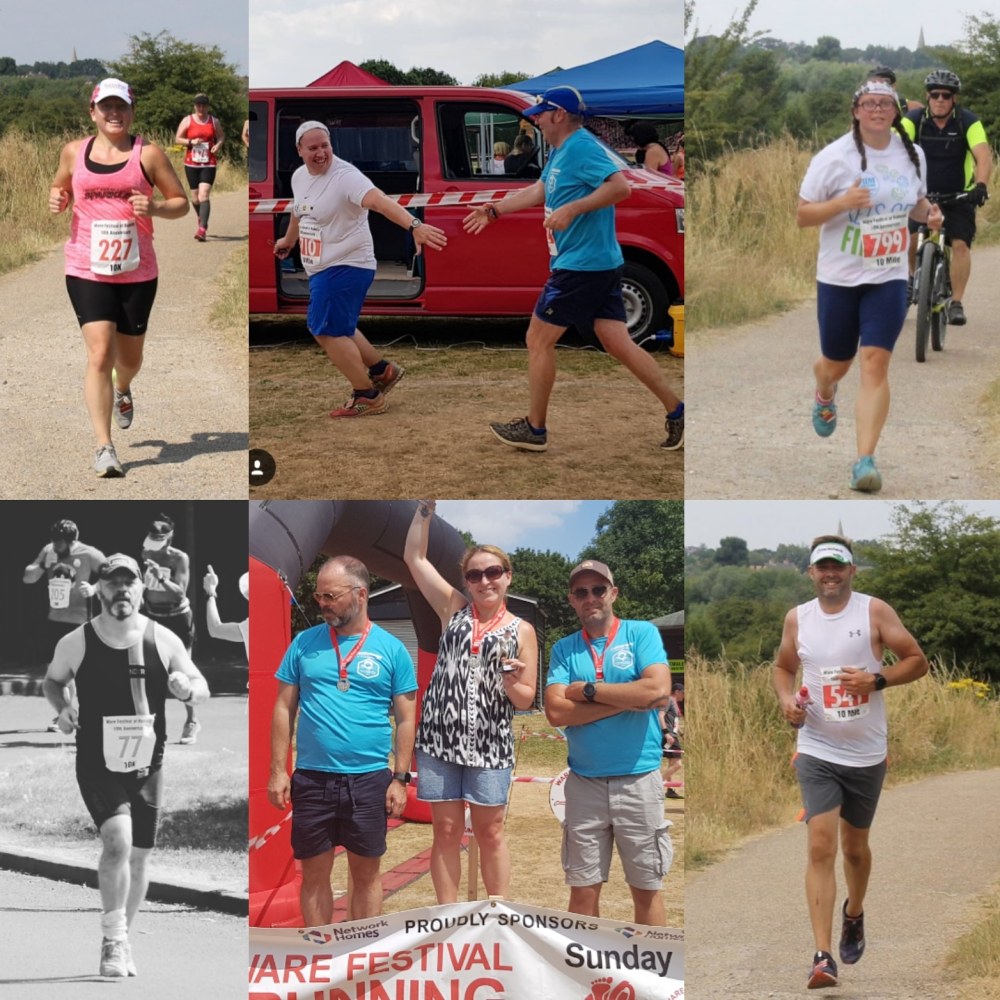 Would I run the Ware 10s again? The mob have already said they are all are and if they are I will too.

Would I recommend the Ware 10s?  Absolutely. It did remind me of the Petts Wood and Turks Head 10, as I said, and if you like that kind of race then I would definitely consider it. 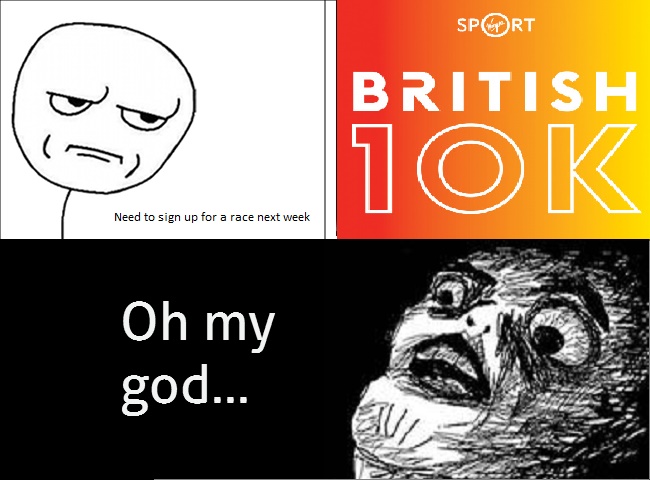