Looking back into the mists of time I found that I signed up for the Herts Half back in July. I think it was about this time that the Katzenjammers were looking at a race we could all run. With me at Hull, Baz and JK at Chicago, Baz, JK, Clare and Kaya at Beachy, me and Jen at Lucerne, and then me at Shakespeare Raceway, or Spew City as it has become known, the Herts Half seemed to fit the bill and so we signed up along with a whole host of UKRUNCHATTERS including, but not limited to Bazza  Norman, Allie Maybrey, Michelle, Spencer, Kyla, Andrew “26 Miles to the Moon” Males, Darren, Jo Sacks, and, of course, birthday boy Lee Kemp.

And it was to be a double birthday celebration too, for JK for the week before.

The Herts Half was one of the Runthrough races where they provide all the services for a venue, much like Thorpe Park half, where the medal had to be clipped in two to remove the logo, and Tatton Park Half, that had the disastrous road closures.

This would be different. In the two aforementioned races you didn’t even see Tatton Park, or go into Thorpe Park, but here you started and finished right in front of the stately Knebworth House. Right in front? Well, joust about.

With the boys completing the Tough 10 the day before, running up the steps at Box Hill, Clare drove the team to the venue whilst I enjoyed a leisurely half hour train ride from Kings Cross, and then a 20 minute walk.

A band played on a stage (covers like When the Sun Goes Down by Arctic Monkeys and A Town Called Malice) to the right by a mechanical surfboard game, On and other sport brand tents. A Cadbury hot chocolate van sat seductively waiting for me (and I would partake later – thanks to Spence and Clare for the £4), plenty of loos, a coffee and donut van and a burger van. The bag drop was in another part of the venue and had fairy lights embedded in the ceiling. We nicknamed it the disco bag drop.

I was a little nervous of my knees, if I am to be honest, and had both taped, wore calf sleeves because my left leg has been giving me a bit of gyp since Shakespeare, and I was a little nervous that I hadn’t really run since being sick. But the day was not about me. It was about meeting the lovely Allie for the first time, it was about the birthday boy Lee and his cake, and it was about JK. Hence my homage to JK outfit complete with Portland Coastal tee and white sunnies.

We met up, saw the cake, ignored the warm up (as per) and then suddenly a mass migration toward the start line began like something out of Blue Planet 2. Except most of the fish were going for the narrow gap in the barriers at the 2-210 area, and it was very overcrowded. We heard the news we already knew come over the tannoy, “don’t worry, you are chip timed, and the time won’t start until you cross the line,” and then we were heading off, time to, as I quote the Beastie Boys here, “strap on my ear goggles and I’m ready to go.”

I can’t I won’t and I don’t stop. The race started outside Knebworth House (tick) and then for the first 3K or so you run a long loop around the grounds, coming back to the house and then heading out, past an old church and into the country lanes of Hertfordshire. 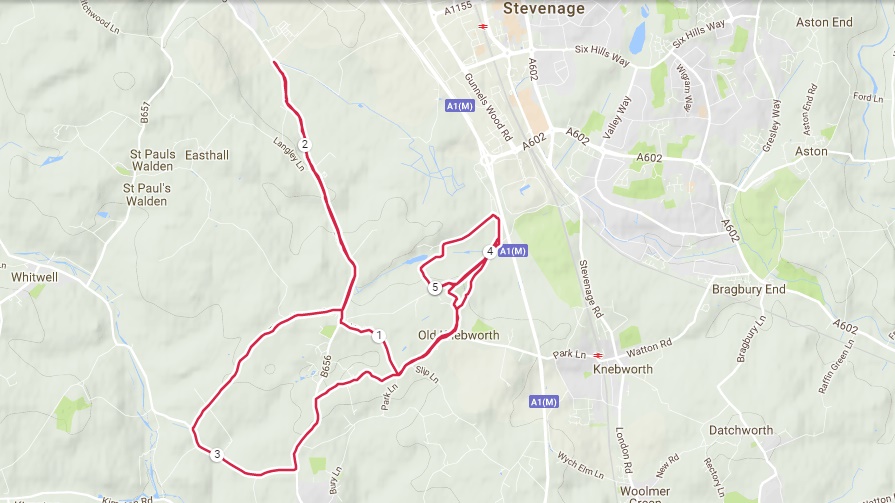 And this was pretty much it. It was pretty, it was the countryside. The English countryside is the same. It could have been a chunk from the Yorkshire Marathon, or Chester, or any race where you run along hedgerow lined narrow lanes.

And it was lumpy, inasmuch as it was not flat.  The lumps were small, but they were many. The largest lump was around mile 9, I want to say, and that was still small enough to run up. 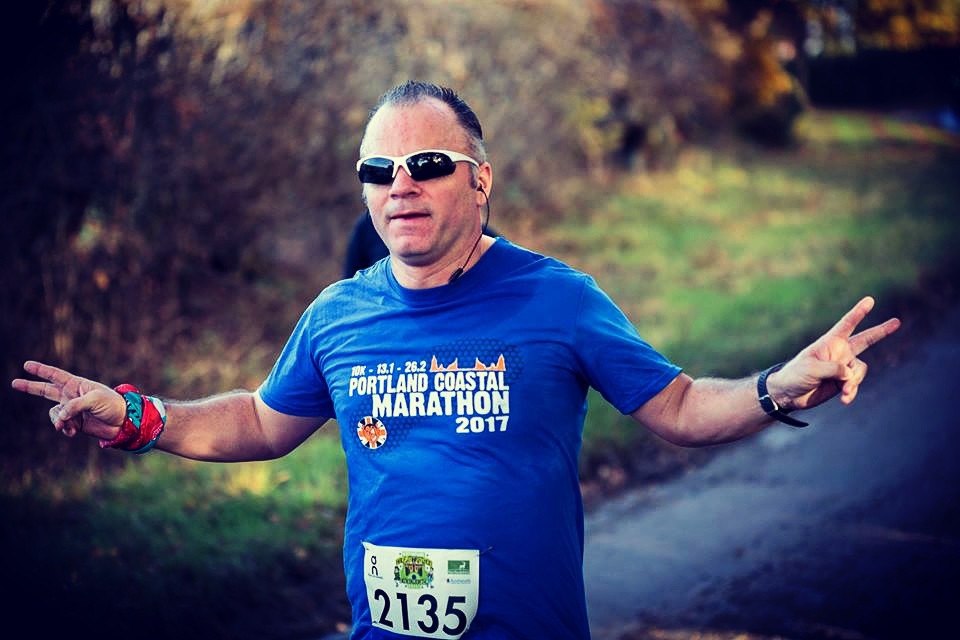 I ran the whole way, albeit stopping for a few seconds after about 5K when the tape came off my right knee, then again at 10K when the tape came off my left knee, at the three water stops, to take a few swigs of the bottles (not cups) and a 10 second breather at the top of the largest lump. But other than that I was happy to keep plodding, enjoying a rather relaxed 2:03 time.

I knew JK, Spence and Lee came in ahead of me, as the route did include a very long there and back, and I saw the whole team on that one, but I was a good ways ahead of the others and so I decided to get changed and ready for our own birthday Cakeathon. It was then that a guy in orange touched my shoulder, and said he stayed with me the whole way, he had been on my shoulder and I, without knowing, had got him through when he wanted to slow down and walk. And that made the event for me, that was nice. I have relied on plenty people in my time and I was happy to have repaid the debt. I should tell people if they helped me. It is nice to hear it.

As always with Runthrough races, the medal is unique, bespoke and cartoony. I do have my fair share, perhaps more than my fair share, of these now as I reached bling #149. But I am not ashamed to say I am a big fan of Matty Wood and the kids, they put on a great event. And well done to them for this one,

Free photos, albeit not tagged, but free and on Facepage, an award winning flapjack, a disco bag drop, the Cadbury hot chocolate van, a fun and free race tee, and a bespoke medal earned running a sunny half marathon in the country with my friends… These guys…

which really does remind me of…

How could it have been better? Seats maybe, anywhere. For a music venue (the medal even includes Robbie Williams and Liam Gallagher) there should have been somewhere to sit to eat, drink, chat, change out of our running kit in the Disco Bag Drop.  The first lap around the grounds was very very cramped, as the paths were 4 people wide. So plenty of bunching. The photos are free but at times the photographers, or some of them seemed to be dicking about a bit. As the lead runners came along the there and back, by some porta toilets, a chap with a camera was taking the picture of another guy playing a guitar, rather than the potential race winner coming by. Thought that was a bit poor. Others did suggest that maybe some of the marshals were on day release from prison as they seemed to be miserable as they shook their tambourines, but I didn’t see that. I saw high knee kicking, tambourine shaking, clapping smiley faces from all the marshals at one of the busiest and best parochial halves I have done.

Would I recommend the Herts Half? Absolutely, yes I would. Do it!

Would I run the Herts Half again? No. Too many races, so little time.

NEXT UP:  Shhh, after the failure at Shakespeare Raceway I discovered that I am already signed up on the Saxon Viking Norman Relativity Run in Margate. Marathon 10 of 12 is planned there.