I am an equal opportunities runner to a degree, looking at my races I do like to travel and, other than the stipulation that there has to be bling (Serpies I am looking at you with an evil glare now), I am happy to look at any race, as long as I can get there. It doesn’t need to be a mammoth national marathon with the population of a small sized town taking part, although I am a fan of them. It doesn’t need to be a famous or one that has a following amongst my running community.

So I thought I would put together a list of races I have considered over the years that will eventually need to be completed, for closure if anything. These are races I have heard about through random searches for bling, or been told about by others, but all peaked my interest for one reason or another.

In the first weekend of December I actually considered this for 2016 to end my year. I will, unfortunately be running the Battersea Park Santa Run instead dressed as a reindeer, but only because I am spending the rest of December sun seeking and photographing bioluminescent plankton in the Maldives. So 50:50, good and bad there. I think I found this race when looking specifically for an international marathon in the sun, but then, of course, it now appears in the banner ads of virtually any website I open. 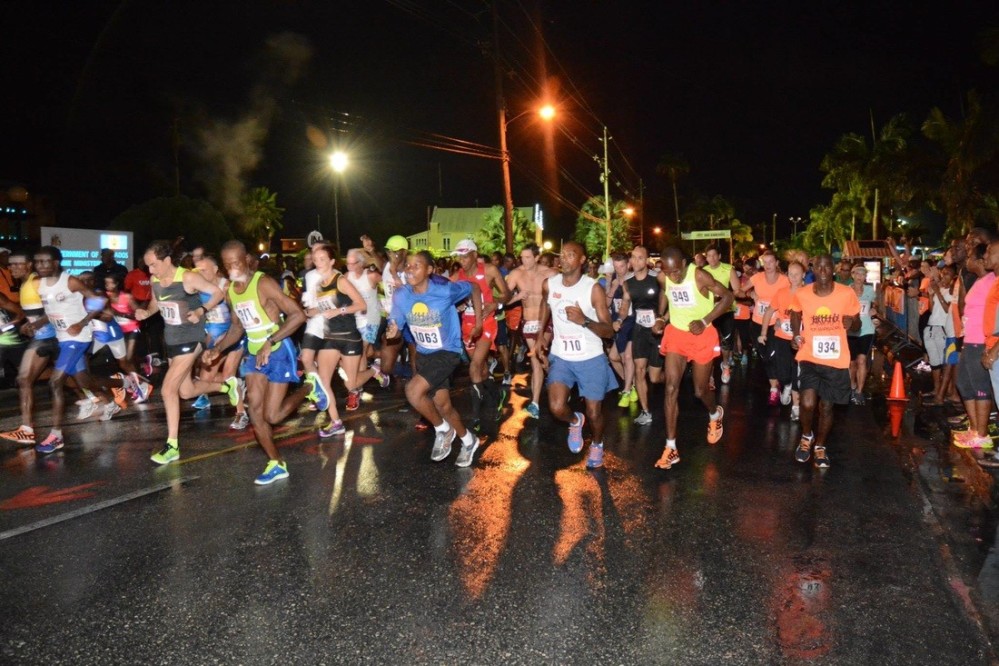 Held in the first week of December there are plenty of other races to keep you occupied too, family runs in case you take the family, but in reality this race is just something to do when going on your Winter Sun holiday. Oh, and yes, it is a night marathon by the looks of it. 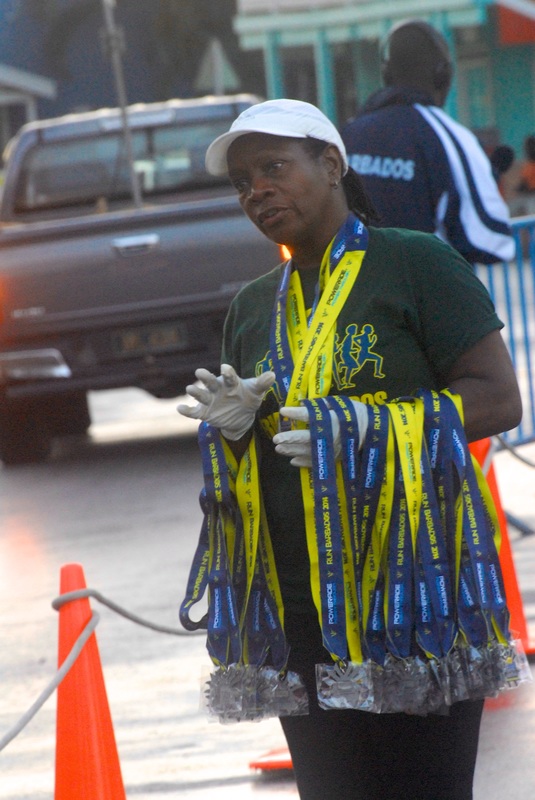 A definite maybe for me, this 55KM marathon has all the ingredients Icelandophiles drool over. Having been to Iceland for a wonderful time in the Winter, and having ticked off all the tourist must do’s, I am okay with going for the weekend just for the race. It is really expensive at 338 Euros, but that does include transport back to Reykjavik which, from my time there, was the most expensive thing. 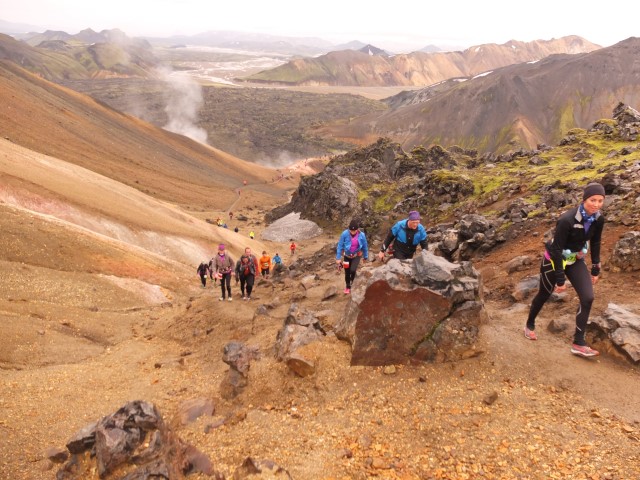 In balmy July and taking in the kind of scenery that prompted the USSR to send it’s cosmonauts there for their moon training, this has the greatest opportunity of being included in my 2017 race calendar, fitting nicely between Race to the King (double) and the Berlin Wall 100 miler. 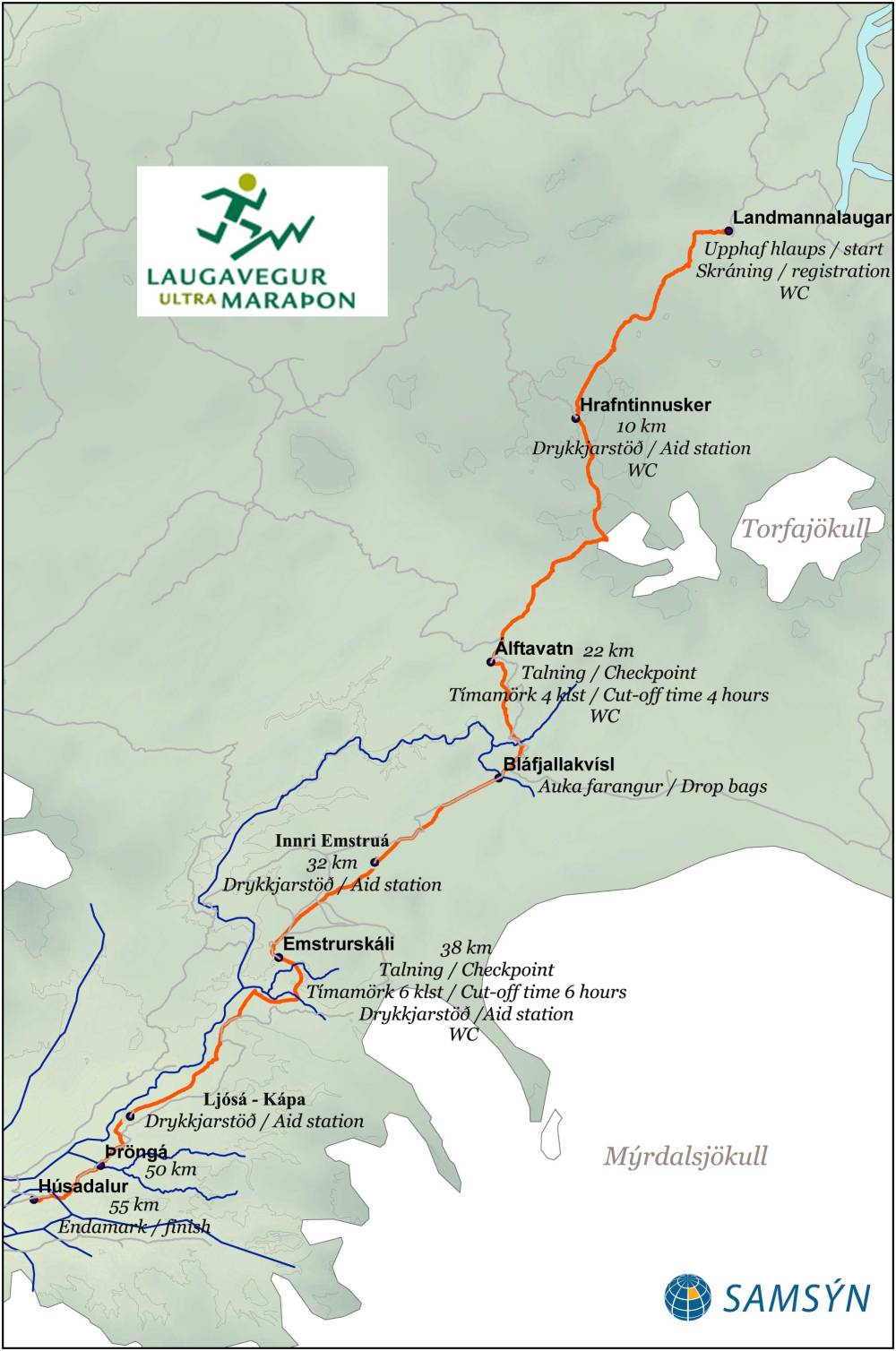 Bali Marathon and Half

A new one on the list because of someone I follow on Instagram showing off the medal. And it is a lovely medal at that. I do like to see overseas medals, even the thought behind them. I like that they are different to the ones you get here. 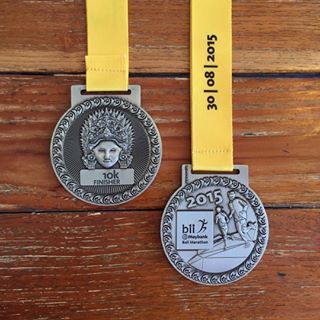 The half medal is lovely too. 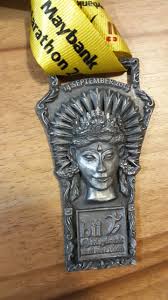 Not too sure about the humidity but hey, am sure there are other things you could get up to on Bali after a sweaty night running. 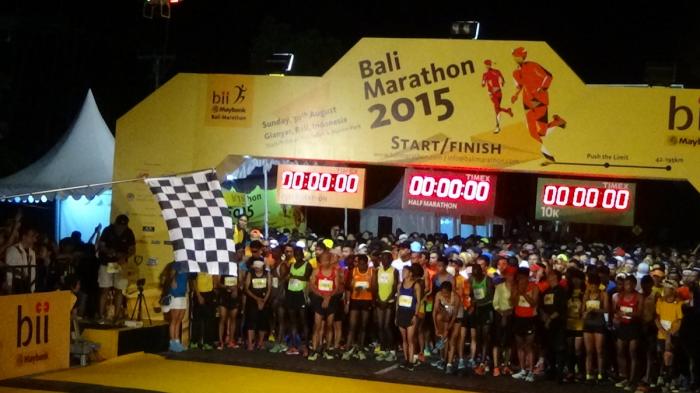 I can’t remember which Expo it was but I picked up a leaflet about the Fjords Half Marathon but I have always had an affinity for the fjords. 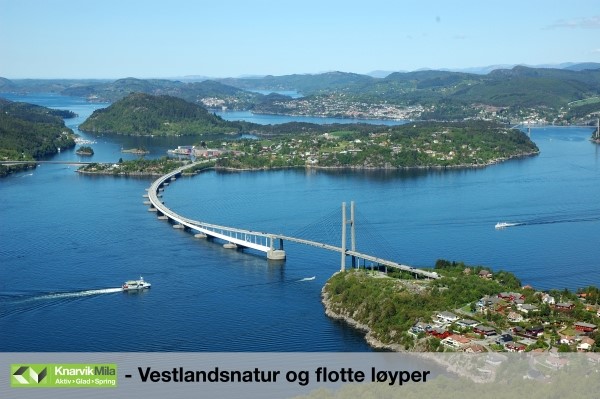 Norway is pretty expensive, and Bergen especially. It would need to be booked as part trip there anyway. I think it is a little too pricey for a half marathon weekend still… 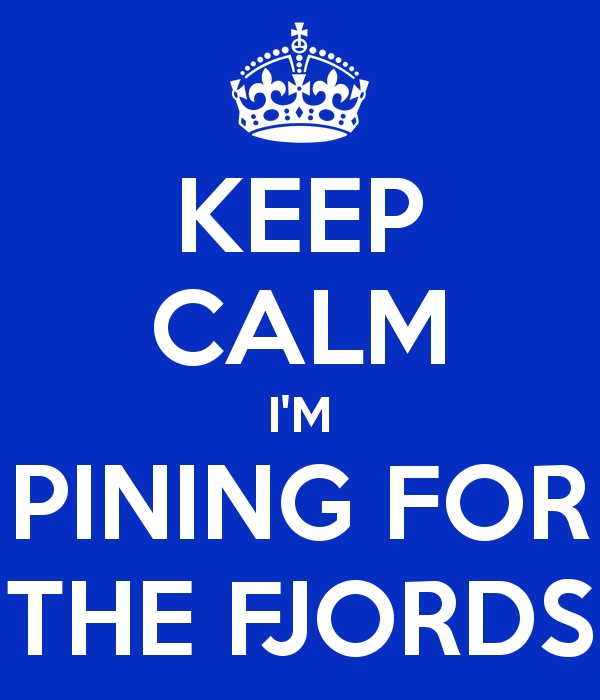 Staying in Norway for a fjord to summit race that has the kind of elevation only the most dedicated mountain goats prefer. Again only a half but if you are after a challenge this looks like one to me. 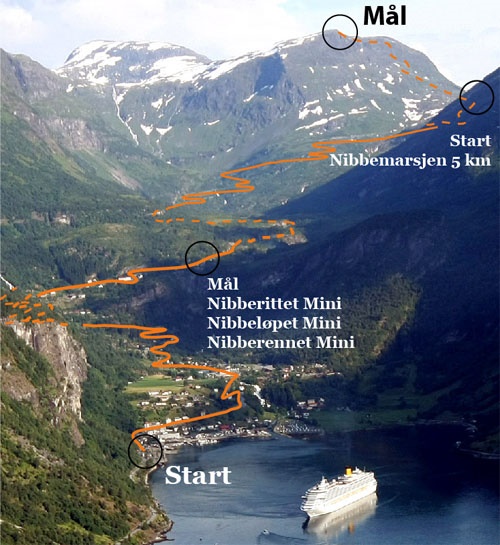 Now cancelled forever, which is sad, due to lack of funding.

Again a medal search found this one. I was looking for unique medals in my quest for 100 and chanced upon a volcano race where the medals were made out of pumice stone from the volcano itself. A real shame it has been cancelled. 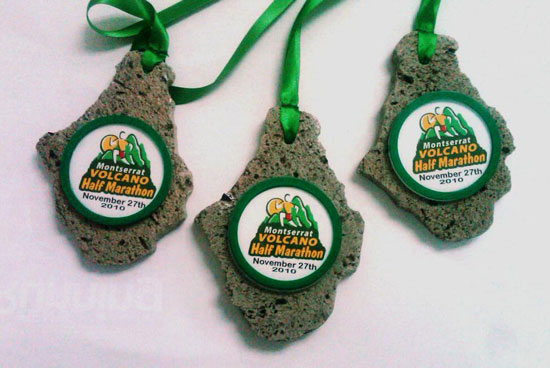 Fact: It is not a marathon at all, but rather a short distance ultra.

I was a race ambassador for the Two Oceans last year. I blogged and tweeted for them. The organisers really want this race to be something special. They lay on an International Friendship Run (IFR) the day before. This is fun itself. There is a ceremony, all the countries of the international runners taking part have flags, they call out the countries and you take your flag, then you run a 5K with a racing legend. The union jack was stolen the previous year and they didn’t replace it, so I represented Malta, running around with Haile Gebresellasie. 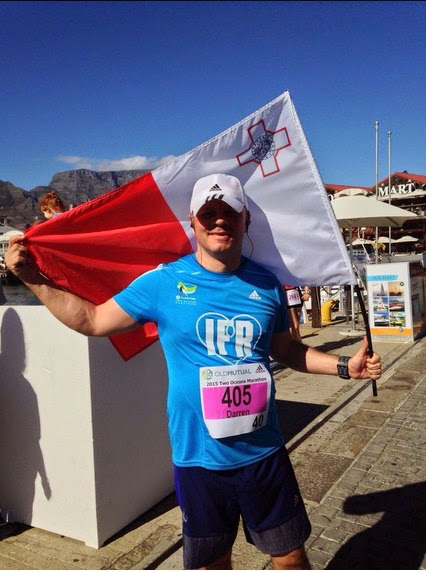 I ran the IFR and the Half and will be going back for the bad boy, the ultra marathon. It is the race that at one point you can see both oceans atop Chapman’s Peak. Although last year due to bush fires the route was changed. So I HAVE to go back.

I was signed up for Lucerne last year, it was in October and I booked my spot before Pancreatic Cancer UK offered me a spot at the Berlin marathon, and so I deferred it to this year. However, I really changed my mind and signed up for the more challenging Beachy Head marathon as punishment for bailing on a half that would have cost over a grand for the weekend in Switzerland. 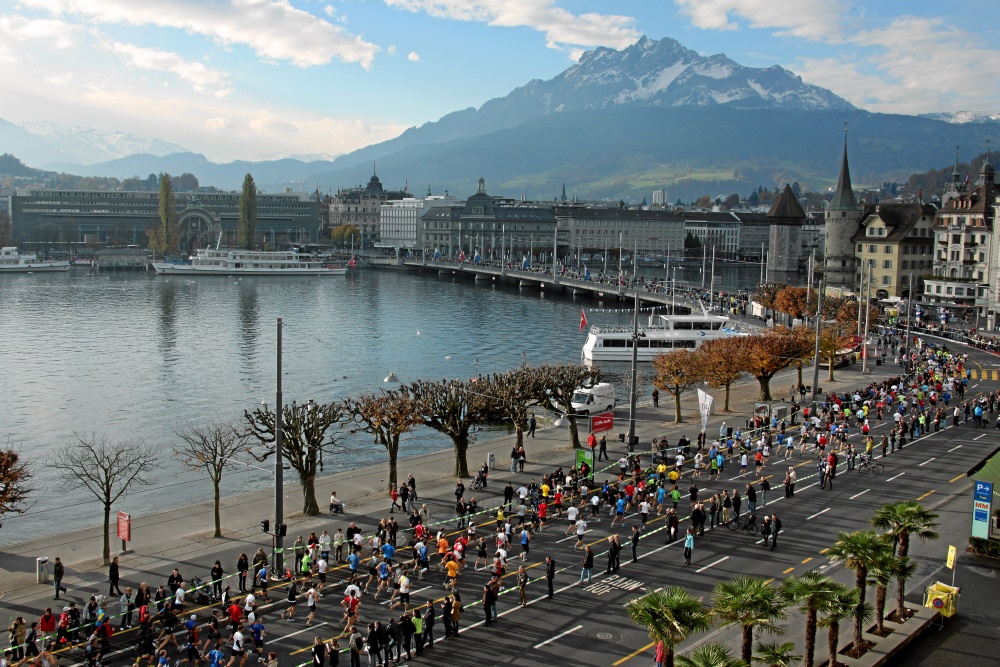 Mountains in the distance, around a lake, beautiful architecture and perfect surfaces. What is there to dislike? Well, nothing. I just didn’t want to spend that much money on a half. I may well run it as my Oct 2017 mara after bailing on the half two years in a row. Third times a charm.

Hint: From Laura Murray, just do the half. The mara is two laps. Stunning as they are. You only need to do one to enjoy the view.

Originally created to boost community spirit post-Vietnam war, the “people’s marathon” as it is known is one of the largest in the US.  If you take out the three majors, and the Disney races this is the race people want to do, with over half a million people running this race in it’s 40 year history in Arlington, Virginia. 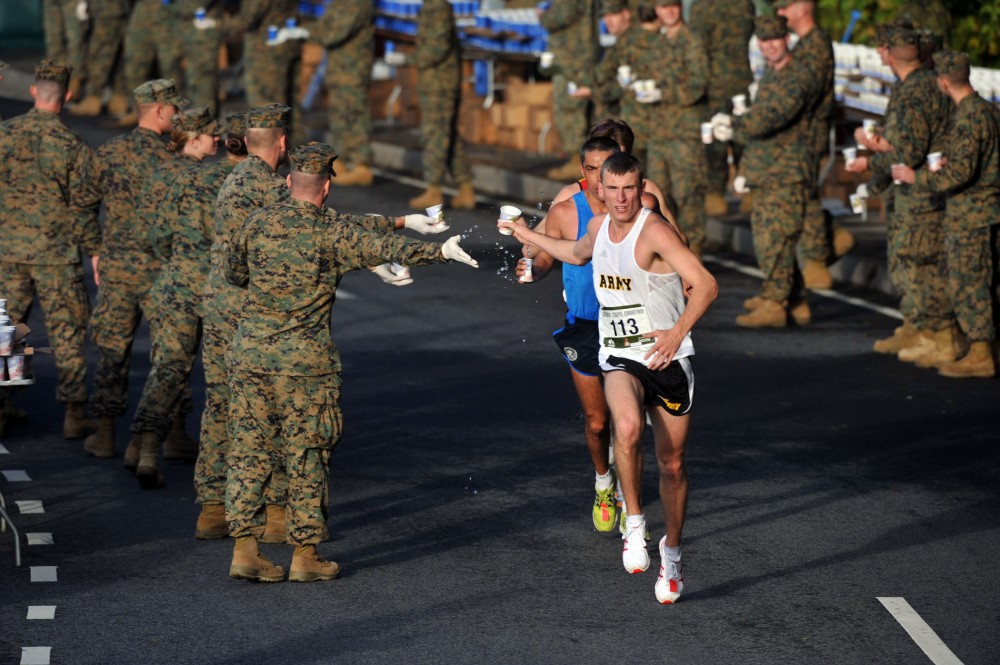 The spirit and the pride entice me. I am a huge supporter of the armed services who keep us safe. And if I am going to head back to the US for a race that is not a major, it would be this one.

Back home in the UK for the final one and the Rat Race Wall Ultra. This follows the length of Hadrian’s Wall for 69 miles. 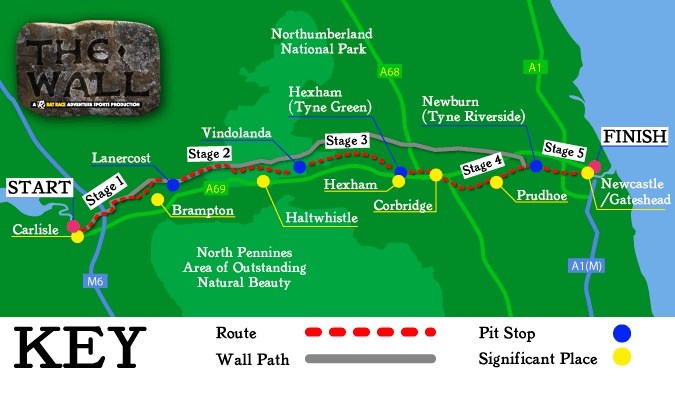 Apparently there was an issue regarding provisions, and the things people are complaining about are the things people complain about regarding RTTK and RTTS. But I did not have much of an issue with either, so there is a good likelihood that I will be running the Wall at some point. And with a cheaper entry if you are in a pair, I may well be looking at one of you to join me. 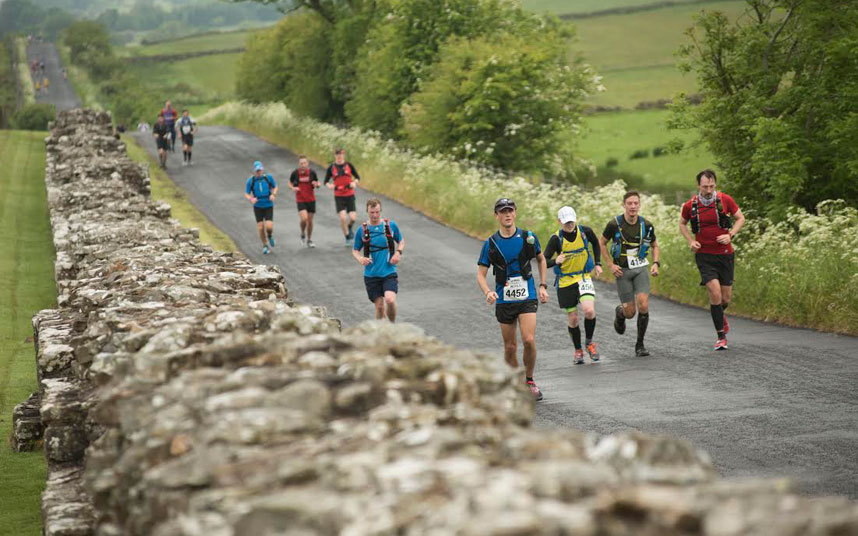