The internet is broken, or rather Twitter is. It only allows you to scroll back 3200 tweets and, as I have tweeted ten times as many as that, I cannot find the first time I talked with Marty Ewers about the Alice in Wonderland Caucus Race. It must have been late 2012, or early 2013 that he, we, or I, chanced about the huge Mad Hatters Tea Party medal that fast became our Holy Grail. This was an aim, a target, the must have for two medal magpies who ran 30-40 races a year and both targeting 100 bling. But there was an issue.

Saxon Viking Norman races have very small fields and to get into a race takes luck, or a waiting list. I entered the waiting list last year and was lucky enough to have someone drop out and got in in 2016. Shock! Horror! So had Marty. And so in the middle of marathon season, twix Manchester and Copenhagen, I found myself signed up for a 6 hour lap race. Oh, did I not mention these factors? Yes, it is a six hour race, but you can run for a little or as long as you like. And laps? Well, they are 3.85 mile laps. And it is the Running Awards event that night and I have the Run with Strava 6K run too beforehand. Oh, did I not mention this is a Friday race? So much weirdness. But all for one of the best medals going on the UK race calendar.

The Saxons, Vikings and Normans marathons and challenges are a unique bunch of events. The Cakeathon is great. There are dozens of cakes for you at the end of each lap and you can get your fill, if you haven’t already, at the end, as well as having the huge medal. There is a Fudgeathon. Not sure what that is about, and won’t hazard clicking on the link. The St George’s and Agincourt marathons, Beatrix Potter challenge and the Battle of the Somme Centenary run all give you the option of gaining huge bling on the Kent coast. Most of the races are in Samphire Hoe next to Dover. Other races are in Gravesend and I am already signed up for the Punk Run in August.

How do we know about these races? Now SVN are not on twitter. And TBH they probably should. But as they keep their numbers low. Some of the races have as little as 100 people, maybe it is for the best. They are high quality medals and popular races amongst a loyal crowd. So why change it?

For me this involved another night away in a hotel. This time a small B&B in Dover after a 2 hour train down. And all this after a week with an ankle injury that meant no training or exercise in any form post-Manchester Marathon. And therefore no training with 4 weeks to go before Copenhagen Marathon.

This was a bit of an experience. The B and B was about a 15 min walk from the station, through a pretty deserted high street and up a hill. It scored highly on Booking.com but I wasn’t expecting to see what I saw. Walking through the small parking area, filled with cars, and vans, some of which clearly hadn’t moved in a decade, I walked into the front entrance hall to side tables piled high. A door to the left radiated heat and noise and on closer expection had a roaring open fire, TV on loud, and was filled to bursting with stacks of newspapers, magazines, boxes of childrens games, knickknacks, ornaments. These people were real hoarders. The kitchen was opposite and in much of the same vein, both sinks full of dirty dishes. Every surface covered in something. And the rest of the house, from the conservatory complete with 4 foot mirror with its frame adorned with superglued childrens action figures and happy meal toys, through 5 floors of sideboards and walls covered, was the same.

My room, on the day Prince died, was very much purple rain. 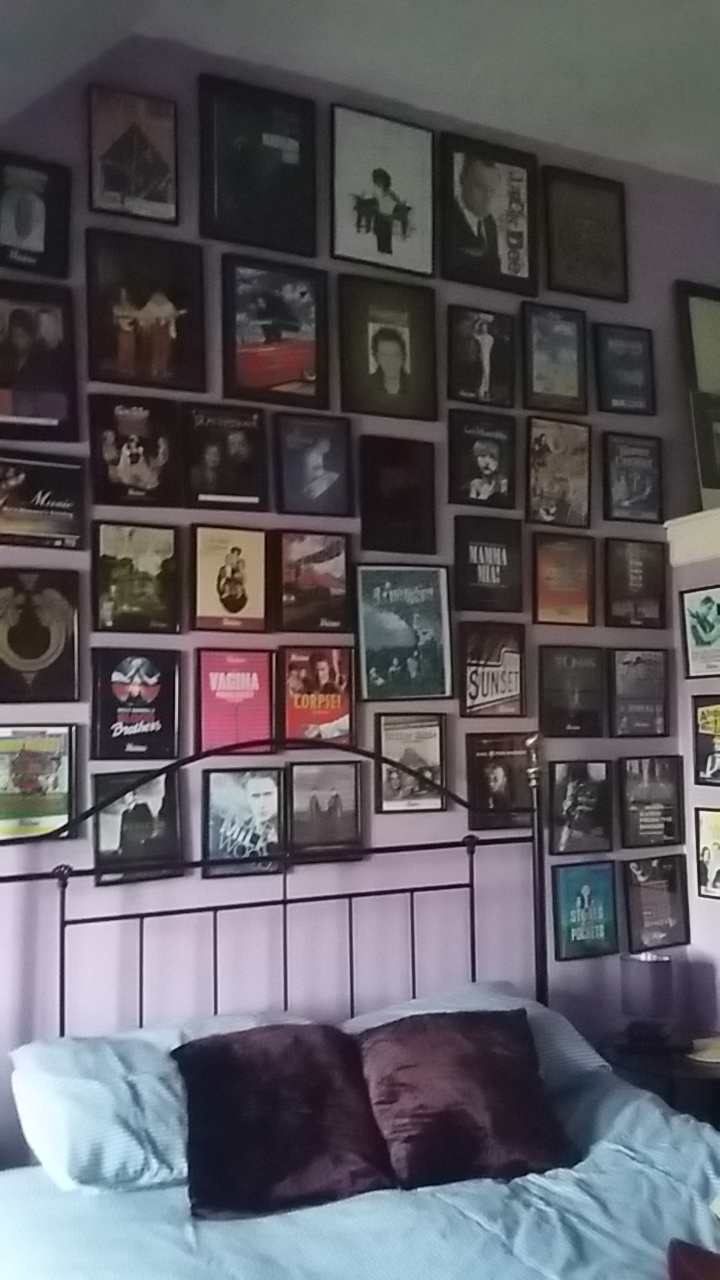 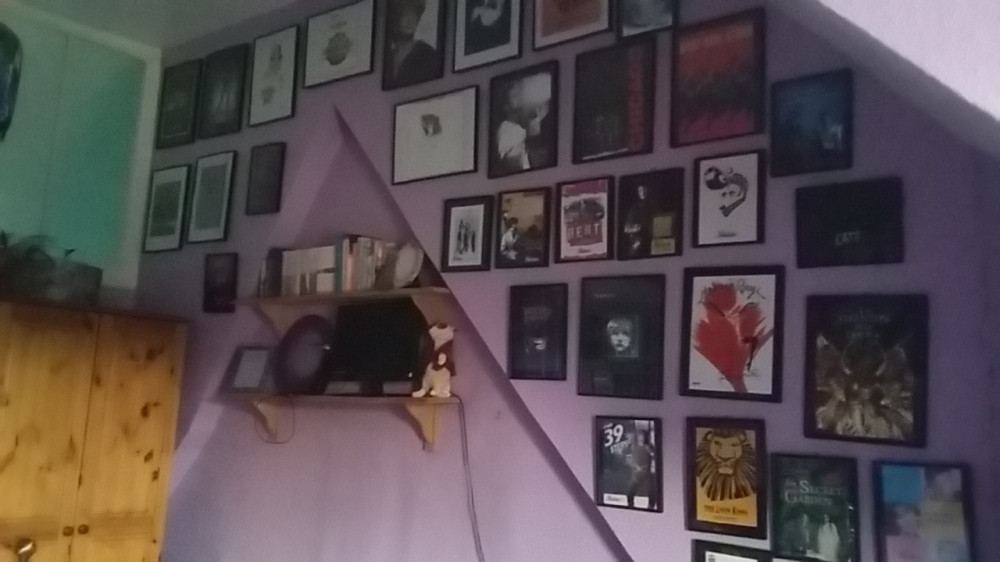 And the whole place seemed to be a bit of a shambles really. Paying the owner was amusing, as he was not prepared to deal with cash. Dropping it once, then twice, then wandering off. They were nice people and this clearly was a family home they have opened up to the public. Not what I wanted, but in the end I had an amazing nights sleep there and it was very comfortable. Adding, if anything, to the experience.

The hotellier recommended La Scala a 5 min walk away for dinner. And, if you find yourself in Dover running one of the SVN races I HIGHLY recommend it. I had the sausage pasta and it was superb. Very cheap too. I have not had a 3 course meal with 2 beers and a bottle of water for £20 in I don’t know how long. 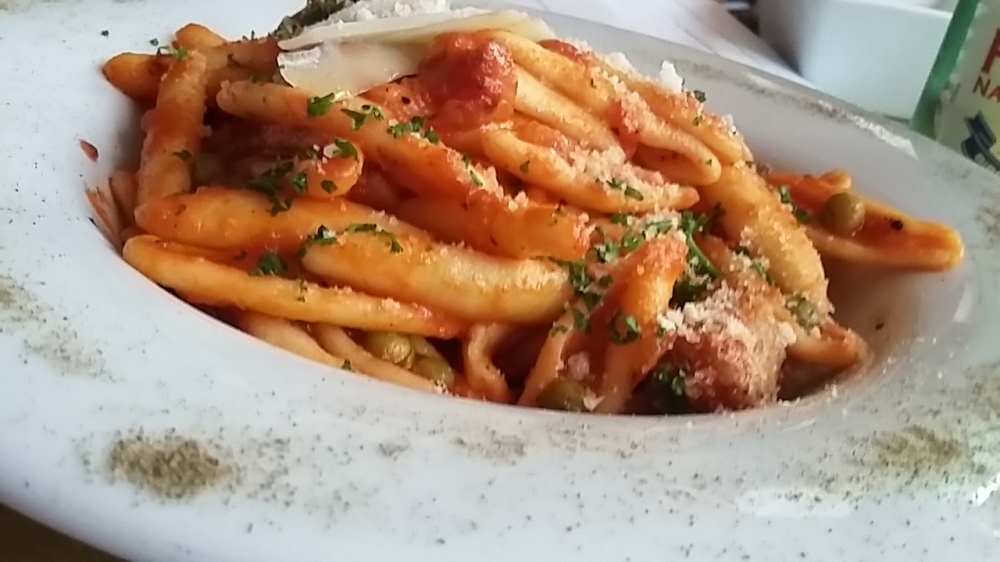 After a 3 mile drive that basically meant this venue was not accessible to those without four wheels, you drive through a tunnel through the cliffs and are out into a nature reserve at the foot of them, right on the sea wall.

The route was a there and back. You started at the cafe in the car park. There is a gravel path and a wooden bridge, a sharp drop on very loose gravel and then  most of the route is a switchback along the sea wall. This would be half into the wind and half with the wind behind you.

I was very unsure of my ankle. It has been over 2 weeks since I cracked it on the bone a fortnight ago on the Wednesday after the Manchester marathon. Taped up, I hoped it would hold out. This was also BIG MEDAL race. People run, or even walk, a single lap for the medal. I could not do that. I did not want to do my BIG MEDAL the injustice of limping a single lap. Talking with the UKRUNCHAT people I wanted to do at least 2 laps, with the hope for 3.

I had my ipod ready and was planning on hiding in music but Marty was on for a twofer weekend, two marathons in two days, ahead of him so I kept him company for the run.

Lap 1: Very sore on the ankle. I think the whack made me walk on it dfferently so I am thinking there is a bit of tendonitis there. The outside of my calf was very very tight. Still, card punched and was on the way around for a second lap.

Lap 2: Warming up a little, my normal run involves hating it for about the first 5 miles and then my love of it kicks in. So, half way through the lap as I hit mile 5 lo and behold my ankle started feeling good. Got to the end, I had done the race justice but hey, punched my card, and decided on a third.

Lap 3: We are jogging more than running, keeping up a 10 minute mile pace, got some photos taken. But with an eye on getting home to the Running Awards and relying on the kindness of a random stranger to get me back to Dover for the train this last lap was to be my last. 11.55 miles, when I could not walk without a limp all week.

I think chatting with Marty really got me through. As did seeing all the runners on the switchback. The White Rabbit costume was well received and words of encouragement came thick and fast. The greatest cameraderie being between the rabbits was great, oversized clocks were waved, ears were up. It made the day for me as I looked forward to seeing them on the next switchback.

Really? It is more of a tuck shop than a goodie bag and was very well received. 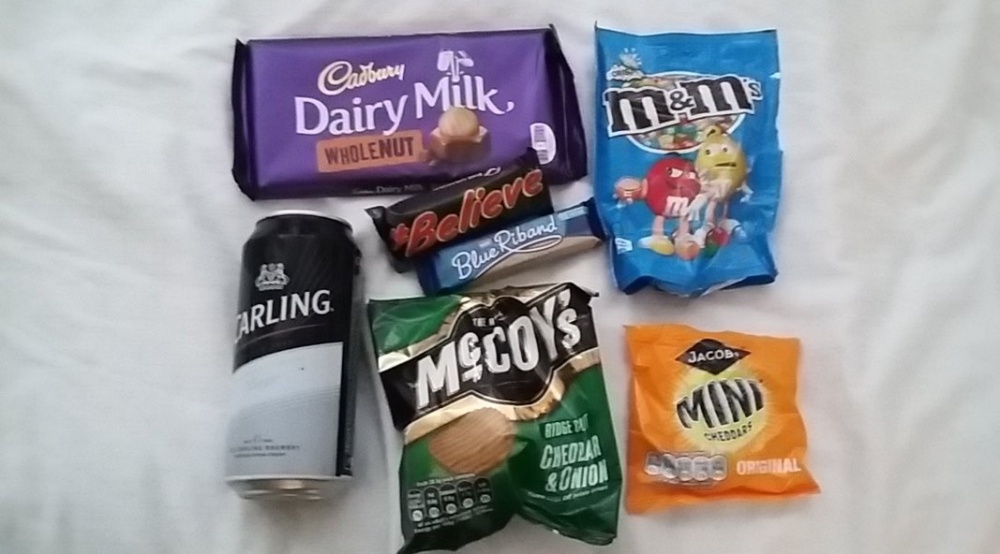 What can I say about the bling? It is pretty amazing. A scene from Alice in Wonderland. Many people thought it was a Disney medal. It is huge. Although for me there is the slight problem that it does not have the Walrus, Carpenter or Clams that are actually in the Caucus Race in the story. But that is small potatoes. 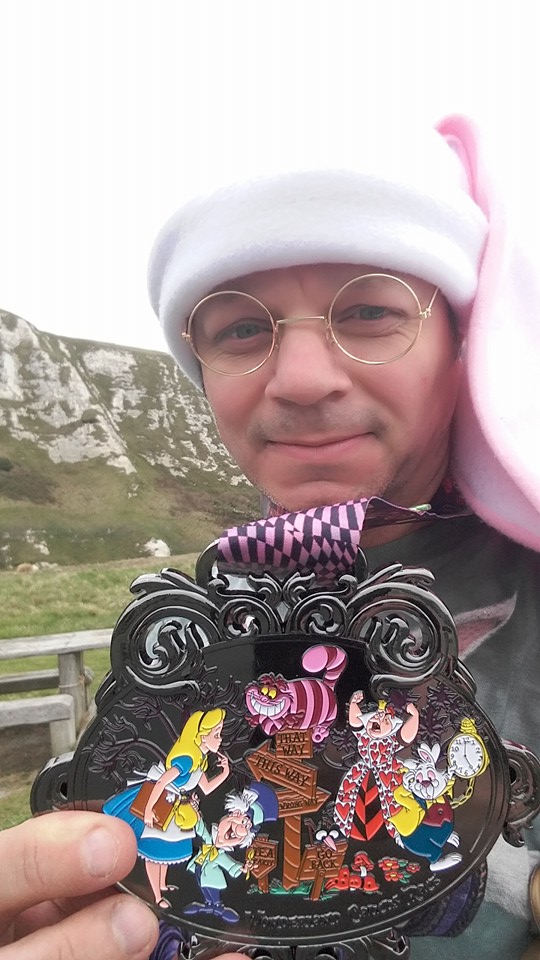 Would I run it again? Probably not but it has opened my eyes to lap races. People are concerned about how dull that would be. As Marty and I reached our 3rd lap, despite my ankle I could have gone on forever. Well not technically forever, but certainly another hour or two. I could certainly have finished a marathon. Actually maybe. I have this still and it needs to be sewn onto my marathon kit bag along with the Berlin and Manchester badges. 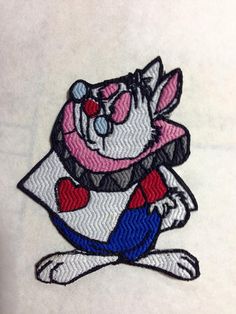 Would I recommend it? People are crazy loco for the medals but they won’t necessarily like the laps. I would recommend the Saxon Vikings Normans races though, Traviss and his wife and support crew are amazing. The format is perfect. You run a lap, you get your card punched, you can tap out and ring the bell whenever you want. You have a multitude of cake and drink and sweets at each stop. There is a theme. The Cakeathon is a great one. Agincourt.  Chocolate-a-thon. Punk Run. I am doing the latter in August. I will be going for the distance. 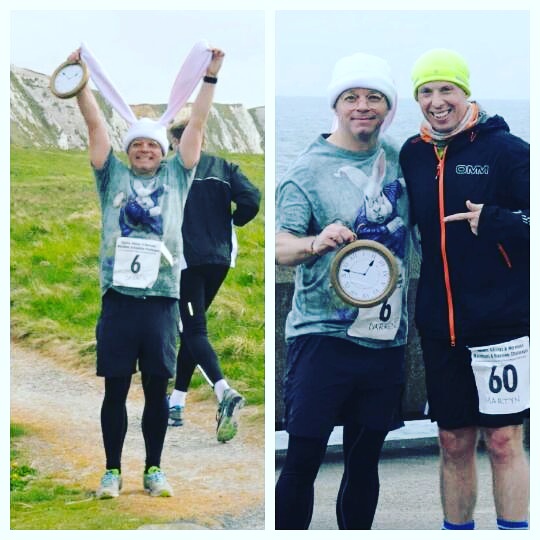