When I ran the Berlin Marathon back in September I had already booked the Copenhagen Marathon in the coming May. It was a ploy on my part, and one I fell for, that basically meant I was as calm as Hindu cows when it came to the race, because I had backup. This wasn’t the end. All pressure removed.

But the gap between September and May is a long one and, with all the fervour of the London Marathon ballot, I decided on an earlier race. There are four back-to-back, Paris, Manchester, Brighton and London. I had tried to get into Brighton but they jacked up the prices after “releasing” some more numbers after the London ballot had closed. Basically fleecing the poor suckers who didn’t get in. I decided against it and instead picked Manchester. I had never been. Plenty of #UKRUNCHAT people would be there. It would be fun.

Now I do not advocate this. In fact this is truly one of those do what I say, not what I do, kinda things. But I really barely trained. I want to work out what is best for me training-wise. I trained well and hard for Berlin, putting in long hours 4 times a week until the race day came and I did fine. This time I wanted to do the bare minimum, work out how far the low end of a regime gets me, and then find a happy medium. This would then become my training bar that I must set and stick to. That was the plan and, like I say, do not copy me.

This was not just a race. In London I get up, amble down to wherever the race is, maybe see people there, race and then head home. This was a train and a hotel booking. This was packing and planning different race outfits to cover all weather eventualities.

This was one of those great times when there is a Twitter DM group that has been going for weeks leading up to the event, where people can voice concerns, chat, and indulge in banter. Meetups were organised and thanks to Sherie and Jenna for the Frankie and Benny’s pasta night and then the cupcake-a-thon at the Toll Gate pub. People I knew where jetting in from as far away as Stockport, Marty Ewers was driving up from Exeter at 4am (crazy fool). There would be a big group. Some of which met up at the start. Remind me to tell you about the start later.

Manchester la-la-la. I had never really wanted to go. Much like Liverpool, where I finally visited to run the Rock and Roll last year, I had no need to go. I do not care about United or City. The music is good. But really I needed a race to get me there. But from the start, I kinda wished I hadn’t.

When I arrived it was hailing so hard that everyone was looking up at the roof of Manchester Piccadilly station. This soon subsided and was replaced with torrential rain. Yay! On the day of the race it started so coldly that cars were frosted over and wouldn’t start. And by the end of the race it was so sunny that we were all sunburnt, red faced frazzles.

Remember that Extreme Weather machine Ming has in Flash Gordon? I wonder if the merciless one was working his mischievous magic on the North West.

The route map is here. From what I remember of the route it was mostly residential. There were a few out and backs. At times I had deja-vu for other races. But maybe I have just run so many now they all blend into one. There is always a long stretch near farmland that then turns right down a hill and under a road bridge on the outskirts. It wasn’t massively pretty and it was very suburban. That is all I remember.

Okay, before we light the bitching lamp, let’s get to the good.

The Bag… I mean, the Bad

There was some bad. For me it came down to the basics. As a runner I want to finish a race, go over line, get medal, water, banana, go get bag, get on a dry t-shirt and then go meet family. And these fundamental things went wrong. 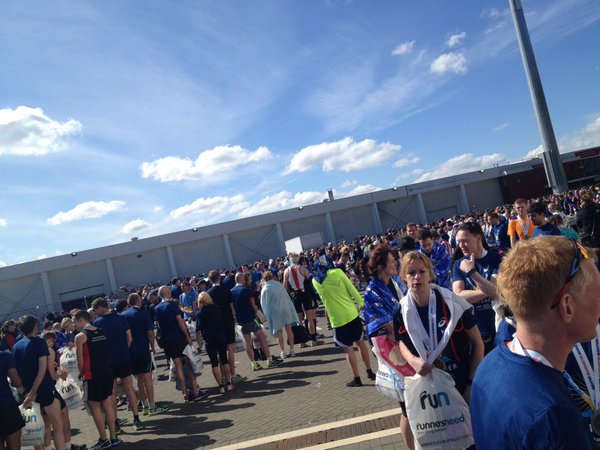 It is not like these things cannot get fixed. They just need to get fixed, esp start, the bag drop and the race village. I would recommend something as simple as that. Close off the race village, change bag drop format, and mix up the water tables and voila. Everyone’s happy.

Without training for this I chalked up a couple of halves, and fast tens leading into Manchester and it became quite obvious that a nice comfy half is my normal level of fitness. The first 10K was only a couple of minutes short of my PB, the half I had stopped for water a couple of time as my Camelbak water tasted like sucking on a bilge rat but still it was a pretty normal time for the distance for me. Then came the issue with not training.

I was fueled alright but at half way I started to feel a little weaker. I dropped to a 5:1 run/walk strategy using music to queue the changes. But this only lasted to about 35K when I needed to slow down more and moved to a 3:1 run/walk strategy, meaning I was spending more time walking in the baking sun.

This was not something I am proud of, let me tell you, but it opened my eyes to options and possibilities. And I think the fast walking 16 bridges training is helping with the walking section. As I was fast walking not just ambling along.

So how did I really do?

And happy to have finished… 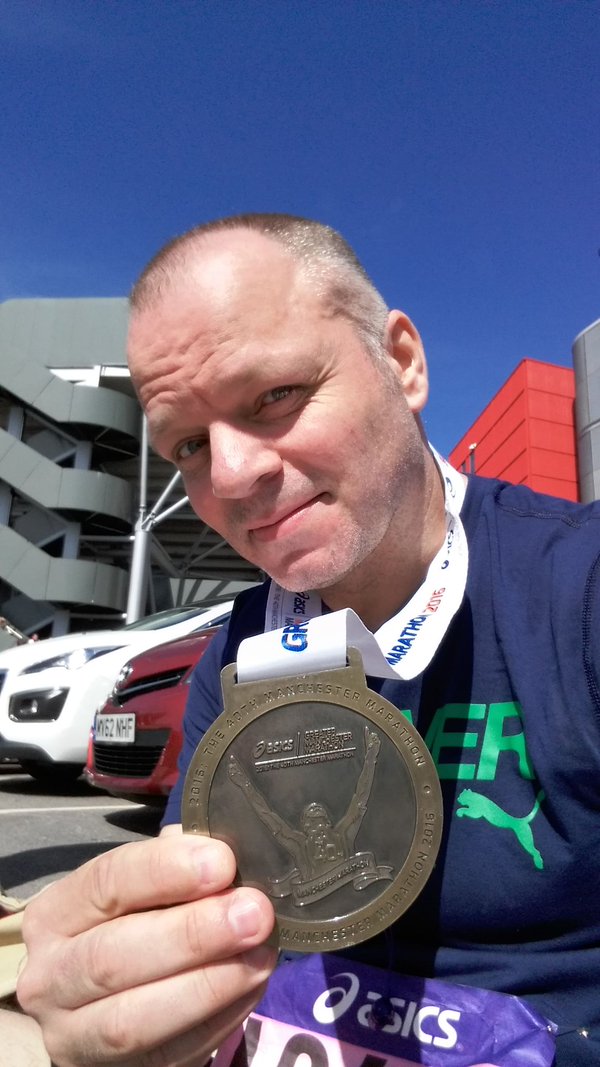 I love it. It is really a great medal. Huge and weighty. I race a lot and get a lot of bling. THIS feels like a marathon medal.

I will take so many positives from this weekend. I met some amazing community members. I got a PB. I worked out what does work and what doesn’t in my training. I worked out fueling. I was fortunate enough to stay in a comfy hotel that had a great friendly restaurant onsite for my FEB (Full English Breakfast) the next day and I am absolutely glad I went.

Would I run it again? No. But not because of the bad things that went wrong, but because there simply are so many races out there that are run better.