This race brought an end to a pretty amazing year for me and it was a very familiar affair in Greenwich running a race organised by the awesome guys at Runthrough in a park that I have raced in 5 or 6 times since taking up running. I should have been aiming for a sub-50 but I guess that milestone can wait for the new year because post Berlin Marathon injury and subsequent loss of fitness has meant that I will be happy to get around sub hour. In short, I just wanted to enjoy a yuletide race and thus purchased this beauty.

How could I not? I do have a penchant for mince pies and wanting to do something a little unique to separate myself from Santa costumes, elves and Christmas puddings I thought it seemed a sound choice.

The route on the website is a little deceptive knowing Greenwich Park as I do. Whilst this looks like a nice 3 lap run through the woods on well paved paths… 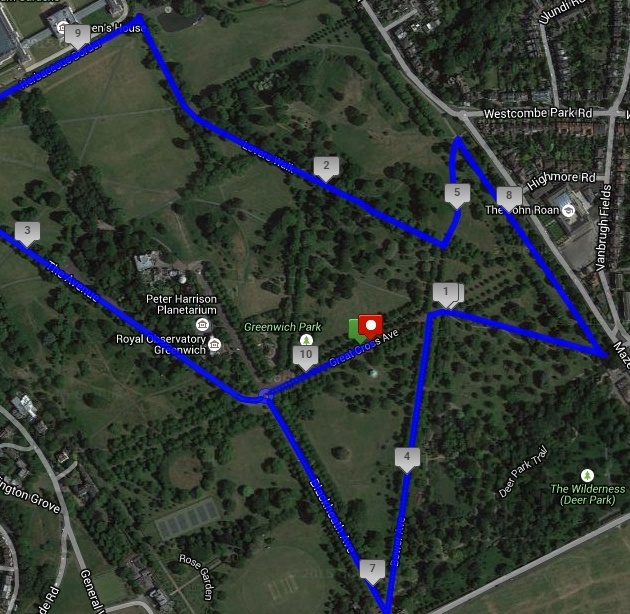 I know that at the end of the laps and stretching from the park entrance to the toilets is the kind of long slow hill that feels like this by the second lap and worse on the third.

It was pretty painful and I took it very easy going round, walking at points at the hill on all three laps and twice at the water station at the top. It was by no stretch of the imagination a good run and my On Running Cloudsurfers feel like clod hoppers rather than sleek running shoes. They are Herman Munster shoes and I really need to reinvest in some Cloudracers again.

It also came up pretty short for me and I am wondering how I lost nearly 300 yards on the course. Still I should be happy with the 56:49 chip time in clod hoppers, on a three lap course dominated by a hill after 9 weeks out injured. And I kind of am.

My Throwback Thursday tweet this week was my first Runthrough race, the Bushy Park Half 2013 which I think was their inaugural race too.  The medal was very old school.

Things have moved on for them in a big way and their current crop of medals are great. No bargain bucket stuff here. All unique and all special for the occasion. I have the Battersea Power Station and the Olympic Velopark medals and now this one.

Now they are small. They are very small. But their uniqueness makes up for that. I highly recommend you sign up for their season pass if you can. The Victoria Park (Queen Victoria) and Wimbledon Common (Wombles) and mid year Greenwich race (Meridian) medals are great.

Oh and the photos? Well, they are always free and on their Facebook page. A nice touch when some RDs will try to squeeze more money out of you. Top marks all around.

I genuinely do like the Runthrough events and the guys are awesome. Spent some time catching up with staff members and everyone is so enthusiastic you cannot help but leave with a smile on your face. Although I do not have any planned in 2016 I do highly recommend them for the London and South East running crowd, in particular the Victoria or Battersea races where there is a great chance of PBs.

Would I run it again? Probably not. I am not a fan of Greenwich and the Mont Blanc height hill in the middle.

Would I recommend it? Sure. I would recommend any of their races. They are good peeps.