The British 10K: The Worst Race on the British Running Calendar or…

I am running this alone or…

And I thought it couldn’t be worse than last time…

THE PREAMBLE
Runners are not a tight bunch, they will buy shoes and kit until they have barely enough money for a cup of tea and a bourbon to dunk in it. Given the sheer volume of races available now though there is a lot of anger at those who attach stupid prices to their entry. The inaugural West London 10K, another race coming out under the Vitality banner, is 35 quid. The British 10K was fifty! Yes, 50! Let me say it again, fifty Great British pounds. And the route isn’t nice at all this year either.
I ran the Nike British 10K as it was in 2012, my first year of running and I hated it then. I have had nothing but questions from friends asking WHY? WHY? WHY? Well, I like big races, I am running far fewer this year, and it fits in nicely with my Berlin marathon training. Okay!?!? Yeah, I am regretting giving those parasites money.
When I ran the British 10K sponsored by Nike I did comment it was more about Nike than the charities or the runners, whilst the BUPA London 10K is all about the charities and the runners, and is a damned sight cheaper.
Anyway, rant over the new course is dreadful! 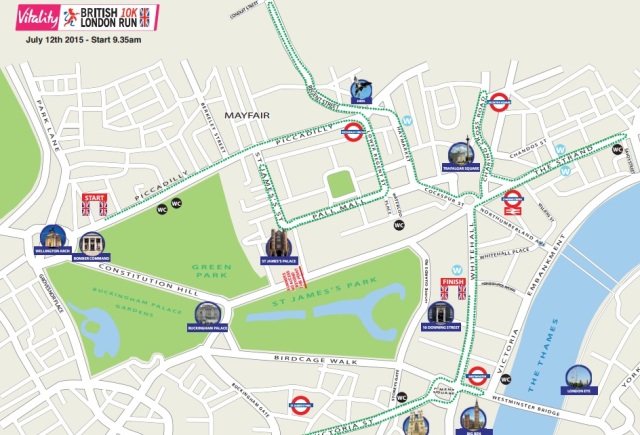 The website tries to talk it up, saying you will pass the monuments but really? Charing Cross Road? Victoria Street? This is what the idiots on The Apprentice would come up with if they were making a bargain bucket race with huge mark up on entry. Surely the planner looked at what the BUPA London did to combat the Embankment being closed? Um, no! Clearly not? Why? Because that worked? And Vitality are all about the $$$.

Anyway, I shall run it, it is the first race since the marathon training has started so I am hoping I will do well. The weather is supposed to be wet and cool, just how I like it. We shall see.

Ok, I had a little bit of a rant yesterday writing up the preamble, but let me tell you that is NOTHING compared to what is about to follow…CLUSTERF#CK TO THE MAX

The bibs were one of two colours, Red or Blue, which, now looking back only reflected what bag drop you spent half an hour at the end of the race at. I was red. I run sub hour 10Ks and thought it would mean I was in a corral that would allow me to at least get a 55 min run, or something close to that to stretch the old legs out given I missed Park Run yesterday due to a photo shoot (I’ll tell you about that later).

What happened though, as I walked down through the parks and through Mayfair toward the race route, was that red and blue meant nothing, race times meant nothing, what mattered was that you got their early and waited in line for hours to be at the front, or pushed your way in. There were no corrals, they called what happened “waves” but really it was a first come first served mass movement toward the line, akin to the boarding call at Ryan Air, just with 20,000 people all trying to get on board.

When I finally got to cross the start line and tried to open out my legs it was nigh on impossible. This was a herd, this was Jurassic Park for Charity, you would weave your way through slow joggers, who I do not have an issue with, and then there’d be 8 people walking side by side in the middle of the road. Was there no race etiquette advice in the overly glossy magazine that came with the bib? There should have been for this was no more a race than a stumbling, weaving run/walk through crowds of people who were determined to walk from the start, and not only walk, walk in the middle of the road, talking to their cohorts.

A decent time was always impossible and I just kept my head down, ran the whole way, came under the hour just, and, much like 2012, have vowed never to do this again!

The bag drop on the way in seemed fine. Bag drop on the way back was a comedy act. The Alpha Female Troll, faced with thousands of runners wanting to get home, started looking down at the sea of bags and then randomly called out numbers she was seeing. As if this was the right thing to do. It took me half an hour to get my bag, not because it was difficult to find, as it was about 5 feet away from me, but the sheer number of people combined with the utter lack of organisation was unparalleled.

Seeing the insurmountable odds pretty early on I just planned on constant movement, no walking, no water stops, and just kept going. And that is pretty much what I did.

As for the route, I have seen it all before, so just kept head down, listened to music and scowled a lot.

The British 10K medal is ok , my 78th medal in just over 3 years of running. Not bad, bespoke, but not worth fifty quid. 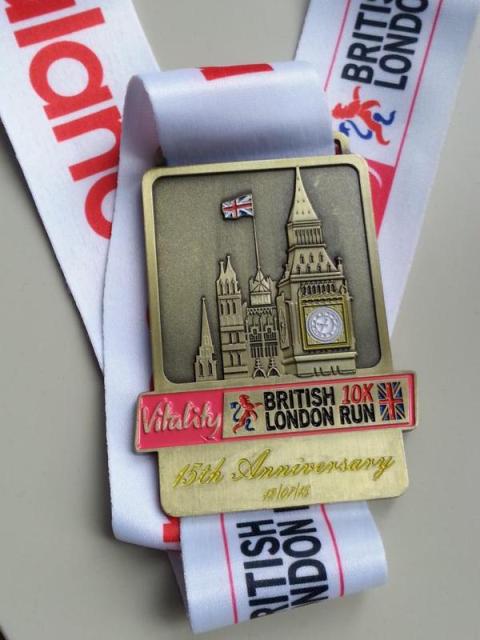 I could just delve into the depths of my mind and pull out all the expletives (English and foreign) I have ever learned and chain them together in a summary, but I will try to be constructive. Heaven knows they need all the help they can get, if indeed that care about help. Personally I think this is printing money for Vitality. 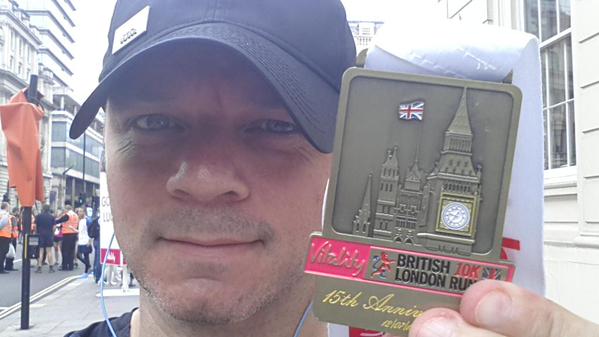 Would I run it again? HELL NO!

Would I recommend it? ONLY TO HITLER OR SADDAM IF THEY COME BACK FROM HELL AND TAKE UP RUNNING

I am pretty shocked to hear that some people loved the race. Really? Have you never been let out of your padded cell before? There was so little to like about this race that I need to stop writing and go have a lay down.

NEXT UP:
THE GREAT NEWHAM 10K at the OLYMPIC STADIUM