Skip to content
Just back after the Winter Run 10K through the City of London. Here is the skinny…

I have a feeling this cost £50 with the t-shirt but I could be wrong. Which does put it on par with the BUPA London and British 10K. The t-shirt is nice and the medal is lovely too, as you will see.

Slightly different to the aforementioned races as we didn’t start or finish by Buckingham Palace and the Mall. It started on the Embankment and finished off Horseguards Parade. We just about reached the Tower of London on our way west, but didn’t make Parliament on our way east and we did loop back on ourselves at St Pauls.

I so desperately wanted a PB but the Altra Running Torins and I had a falling out around the 7KM mark and I had both feet numb with pins and needles, hinting at the idea that I was slamming my feet down by running too flat footed and fast, something that hasn’t happened on any of my Torin runs to date. It caused me to stop twice and work on my feet to get the circulation going again.
As I said, I wanted a 10K PB for this but, as I loaded my Nike+ onto the computer there was one of two pleasant surprises:

Very few well-wishers and fans. I guess that is what you get running in winter. But the finish was fun with people dressed as polar bears, photographers, coconut milk, water etc etc 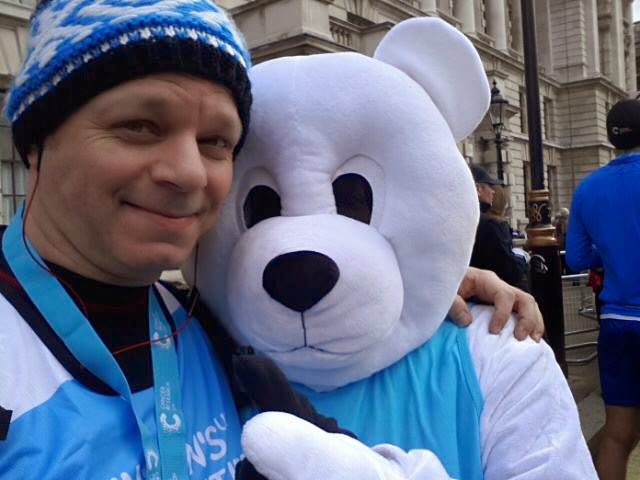 First of the year and definitely not the last.

Would I run it again? Probably, only due to timing. Not many races of this size (15000) this time of year.
Good charity event. Not a fan of the 6 and a half minutes of waiting in the cold for your corral to be let go. Esp as there was no seeding in the corrals and you ended up where you arrived. I was corral 6 and had lost the will to live by the time of the off.
Thumbs up though.
Next up: the HAMPTON COURT PALACE HALF MARATHON