Skip to content
The 29th Race of 2014 or…
The MOVEMBER Battersea 5K…
This was to be my 30th race of the year, but I was too beaten to compete at the Teach First Run The River 10K two days after the Reigate half marathon so in the end it was only race 29.
For those who do not know Movember will get men to grow moustaches and the community to support them by creating an innovative, fun and engaging annual Movember campaign, that results in:
Prostate and Testicular Cancer – Results we seek to achieve
Mental Health – Results we seek to achieve
I believe greatly in their cause, and have run a MOVEMBER race each year I have been an active runner, with the previous two being the Greenwich 10Ks (2013 review here and 2012 here) so I wanted a change, especially as I am running there again next month and have run numerous other races there, so decided upon the Battersea run.
Now Battersea, as anyone will tell you, is a pain to get to. You have to feel for those who had to struggle with the less than adequate weekend service of Transport For London
Yeah, so a simple trip to Sloane Square and a walk to Battersea park across the bridge became a four train game of snakes and ladders that ended in a short cramp inducing jog/run to collect the race pack.
The Route
All nice and simple two laps around the middle of this flat park. Although I will say that, whilst there are no hills, the tracks/road you run on roll down to the gutter so unless you are in the middle of the road your ankles are turned to anything up to 60 degrees.
How I did
I think the correct term or phrase is “meh!” and lower case “meh”at that. The getting there and the cramp and a year of running caught up with me and I ambled around. In the end I walked twice. I didn’t need to but I did and came in 3 minutes slower than my PB. I know next year, with less races and more effort I will smash all PBs. 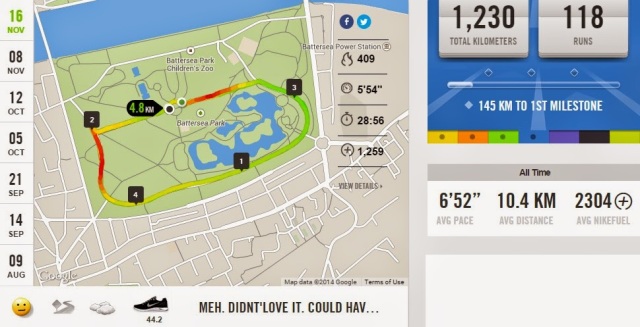 And on a further positive note I see that my average distance over 118 runs logged with Nike+ is still over 10K. Cool. At least I am doing something right.
There may be photos from the race, but in the meantime…
THE BLING
Next year I am looking forward to a different medal.
IN SUMMARY
These are well supported and organised events with a charity behind them that clearly wants to do right.
Will I run it again? I do like to support Movember this way and have enjoyed the three runs, with the fancy dress, and moustached women. I think it is a good cause. I am not sure I would run again, unless there is a gap in my calendar around then. Not next year. Maybe the year after.