The end is in sight for my first fundraising venture, I am over £1,100 towards my £1,500 target and the Pride Run will be the 15th race of the 20 in 6 months or the charity. Pretty amazing and very inspiring I think.It has given me the impetus I have missed in my running and I have pushed myself to new heights with the frequency of races and indeed more than a single race on a day, and up to 3 in a week, up to 5 in a month. Craziness.
The Route
The route was a nice, flat three laps of Victoria Park in East London. It would be pretty simple to get to via the District Line, the Hammersmith and City, London Overground and Central lines  BUT, as is the way with things, a “signal failure” (insert here any excuse, normally the driver overshot the station) at Aldgate East it was impossible to get there other than taking the round about journey on the Jubilee Line to Stratford and then taking the Central Line east one stop.

The Atmosphere
How could a Pride run be anything but friendly and fun? It was hot though, and my legs were still in bits after two races on the same day in Dublin. Still, the last bend of my run/run/run/walk method did mean a lady patted me on the arm to tell me I didn’t have to go. So I picked up speed and sped past.
How was the run?
I have run Regents Park on numerous occasions, Richmond Park, Clapham Common, Greenwich Park, Hyde Park, Green Park, St James’ Park, and Bushy Park but to be honest I really liked the layout, and the flatness of Victoria Park. I do have Wimbledon Common for a race in October, and Movember in Battersea Park coming up but, regardless of the heat, the new HOKA ONE ONE RAPA NUI shoes and my legs being in pieces, it was a good run. I would definitely race Victoria Park again.
How did I do?
I ran 6 mins slower than my 10K PB which is a miracle in itself. I almost let the MARANOIA get the best of me too and this almost became my first DNS of the year. But no, and I am glad I pushed myself for the cause.
How did the Nike + do?
Well it worked, that was the first thing after the disappointment of Dublin and a dead watch meaning neither race was logged.

The SWAG
There was a fun race village for this one. Massage, alcohol free cocktails, bagels and cream cheese, bananas, and a pretty nice race bag, much nicer than those you normally get. Better than shoe bags. Better than plastic carriers.
In it: 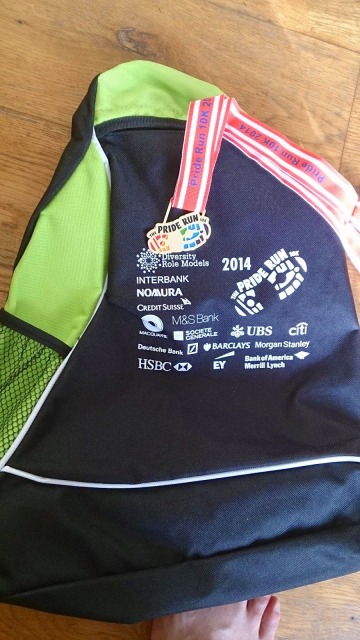 Bling
And from there you can see the medal. Bespoke yes, but tiny too.

Would I do it again? Probably. Esp given the high quality of photos from Sussex Sports Photography

NEXT UP: The London Zoo Stampede
or (and most likely)
Sean Astin’s #Run3rd virtual 10K around London