The Rock and Roll Series

The Rock ‘n’ Roll Marathon Series is the ‘World’s Largest Running Series’ with more than 500,000 people taking part in 26 North American cities and throughout Europe each year. The series enjoys great appeal for the destination athlete, tremendous local support and has firmly established itself as a dynamic running platform.
What started as a simple idea in 1998—the idea of making running fun– soon transformed the U.S. running landscape entirely by infusing music with running. Suddenly, the music every mile and party-like atmosphere made long distance running approachable and more and more people participated in something they had never dreamed they could do – run a marathon. The charity aspect proliferated participation, leading to more than $235 million dollars raised for participating charities.
Today, the Rock ‘n’ Roll Marathon Series continues to celebrate the run and not just the finish, featuring live bands along the course, cheer teams and entertaining water stations. The outdoor festival encapsulates cities in their entirety and culminates with a finish line festival featuring some of the best music acts around. Past performers include the Goo Goo Dolls, Counting Crows, Chris Isaak, Bret Michaels and Sugar Ray.

This was my second, and could have been a third if Edinburgh 2014 wasn’t cancelled.


A good route, as all the Rock and Roll races (other than Liverpool are). This took us along the River, over a couple of the bridges, past the Guinness Factory, under the oldest Gothic cathedral, Kilmainham gaol and into Phoenix Park. 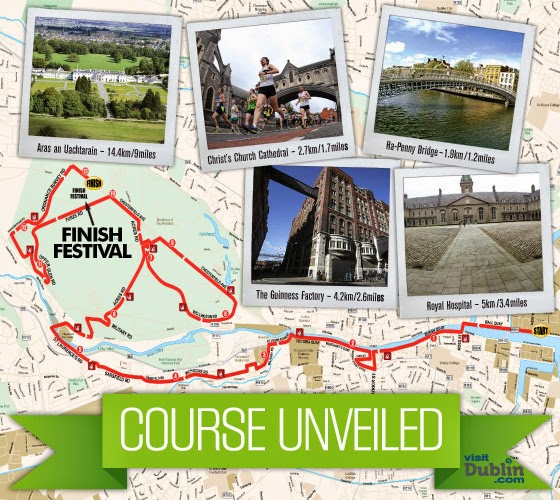 It was a hot day and I am so glad for the baseball cap I took, and the water I took on board.


There were some newly added songs to the playlist this time around. This is an ongoing thing seeing as the shuffle, well, shuffles the songs randomly, I am always on the hunt for old and new tunes that I could run to as part of my run/run/run/walk farlek routing. Here are the new/old additions.


It is inevitable that I will have to run a MARA soon. I know it. The original plan was to run the Berlin Marathon 2013 but I was injured and hadn’t trained. I do regret not attempting it, even shuffling around in 6 hours in bits. But that is spilled milk under the bridge.
May 2012 was my first organised race, the BUPA London 10K. (Addicted now, thanks)
October 2012 saw my first half marathon, the Royal Parks half in London. (Nice leaf medal, homeless guy thought I was Canadian)
February 2013 and two races in a week, albeit one Sunday to the following Saturday. So two races in 7 days. The Tunbridge Wells half and the Semi de Paris.
May 2014 first duplicate bling! (Nooooooo!)
June 2014 first race without music. The St Albans half. (I used a half full bottle of water to keep rhythm)
and now…
August 2014 two races on the same day! Yes, you read that right, TWO RACES ON THE SAME DAY! The Rock and Roll half Marathon Dublin, and the Family Fun Run, a 3K cool down for quite a few of us, after I discovered it then peddled it on Twitter.


I have noticed that, over my 2 and a bit years running I have tried most things (excluding barefoot and Vibrams, because that’s just weird). I have gained gadgets, CamelBaks, gels, waterbottles that fit here, or can be held a certain way, new running clothing that wicks, or cools, or dries, compression gear, hats, glasses, pouches, you name it.
Recently though, I just have a pair of comfy shoes (at the moment HOKA ONE ONEs), normal socks (pref Balega padded but they don’t need to be), shorts (pref Nike two in 1 but don’t need to be), Zensah calf compression sleeves, and a vest (my Pancreatic Cancer UK one). I don’t bother with compression leggings, or the CamelBak, or the gels, or even taking a specially designed waterbottle. I use the water tables after hydrating sufficiently at the start.
I do like my running music because running it terrible dull. I have the iPod shuffle with a selection of running tunes. And I do like my stats, as they act as the greatest motivator for me. I see it that, if I am not breaking a record here, or getting a new PB, or running further, then at least I am racking up the miles in total. Whilst using the Nike + GPS watch alone I have racked up 1120KM.
When I run a race I check my KM and Mile pace on the watch. It also helps me decide on when to pause for a walk. When I look back, I may not have a PB on the full distance, but I could have pushed myself to a KM, Mile, 5K, or 10K PB. It keeps me interested.
I charged the Nike + watch fully before I left to fly to Dublin. The day before it was 100% charged. So imagine my disappointment when, standing with 5 mins to go before the start of the race, I look at my watch and notice the battery on 1 of 5 bars then, as I desperately try to link to the Satellite to get some stats, it dies completely.
Tweeting back on the matter Nike+ Support simply said the watch will last 9 hours when using GPS. I was not using GPS at all. It just dies after 36 hours.
So no stats, and moreso, no route map from my perspective.


Marty Ewers and I are Twitter pals and medal whores extraordinaire. We started chatting at the tail end of my first year of running (2012) and he was on a mission to collect 100 medals. In fact his Twitter name was 100medalmart and he is almost there.
We had planned to meet up at the Tunbridge Wells half back in February 2013, my first race of that year after an injury and a bout of flu, and a week before the Semi de Paris, but for some reason our paths did not cross despite choosing a pub to meet up in and a time.
We have since raced at numerous venues but never tend to meet up, despite the crossover shown below on Marty’s medal rack. Those medals circled I have too.

This time however, after informing him of the Fun Run, there was a far greater chance of seeing each other. Marty runs a lot faster than I plod (or I never push myself, you take your pick), so I would never see him in the 7,500 runners on the Half course, but there was a good chance we would meet up at the 3K fun run. And we did! And here is the proof!
We ambled around as this race was right after the half, and was good to chat about races and stuff. And I did also see @ChilternDiva Emma although I didn’t get to speak to her as she was rushing off with her sister as I recovered after the first race. And was also spotted but not greeted by F1Jedi. Maybe next time the Tweet Up is on!
And, of course, the medal image is now out of date because the pair of us picked up 3 medals this weekend at the race, for the World Rocker and the Fun Run.

This was a three bling medal day. And the bling from RnR is always choice. From left to right: the Rock and Roll Dublin Half marathon medal, the Rock and Roll Dublin fun run (apparently a lady sprinted it to win, thinking it was a race – snort!), and the World Rocker. Now, for those who are considering a Rock and Roll event, please look at the extras they offer. The Encore, and the World Rocker were offered for running multiple races. There are also races all over the US, and Europe you can run (Nice, Madrid, Dublin, Liverpool). 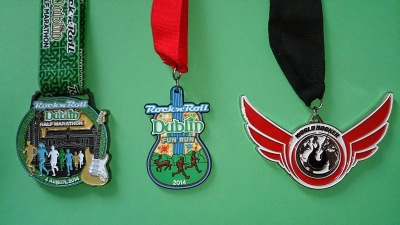 My mum would always describe my legs as “upside down piano legs”. I think I can see her point. 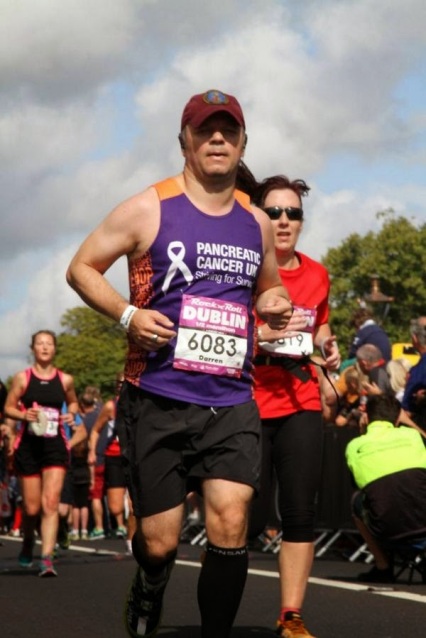