This weekend I took part in the National Lottery Anniversary run, billed as a Run to the Park, or the return to the Olympic park. I think last year was the Run to the Stadium but, given there are hundreds of workmen on scaffolding doing something there (to make it West Ham’s new home ground), this year we didn’t get to finish in the stadium: A true shame. 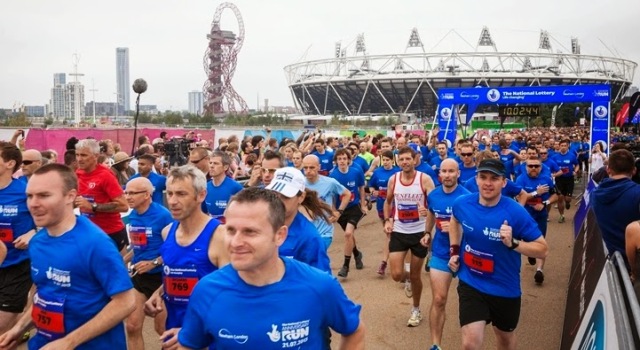 It was to be my 12th race of 20 for PancreaticCancer UK and was a 5 miler off the back of the Standard Chartered City Run (5K) last week. There was a difference though, yes, it is that time of year when I do not heed my own advice, and buy a new pair of shoes and decide to break them in at a race.

The new shoes are made by HOKA ONE ONE and are designed for ultra runners. The model I have is the Stinson Tarmac and are so spongey and comfortable that I had to wear them all week to and from the office to get used to not feeling so much of the pavement when walking.
There is a certainly level of FUG when it comes to the shoes but after wearing them for a week and then a run I do not care. Workmates have described them as ‘fugly’, they have also called them ‘special shoes’ as in special ed, and they do look a little different, not ugly as sin.

I will say this about them, they are mighty comfy, but the true test would be to wear them in the race.
Route
There was quite a bit of crossover between the Hackney Half Marathon and this race. Although in reverse order, the run around the park, up and down the dual carriageway, and back was very familiar to me and therefore time flew by. I find that if I know the route the race does seem to be shorter. And this one seemed quite short despite the oppressive heat.

That was a good thing too, despite people being quite rude to the volunteers at the water table about them leaving the caps on the water, everyone stayed hydrated and I didn’t see any fallers, collapsers or fainters on the whole route.
How it went
Pretty good, to be honest. I saw a fellow TeamPanCanUK runner around the 4 mile mark and it geed me on. My feet not only felt no adverse effect of the new shoes, they actually felt really good. My gait didn’t change either so my calves, quads and glutes didn’t hurt, my hamstrings and calves were not crampy. All in all it was a good race.
I didn’t break any records but this time was comfortable and would have been a nice sub hour if the course had been longer.
I am looking forward to running the Dublin half and 3K Family Run in the new shoes to give them a real try out.
Obligatory Race Photos
I need to decide which one to get from Marathonfoto, if any. There are a couple, one waving at the finish line and the other on the way there. I will decide on payday. Which do you prefer?

The Bling
Disappointing and clearly made for the NON-London BUPA series. I mean, look at it. This the same medal as the BUPA Great Yorkshire run in Sheffield and the Great South I have run before. Disappointing, especially given they could have the Olympic Stadium or that weird spirally viewing platform thing on it. 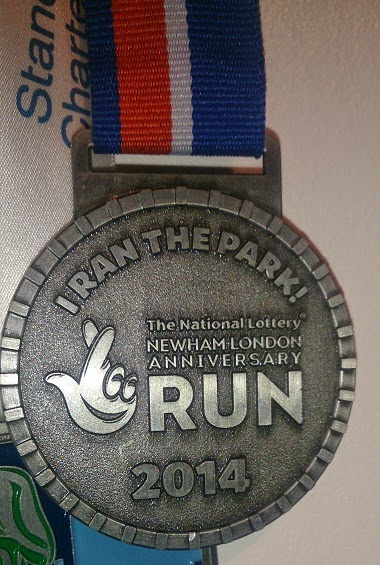 Would I run it again?
I would not but I would recommend people run it. You get a cloth backpack and a few goodies, and the tech tee (they ask you to run in it but I didn’t) is pretty nice.
Up Next:
The Rock and Rock Dublin Half Marathon
and
The Rock and Roll Dublin Family Run