I always admit that my reason for running is purely selfish. I run because I want to achieve, I want to be well, I want to challenge myself. I would ordinarily profess that, as my motivation is self-centred that I do not find inspiration in others and, for the most part this is true. Athletes are professionals, they dedicate their lives and their working day training, of course they are good. I know there needs to be talent there, but with trainers, and coaches, and scientists making them the best they can be, they do not inspire me at all.

I do take pride in running races, and it helps me feel somewhat fulfilled when I do well. And I do love the camaraderie online on Twitter, from emails and Facebook, and at the races from friends, supporters and other runners. But, as I said, I am not ordinarily inspired by anyone.

Ok, one person does alway inspires me. I just need to think of  Meghan Vogel and a tear forms in my eye.

But this weekend Andrew Jenkins, new friend, and workmate of the group, has joined this illustrious short list.
Back in February, before I started running, my London crowd decided to run a marathon. Some, let’s call them group A, decided on Amsterdam and lots of people signed up, myself included. Others, group D, decided on Dublin. There was only one issue with this, as momentum grew: some people were in both group.

Note 1: There was another racer that existed within the intersection but they spent 3 weeks leading up to Amsterdam on the 21st October not training at all and suffering from bronchitis so when they somehow ran the Amsterdam marathon in 5 hours, it was a minor miracle in itself.

Note 2: I was never signed up for Dublin. It was only a full, and I was far too far away from being able to run 42K to even consider it when they signed up. To challenge myself, and going off topic a little, I ran two halves in 2 weeks this month.

But, back to Andrew. Andrew is older than us by a good 5 years plus. I actually do not know his age, but think he is closer to the next milestone in age than we are to his previous last age milestone. (You can work out what you want from that). He is Australian, so barmy by default, and had run marathons previously. All over 4 hours, and the first 5 years earlier, and Dublin was his idea as his wife is from there, and they have a house in the lovely coastal town of Howth (Aqua, and Octopussy, the best seafood restaurants ever!).

Andrew and another member of the group run several times a week, and swim a couple too. He has completed a triathlon before and will focus on that in 2013, and I was not really party to his training regime, other than I knew he ran a bit, and always outdoors in Hackney.

So when it came to Amsterdam on the 21st October this year, when several of our group had flaked and the rest (if you remember the post) were either sick, or inured one way or another it was a great feat that every single one of us finished, and finished strong, including Andrew, who was concerned about his knees, who ran in his normal time, of just over 4 hours. 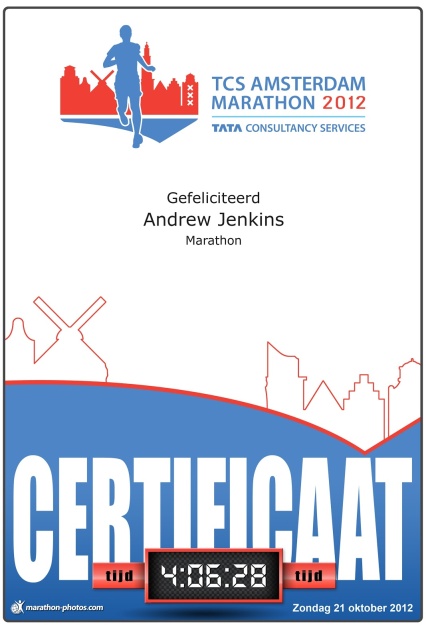 We finished strong, and Andrew and the crowd were there after their full to cheer me into the 1928 Olympic Stadium at the end of my half, before a walk back to hotel, beer, then dinner.
Roll time forward a week and my legs were still not 100% as I boarded the Aer Lingus flight from London to Dublin with other members of the crowd, now happy not to run and met up with Andrew and his wife in Howth.
He was umming and ahing about running but it was pretty obvious that yet another marathon just over the 4 hour mark was annoying him. He wanted the sub-4 hour full, but a week after his last full, this seemed like a tall order. Still, as the day approached, and everyone else started wishing they had been as fit and healthy as Andrew so they could have at least attempted the feat, we were ready to cheer him on, regardless of the outcome.