Skip to content
RUNNERSKNEES10:
with the new Runners Knees 10 questions and answers going great guns, and queuing up in my email it is my honour to introduce you to the latest tweeting runner to talk to me re our beloved sport…

1. What brought you to running?
I started running to kill some time while my kids were playing basketball.  There is a track that looks down on the basketball courts at our YMCA so I could run and watch them while they played.  It surprised me to realize that I could run a mile.  So I tried another.  Then I just kept going.
2. How long have you been running?
Just about 3 years now.  I did run in college but nothing really since then.
3. Which criteria did you use to choose races you have run thus far?
I usually pick races that are close to home because I have three children and own a business so traveling for races is not a priority right now.
4. What would be your dream race?
My dream race is an Ironman.  Anywhere.
5. Is there a running athlete/personality you look up to?
I admire Joan Benoit.  It’s really nice to know that she made such a name for herself and was so successful but is from Maine.  She is pretty accessible at local races as well.
6. What is your race day kit? What shoes do you run in?
I don’t know that I have a race day kit per se.  I have thus far, run all my races in Kinvaras, but about 9 months ago I developed PF and finally switched to Mizunos and have felt better.  I haven’t run a race in them yet, only training.  Otherwise, I usually race without music and I don’t care to have my
Garmin on either, so just a cute outfit!
7. What is your current power song?
I don’t have one specific song but I do tend to like upbeat dance-y songs.
8. Do you prefer road, cross country? Or trail runs? And why?
I haven’t tried trail runs, although I would like to.  There are plenty of trails around where I live, so once the ground gets frozen and not muddy I’m going to give that a try.  It’s pretty rural where I live so running on the road is like running cross country.  My routes mostly follow the edge of the ocean.  It’s beautiful. 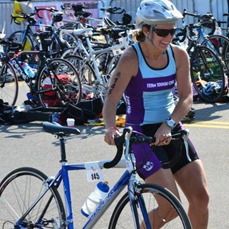 9. If you would run for charity, what organization would you support?
If I were going to run for charity it would probably be a local one like the food pantry or the Iris Network (local organization that helps the blind).  I always feel like my dollar goes further locally.  If I were to run for a large charity it would be the American Diabetes Association or the Guide Dog Foundation for the Blind.
10. What races would you recommend for a foreign runner in your part of the world (for 5K, 10K, half and full marathon)?
If you were going to come to Maine to race a race, I would want you to run the Beach to Beacon 10K.  It’s the biggest race in Maine and draws professionals (read: Kenyans) and age groupers alike.  It’s a beautiful route and is hosted by Joan Benoit.
I hear the Mount Desert Island Marathon is a difficult course but well worth it, but I have never done a marathon.
The Maine Half Marathon is a nice race as well and they do have a full marathon option.  I did run the half in 2011 and everything was great about the race except it poured the entire time.
For a 5K I would want you to come race the Lobster Roll 5K in my hometown, Boothbay Harbor.  It’s hosted by the Boosters Club who are trying to raise money to build a local track.  There is the option to have a lobster dinner after the race and you get to visit Boothbay Harbor in July!