Skip to content
RUNNERSKNEES10:
with the new Runners Knees 10 questions and answers going great guns, and queuing up in my email it is my honour to introduce you to the latest tweeting runner to talk to me re our beloved sport…
RUNNERSKNEES10 #6 Jay Watts from www.borntoplod.com 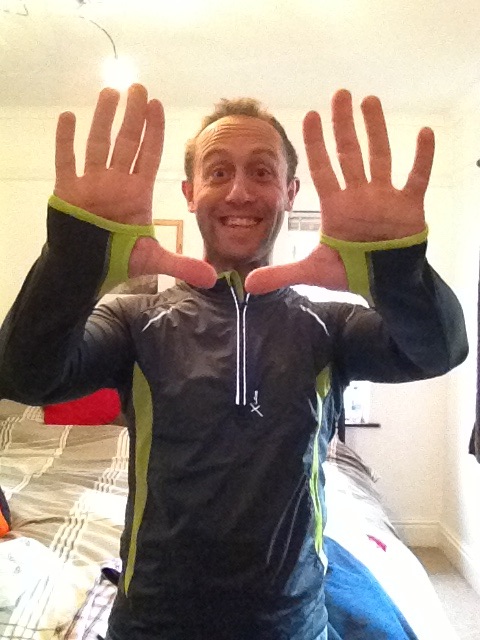 1. What brought you to running?
I really wish I could put my finger on the moment where I fell in love with running. Throughout my adult life I’d had the occasional dalliance with jogging half a mile up the road, before hobbling back feeling like a wheezy failure. Then a couple of years ago I had two such runs  within a few days of each other, then a third, then a forth…
Before I knew it, I felt like a veil had been lifted, and I suddenly saw the pleasure to be had from something as simple and primal as running. Back then I was lucky if I could sustain an 11 minute/mile pace for more than a few minutes, but it honestly felt like I was flying. Since then I haven’t looked back.
2. How long have you been running?
A couple of years – since the beginning of November 2010.
3. Which criteria did you use to choose races you have run thus far?
Honestly? Wine has been a pretty big factor. A couple of glasses of pinot grigio led to a spur-of-the-moment last-minute entry into this years Thunder Run, and that’s pretty much been the defining factor for most of my races. Other than that I’m really just happy to plod along on training runs.
4. What would be your dream race?
Hmmm. In chronological order: Restful night beforehand at a nice hotel, porridge breakfast, Bumping into loads of old friends and never-met-before twitter buddies at the start line, a coffee, a steady paced HM (I’ve not yet run a full marathon, and so won’t even let myself run an imaginary one until I’ve conquered the distance for real), great crowd support, celebrity marshals, slightly undulating grit path, Beautiful poggle-laden scenery and landmarks, a PB (of course), a medal the size of a dinner plate, a full-size dark chocolate replica of said medal, an unspeakably amazing goodie bag presented by Myleene Klass dressed as a bunny girl, a massage (by a proper sports physio – sorry Myleene), shower, post-race beers and dinner with the people I hung out with pre-race, chat till the early hours, sleep.

5. Is there a running athlete/personality you look up to?
I don’t really know much about athletics, and the elite runners are so far removed from my happy-go-lucky plodding that they don’t really show up on my radar. That said, I’ve yet to read anything about Emil Zatopek that hasn’t left me full of inspiration, so him. Oh, and Simon Wheatcroft (www.andadapt,com)
6. What is your race day kit? What shoes do you run in?
At the moment it looks something like this…

Karrimor Xlite long sleeve top with thumby-holes OR Asics Hermes crew SS top
Asics 2-in-1 shorts
Ron Hill Vizion Windlite jacket
Brooks Nightlife cap
Mizuno Wave Elixir 7 shoes (or sometime Brooks Green Silence)
I’m due for some new shoes soon, and torn between more Elixirs, the Brooks PureDrift or Skechers GoBionic. If anyone wants to send me some to try out, that’d be super 🙂
7.  What is your current power song?
Sooo many to choose from. Survival by Muse, Illusion (Tinie Tempah), D.P.M.O (Professor Green) or Thunderstruck by ACDC are all current favourites.
But the best running tracks by far are a load of mash ups called “72” which I highly recommend you look up on google. There’s a mix of The Clash, Muse and Beastie Boys that magically chops nearly two minutes off my pace every time.
8.  What is your least favourite type of race and why?
Rubbish at swimming, terrible at cycling, so I can’t really relate to the move over to triathalons that so many of my friends are making. I do like the whole “race number stenciled on your arm” thing though.
9. If you would run for charity, what organization would you support?
Uganda Child Education Trust (ucetk.org) or Cransley Hospice (http://www.cransleyhospice.org.uk)

10.  What races would you recommend to a fellow runner (for 5K, 10K, half and full marathon)?
Two events are a must…
Everyone should try their local parkrun. The inclusivity and relaxed atmosphere sums up everything that’s great about running.
Secondly, Thunder Run is something that HAS to be experienced by every runner. It’s like spending two days in a magical running theme-park. Also there are flapjacks.