The Amsterdam Half marathon Race Story

So it finally came, the Mizuno Amsterdam half marathon, part of the Amsterdam marathon weekend that would see us all flying out to another country for the first time to run (although next year I am going to be doing this a lot, so expect a couch visitor :)). The Blogosphere and the Twitterati were in force with @karleensmith, @fehrtrade and all the Run Dem Crew (111 of them, apparently) as well as friends Suma, Heidi, Sharon, James, Andrew and Frank all present and correct. 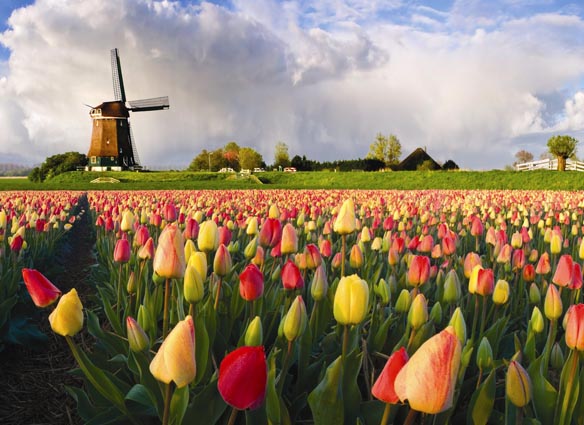 Nothing is straight forward, there were a lot of issues along the way, hurdles in the road we had to overcome. Andrew was nursing a knee injury, as was I, I had stomach pains for 3 weeks, Frank had bronchitis and hadn’t run for 3 weeks! (funnily her video on marathon-photos has her slowing to blow her nose), Heidi lost her job and focused on getting a new one and forwent her training regime and this was Suma’s first at this distance.

I was very much concerned with my knee, having spent 22 years not running because of 2 breaks to my left knee and multiple fractures on the left ankle. But it was the right and appeared after the Royal Parks half marathon two weeks earlier. Suddenly the bottom of the knee, where the ITB joins to the lower leg was very painful and any strain caused it to pop and ache. I was sure it was just a strain though, but deep down must have been worried as the anxiety (maranoia) prompted me to book in to see the physio and fixate on any little niggle I felt in that whole leg region.

So, in Amsterdam all of us were unprepared, or nervous, all with a potential DNF that none of really wanted. Still if Frank couldn’t run as she was coughing up green goop right up to the start flag, and Andy and I walked to the start like peg leg pirates and those injuries became something more permanent, then we would fail – something none of us wanted. 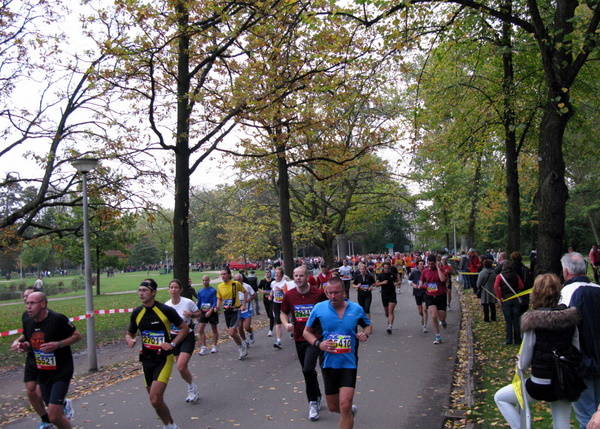 So, along with 37,000 people we went to the sports complex near the 1928 Olympic stadium, collected T-shirts, bibs and… Oh, let me tell you about the second funniest thing to happen to me – running related. The first being walking back from the Royal Parks marathon – wearing a red K-Swiss sweat top and the winners medal – a homeless guide commented “well, someone’s Canadian.” I wonder what he meant? 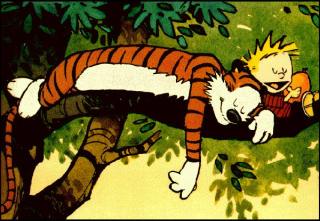 I love Amsterdam. I have spent time there with friends. I love Blackwatch. I love De Kas. But the marathon route was not the most attractive. Also the marathon itself had gone before my race and was along the same route for the most part, as was a family/kids 8K fun run. The upshot of this being that some of the banana stops were out of bananas, some of the water stops were a mess with empty cups strewn in your path, and, worst of all, there were 3 sets of KM markers. A cursory eye would see the next marker as 3KM To Go, only for it to be the 8K race route. Then, when you are expecting one of your own markers, you hit a marker for the marathon.

It was not the most scenic route and, although I do like Amsterdam and it’s tall ladies and dangerous looking, yet sturdy, bicycles, De Kas, ginger breakfast cake, Saint Nicholas and Black Pieter, Rijksmuseum and Blackwatch, other than running along one of the main canals, and then to the stadium at the finish, I found it quite unappealing to remember it. The Royal Parks Half I ran two weeks earlier was beautiful from start to finish.

Anyway, I cannot complain. This was 2 half marathons in 2 weeks 7 months after taking up running. (Note: I was planning to do the Oxford half in between and am so glad I did not).

The biggest problem I had was not the race itself, or the the slow corral, or the pressure that I signed up for this race in march before all others this was the one that started it all, or that I wanted to not fail so have raced 6 times between March and now, my problem was the start time. It was 1:30pm! Really? To stop it coinciding with a bulk of the full marathon. It’s 2 meals into the day, so I didn’t know what to do. Do I eat breakfast and lunch? Before a 9:30am race I would have porridge at 7:00am, then walk to the start. So what to do? I ate 2 bananas, and dried apricots, and Clif Shok Bloks, sat about the hotel room, drank 2 litres of water, and then ran a half marathon on fumes.

I also made the mistake of putting AA Energy drink in my bottle and not plain old honest to goodness water. This was a real mistake. Sticky, and set my stomach off the whole route.

Overly focused on my knee, making me walk more than I would have ordinarily caused a change in gait that gave hip pain. I also had one brain cell on my friends who ran the full earlier, one was injured and one was pretty sick with bronchitis for the last month and the timing on the app was spotty. But when I saw them cheering me on at the last 1k mark it have me the shot I needed to make the last couple of turns before running into the 1928 Olympic stadium for half a lap to the finish. And that spongy surface was the best. I literally bounded to and across the finish line like Tigger. 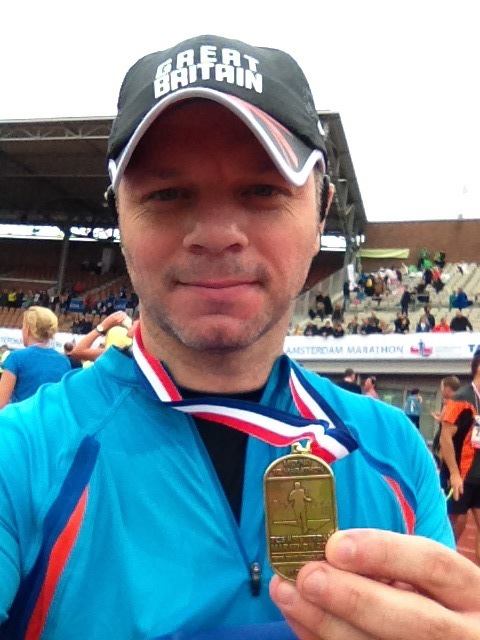 I met the other team members at the finish line after being cheered on by them with 500m to go, and I couldn’t be more proud. We all made it. No one failed. We didn’t smash PRs, but we finished strong.

Conversation on way back to the hotel was about running and that Honour system perpetuated by amateurs. No one lies about their time. You are respected for the action not the outcome. There is no oneupmanship. When someone asks about your knee, they want to know about your knee. They want to know you are not injured, that you finished well, strong and healthy. And we all love that. So well done to my London crew!

We all run at different paces. The only sport this matters, the only sport where people ask you your time but if it is not great it doesn’t matter as you are a finisher.

And then, when walked in and weighed up the options of showers and getting ready we said hang it all, and went for a beer (Amstel Gold) in the hotel bar,  followed by time in the jacuzzi and pool at hotel, then a wonderful meal and the next day, lunch at my favourite restaurant in world (De Kas) next day then home. Before a total nightmare where fog and bad weather in both the UK and Holland meant half the flights were cancelled so some people got stuck, whilst others waited around on standby, and… Enough of Amsterdam. We did it, but I wouldn’t race it again.

And as the End of year 2012 races are lined up, none of them hold any fear for me…