Has now officially replaced the Nike+ iPod app. Today I used it for the first time and indoors, so it was using the sensor in my new Nike Air Pegasus 29s.

How does it work? Well, if you are outside you say you are going to use GPS, inside you choose SENSOR and then it is the normal walking about until it finds the sensor. I bought the slightly cheaper watch that does not come with a sensor as I had one the one I have been using with the Nike+ iPod software.

Then you just run.

And my longest run ever!

With new shoes that had only be used for a 5K amble, new socks with toes that don’t feel blister-proof even if they say they are, and the new Nike+ Sportswatch replacing the old Nike+ iPod somehow I managed to run 10 miles. Now this was not at breakneck speed at all, and there was a lot of walking. This was just further and for longer than I have ever run before and I am quite proud. 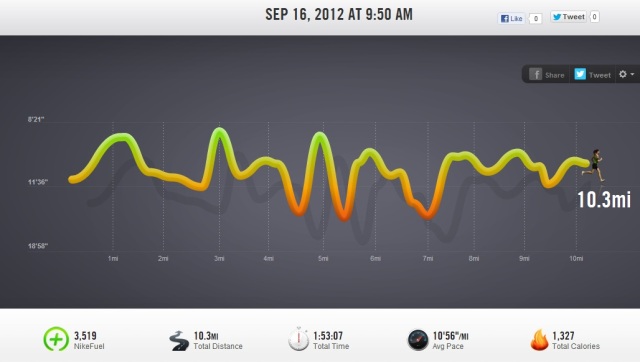