The Royal Parks Half Marathon

“When a guy turns up to Fight Club his ass is a wad of cookie dough, after a few weeks he is carved out of wood.” Tyler Durden, Fight Club.

The Royal Parks Half marathon always seemed a long way away for me. Nestling deep in the Autumn when I signed up for it it was to be my “STEP UP” 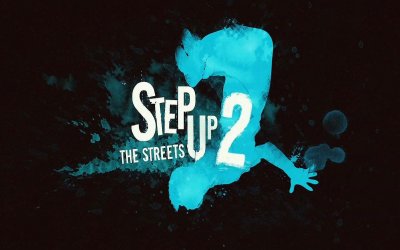 I had completed 4 10Ks in 5 months leading up to it and had completed my Longest Run Ever! the weekend before, but that was 16K, and on the comfortable sponginess of the treadmill at the Virgin Active no less. This was to be something else.
The Royal Parks half marathon takes place the same time as the Royal Parks Ultra marathon, and starts near Hyde Park corner, taking in Buckingham Palace, The Mall, Trafalgar Square (and therefore Nelson and the National Gallery), The Embankment, London Eye, Whitehall, Admiralty Arch, and then Hyde Park, and Kensington Gardens. 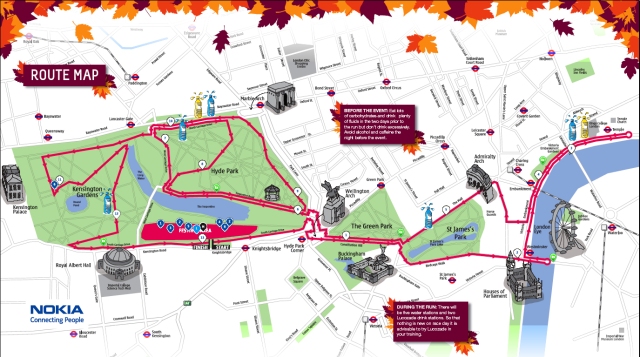 For the out-of-towners and foreign runners this would be an amazing race if you cannot get into the Virgin London Marathon, and I highly recommend it.
And so to the race…
I didn’t sleep well the night before, maranoia (marathon paranoia) setting in and causing me to worry about my lungs. I woke at 7 and walked the 3 miles to the start. And soon it was obvious that the 12,500 people walking about the muddy park were up for this. Even those in line for the porta-loos took part in the amusing warm up taken by two military boot camp instructors as TV celebrity Ben Fogle gave us a quite unforgettable speech that I can’t quite remember. 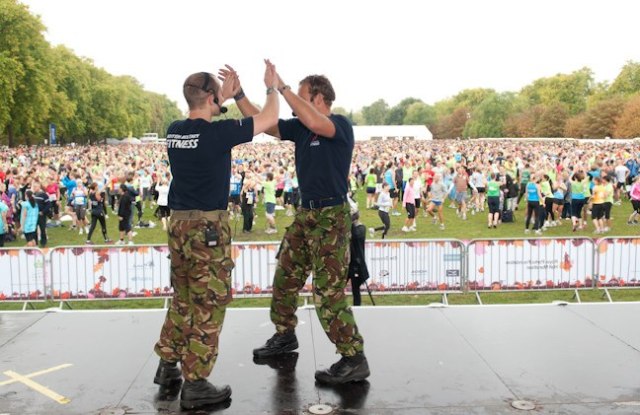 Again I decided to go to the toilet beforehand and was very glad I did. Although those who did not, both boys and girls, could be seen making use of the trees around us as we ran. Toilet trees indeed! In a Royal park?
Now this was my first true race on Twitter. There was a phone app that people could track me on. 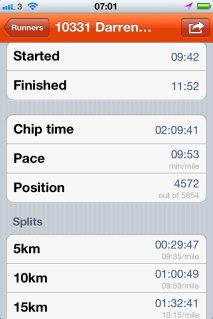 Pretty good splits, huh?
And there was plenty of support from the Twitterati here. The Run Dem Crew were around in force, and my followers (although that sounds very Messianic, and is not meant to be) were cheering me on.
And so to the start. I was going to learn the lessons from before. Shoes would be tied tightly and not new (so went with my tried and trusted Lunarglides), comfy MoreMiles socks without the individual toes as I think they may have attributed to my sore feet the other day, compression tights and compression top under shorts and vest and, new for this race, the Camelbak belt complete with large enough water bottle to get me around. The Camelbak has a zipped pouch too and the essentials were kept in it:
Although at the end I had only used one GU, I wish I had had some lip balm and the water bottle… Well, let me tell you about the water bottle.
There are several water bottles around the house, including a couple of Camelbak bottles. One is a cycling bottle, and one a running one, although they are both the same size. The cycling one has a rubber udder-like teat on the lid that you pierce with a long straw, the running one (apparently) has a nice solid plastic lid and built in straw. As the cleaner came the day before and washed everything up that was already on the drainer, and I was half-asleep when I left the house. I somehow took the cycling lid without the straw. The upshot being that about 10 feet into the race the backs of my legs were soaked with orange flavoured water.
Worse still, I could not empty it. I was determined not to get caught up in the clusterfuck that is a water stop. The two biggest time killers in my opinion being water tables and on route toilets. If you can carry enough liquid with you and pee before you start, then you can shave a good chunk of time off your race. So I carried it, until I was in a position when I could take the lid off and drink from it – which was about the 5 mile mark, leading up to Buckingham Palace on the Mall.
Next time, right lid. Or better still, seeing as I just won those Science in Sports bottles, carry one of those. I also had to keep readjusting and retightening the belt, which also pulled my shorts down at the back a little, so I apologize profusely to anyone who got to see my ass.
So, there were celebrities. 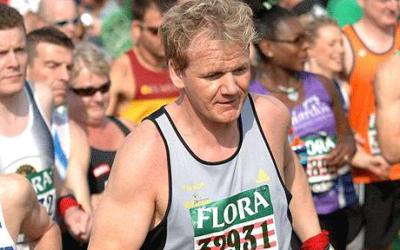 Gordon F-ing Ramsey was there.
As was AdamWoodyatt (who plays Ian Beale in Eastenders), and one of the bimbo “news” readers from Sky Sports. You know the ones, the centrefolds who pair up with a former jock and babble on about something they have little understanding of.
A running joke with the Twitterati was to beat Ian Beale and, as I ran by him at the 3 mile marker, I am pretty sure I did.
The race took a familiar route but with an unfamiliar feel – I actually felt confident in my running, and would slow down to the pace of people around me rather than slow to a walk and indeed, only walked on the Mall to eat half the GU pack, and drink, and then only a couple of times for a few yards, or half a song. This kept me going and I sloshed my way, with the orange water going everywhere from Hyde Park down by Buckingham Palace, then St James Park, Big Ben and the Houses of Parliament and Westminster Bridge to the embankment, along as far as Blackfriars bridge and back and up through Whitehall, by Trafalgar Square and through Admiralty Arch to the Mall and back to Buckingham palace, all within 5 miles.

The remaining 8 miles were through the parks, looping around and back on ourselves, so you would be running on the right, and on the left people a couple of miles ahead of you would be heading to their next mile marker.

People lined the route and, at times, ran across our path. There were a lot of people collapsed. This was not just a step up for me it seemed.

I had shoulder pain in one, then the other, probably because my running style was compromised by carrying the bottle.I do get the shoulder pain when I run on the treadmill though. I think it it because I am tense.

I also run within myself and there was never a doubt I would make the distance. It was nearing the 11 mile mark that I slowed to drain the water bottle that my legs felt leaden and starting them again was tougher than normal. Although, when I spied the end and the 800m to go sign I actually sprinted for 50 yards. 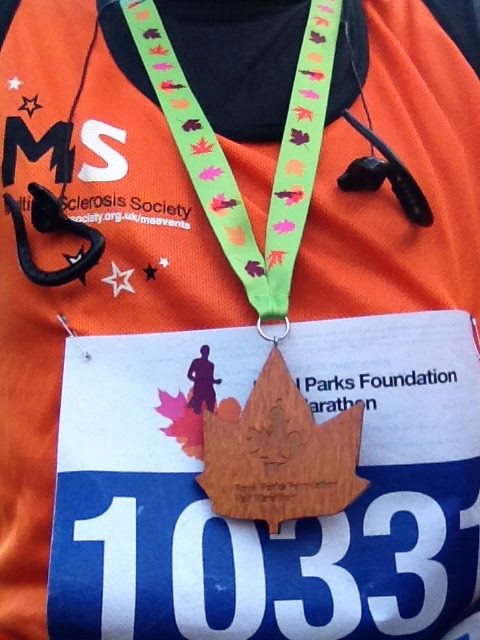 And the obligatory medal shot.

It was a struggle to get fit, what with sickness to the left, coughing and sneezing to the right, the worst run ever the week before, blisters, uncertainty over shoes, socks, everything. But all in all I think it worked out.

I could have run a mile or two more, but no more. A full marathon is a long, long way away for me.