I will write the race review for the Kingston 10K later, but first…

With the new Runners Knees 10 questions and answers going great guns, and queuing up in my email it is my honour to introduce you to the latest tweeting runner to talk to me re our beloved sport… 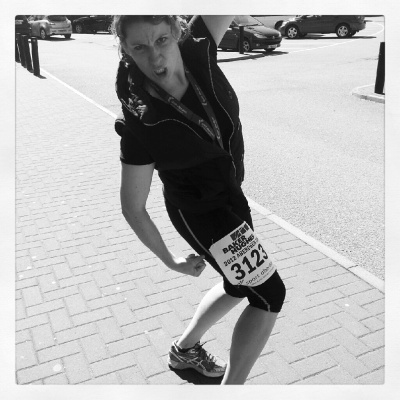 1. What brought you to running?
Obesity peppered with some desperation.  I’m in the ‘I-HATED-running-at-school’ band of runners, despite loving sport, but when I was kicked off the varsity volleyball team for having an ‘attitude problem’ (possibly confirmed by storming out of the PE office, slamming the door, and shouting obscenities at the coach), I embraced alcohol.  Turns out alcohol has a few calories in it (who knew?!), and I ‘blossomed’ into an albino hippopotamus with a penchant for fried hangover foods.  I was decidedly sub-gorgeous. 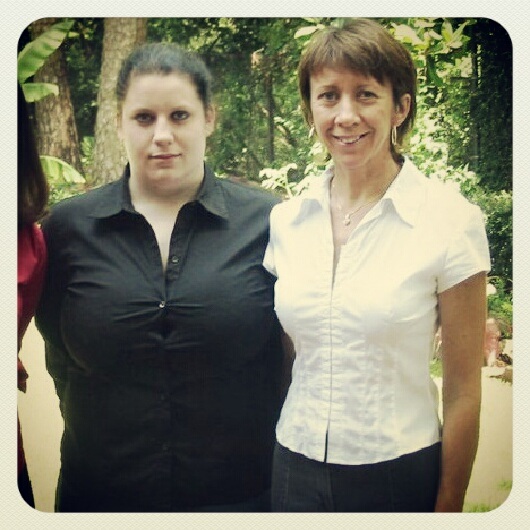 (Me and my mother – Houston, 2004 ish)
After a family holiday in which I was photographed in a bathing suit, it hit home that I was a fatty-fatkins.  After getting the photos developed and spending an evening wallowing (appropriate word choice) in self-pity, I joined a gym and started working out.  I had always looked at the crazy people on a treadmill like the nut jobs they were, but a warped sense of pride drove me to see how long I’d manage without stopping.  Once I’d realized that it isn’t advisable to go full pelt if you were planning to stay on for longer than a few minutes, I found I actually quite enjoyed running.  The more weight I lost, the easier it became, and now I use it as a way to be alone with my thoughts for a few hours a week. 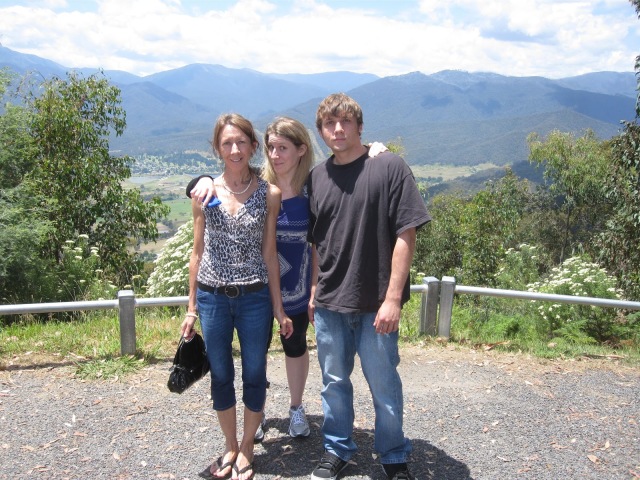 (My mother, me, my brother – Australia, January, 2012)
2. How long have you been running?
Since about 2005.
3. Which criteria did you use to choose races you have run thus far?
To begin with, location.  I don’t drive (not that I didn’t want to, but that’s a long story for another day), so any race I went to had to be close.  I also had to pick a race that I knew I could complete.  My first race was the Baker Hughes 10k in 2008, which I ran in just over 47 minutes.  Since then, I have converted several driving friends who ferry me to faraway places like Inverness, Fraserburgh, and beyond!
Since the start of 2012, however, my priority (apart from being able to continue consuming delicious food and a few adult beverages without ballooning again) has been medals.  I actively seek out races that give out finishers’ medals, although I have attended a few that have interested me for other novel reasons (Perth Kilt Run, NVA’s Speed of Light). 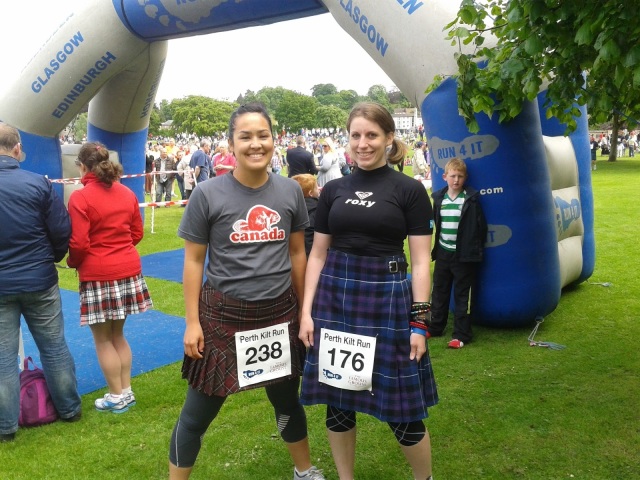 (Danielle and me before the Perth Kilt Run – June 2012)
4. What would be your dream race?
Anything that I came first in!  Actually, I have been the first female finisher a few times, but they have been in charity runs (I know – too competitive), and so I have been given zero recognition for them.
I would love to run the London Marathon, but have yet to be successful in their ballot.
I would also love to run the Houston Chevron marathon, since I think it would be nice to run a big race in my hometown, but being a teacher, it falls just outside of my rigid holidays.  Maybe I’ll take a sabbatical after saving up for a while and give it a crack.
Until then, I’ll have to ‘settle’ with the Paris marathon in April, 2013.  Here’s to some heavy months of training in some miserable conditions!
5. Is there a running athlete/personality you look up to?
Fauja Singh.  Because, I mean, I’ll consider myself lucky if I can still use the stairs unaided if I make it to 100!
6. What is your race day kit? What shoes do you run in?
My race day kit varies greatly.  Sometimes I’m in fancy dress, sometimes I’m coordinated (mostly I’m not).  Truthfully, it’s whatever is at the top of the pile in my workout clothes drawer, but there are some constants:
Shoes?  Well – I tend to ignore all this talk of wearing the proper running shoes, and I wear ones that feel comfortable, have enough toe room, and don’t cost too much.  Oh, and I refuse to wear all-white trainers.  Right now, I’m breaking in some Brooks Ghost shoes.
7.  What is your current power song?
‘Promises’ by Nero never fails to get my psyched.
8.  What was your worst running experience and why?
Getting a killer stitch during my first half marathon after a strong first half and having to walk, having to pull out of a race due to illness – there have been several bad/painful/frustrating running experiences.  So I’ll stick my the most recent:
Last Tuesday night.  I was halfway through a really demanding week at work, I was feeling tired and run down, and I had skipped the gym (this is how you can tell I am not in a good way).  A friend mentioned he was planning a run, and despite my lack of energy and killer shin splints (which are still plaguing me, by the way), I decided to join him.  Having not anticipated any physical activity, I had just wolfed down an egg sandwich and a 1.5 litre bottle of sparkling water.  An unwise choice, it would seem.  I have never genuinely feared that I could soil myself in public before that run, and I am amazed (and relieved) that I managed to climb the stairs and unload my troubles into a public restroom with my dignity intact.
9. What is your favourite and least favourite medal? Is there one medal you are desperate to get?
My favourite medal is either the Loch Ness Marathon medal (my first, and to date only, marathon medal) or the Huntsville half marathon medal, because it was a race run with a friend in my home state and it was a really enjoyable day. 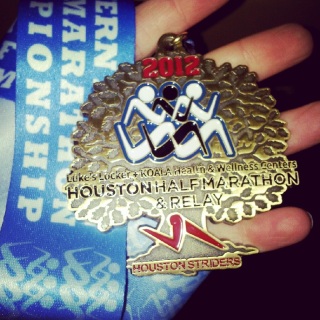 My least favourite is going to make me sound like a heartless monster, but the Race for Life medals are tiny and cheap (and I KNOW the purpose of the 5k is to raise money for cancer, not to get a medal).
After a bit of internet stalkery, I am currently lusting after the Royal Parks half marathon medal.
10.  What races would you recommend to a fellow runner (for 5K, 10K, half and full marathon)?
‘5k’ – Technically a 6k, the Wildhearts Santa runs are usually quite fun events.  In all honesty, my experience of 5ks is limited.
10k – Balmoral 10k with the infamous hill!  Not a course for a PB, but you feel like you have really conquered something when you pass the bagpiper at the top of the hill.
Half marathon – I’d have to say the Stonehaven half marathon, again for the sense of achievement upon finishing the thing!  There are one or two hills, and it supports a worthy cause.
Marathon – I’ve only done one to date, so can only recommend Loch Ness.  It was a challenge, but you’ve always got company, and the scenery is beautiful (when you’re not hidden away by trees).