Skip to content
Bling!
I have succumbed to the inevitable. Having a staggering haul of 2 medals from my running life to date, and having spent time on forums chatting about it I finally went on eBay and purchased a running medal display. Today it arrived. Now, it is much smaller than I thought. I guess this is because the ones I have see online have been weighed down with dozens of medals. 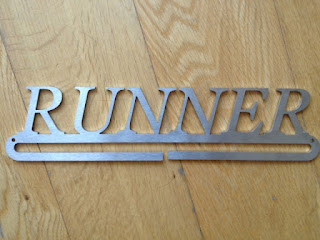 Still, on a weekend when I am planning 2 runs after a lot of work drama yesterday and then a subsequent night out on the beer to recover from it, I needed a shot in the arm. So here is the haul to date. 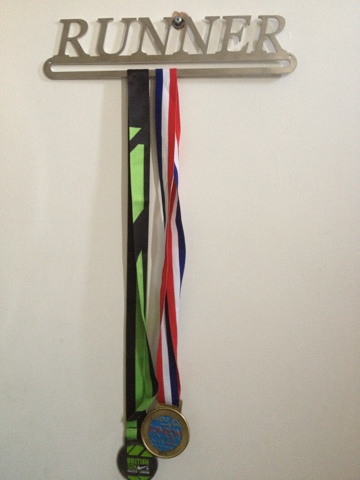 Huge, huh?
And so to the weekend. This week I ran Sunday, Tuesday and Thursday 10K, 10.5K, 11K in great times, all within my BUPA London 10K outside time, even whilst on the constricting treadmill, but with everything that went on yesterday, and inspired by the London 2012 Olympic Men’s Marathon on Sunday I am going to try to run 11.5K today, and 12 tomorrow, FARTLEK, and aiming to break a few of my records. Let’s see how it goes:
Saturday…

I go to the Virgin Active gym at the Barbican and have for a year and a half but it is only in the last 5 months that I have been on the treadmills heading toward my marathon aim.

The day after I worked out I could actually run (see older post), when I was an excitable puppy eager, straining at the leash to launch myself across the park after a Frisbee, and before I had worked out the whole Nike+ IPod thing (again, see older posts) I was on the treadmill, psyched up, ready for two runs in two days. I started slow and a guy got on the treadmill next to mine. I ambled along and then almost fell off the damned thing when this loud WHOOSH! noise came in my ear, then again, then again. I look around as I though the guy next to me was sneezing, clearing his nose, something. I watch him out the corner of my eye and then it came WHOOSH! Like Darth Vader on an uphill hike. WHOOSH! It was then that I noticed he was breathing out of a tracheotomy tube at the bottom his neck. It freaked me out. Less so today, when my tunes were loud and I could barely hear him, when I knew that I will always outrun the people either side of me tens time over.

And so there was… at a treadmill near you…

Now at the other extreme, although he wasn’t really anything other than a man wanting to continue exercising post op, is Anorexic girl. She is blonde, beautiful and, and this is the real shame, clear anorexic. She is obsessive about her exercise and will spend an hour on the treadmill and an hour plus on the elliptical trainer, as well as completing classes in one session. On the elliptical she will power her way on the hardest setting. Her belly is distended, a common trait in anorexics and bulimics, and it is sad to see her like this. The most annoying thing is, though, that NONE of the personal trainers, or gym staff, or management or anyone will say or do anything. They (big gyms) don’t care as long as the direct debit clears every month. They won’t try and stop the muscle heads in the free weights rooms from snapping their amorphous bodies in two by lifting too much, they won’t stop obsessives doing spin class after spin class until they can barely move, or an anorexic girl from working herself out to death.

There is a Nike+ event today. I am not sure of the detail but people all over the world who sign up are going to have their running distances added up for something Olympic related or other. Hopefully Nike will dontate the monetary equivalent to the miles run to charity. We shall see. Although I am tired after a night feasting, and woke crazy early, I shall attempt a 10K today, maybe a little more. I do have lunch plans, but I have eaten breakfast and when it is settled I shall go.

In a wonderfully cool note, my nemisis Mo Farah won the 5000m last night at the Olympics, joining an illustrious list of runners winning gold at both 5 and 10K. Well done, Mo.I shall see you on the streets of London for our next encounter. 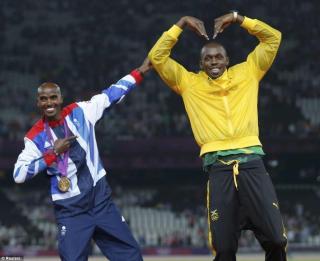 Mo with some other guy, maybe a runner, not sure.
Major Fail…
I am thinking this was a bridge too far at the moment. My legs were leaden, the water sitting in my belly made me want to pee all the time and, indeed, I stopped after 2K to do so. I just couldn’t get my rhythm, despite wanting to run.
I also had a lot on my mind. I had work nonsense to worry about, and am travelling this week, and wanted to take my Nike+ Ipod but thought about wearing them through the security and how the transponder would set the alarm off and…. (you get my drift)
I was tired, I am tired. House guests and staying up until late, waking ridiculously early, and running a long way yesterday caused this. I am not ready for:
The simple facts, but all is not lost. This was a test I failed. So here it is, Sunday’s run in all it’s shame… 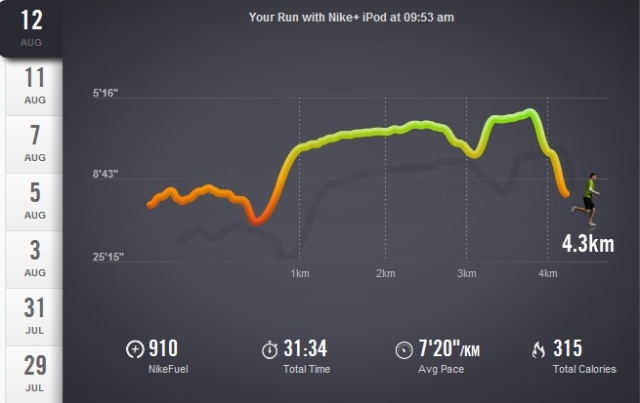