With the addition of a set of races stretching from July to October motivation was now at a high, but what of progress. I had removed the M word from the equation, the dreaded full marathon, 42 kilometers of pain and anguish that I do not think I can complete to this date with any degree of comfort and believe that the sense in my 10K (May), 10K (July), 10K (September), half (first weekend of October), half (last weekend of October) can be seen by all.

There was a new motivator after the BUPA London 10K – BLING!

I had only ever received one medal in my life before, for gymnastics at school, and I received the wrong one then. I had earned this. I had run 10K in sweltering heat with barely 2 months of training, after not being able to run at all. I felt like this was a major achievement for me.
So then came the next search, for the races with the best medals, and looking at only races that gave medals. Oh, to look and find all the medals I had received would be exactly the kind of action needed to boost my self-worth and sense of achievement. There is a lot of talk on runners’ forums about medals. The best medals are for the Disney marathons (including the Disney Princess where you dress up), the Robin Hood, the Shakespeare, the Marine Corps races in the US, and the Royal Parks, which is a wooden leaf shaped medal. This last one being the only one of the list I am completing this year due to time.
I had my first medal and knew that I had exactly 6 weeks until my next race, the Nike British 10K in London, with a very similar route, but a staggering 25,000 entrant mob to run around.
Progress Needed, please!
I wanted to up my pace. I had 3 10Ks in a row, so no additional distance needed, so at the gym on the treadmill I just needed to speed up. I also decided to start running to the music I had downloaded and make a playlist that would inspire me to greatness, or at least gee me up a little.
Having purchased Nike + running shoes, and at the time not knowing what this meant I decided to go to RUNNERS NEED – a chain store that specialises in checking your gait and getting you shoes that fit. I went to the RUNNERS NEED on Chiswell Street with the following shopping list. 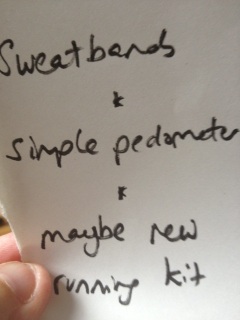 The girl in the store was dealing with another customer, a city type, all khakis and blue Ralph Lauren shirt, who was running the Run to the Beat race the next month. He had clearly used the RUNNERS NEED service where you run on a treadmill and an amateur checks your gait and then sells you an expensive pair of shoes whether you need them or not.
This seemed to take and age and included the two just chatting as I stood there waiting, and waiting, and waiting, before finally we reenacted the Monty Python Cheese sketch…
Runners Need Girl – “Hello, sir, how can I help you?”
Me – “Good morning. I was wondering if you had any sweat bands. Preferably the longer ones that Nike make.”
Runners Need Girl – “No, sir, we do not carry any sweat bands.”
Me – “Not to worry. I would like a simple pedometer.”
Runners Need Girl – “Oh, I am sorry, sir. We do not carry simple pedometers. We do have the Nike and Garmin GPS watches though.”
Me – “Ah. I was looking for a simple £20 pedometer, not a £200 watch. But thank you.”
So I left empty handed and will never darken their door again. The clothing was only top range, all over-priced, their gadgets were again top range, and over-priced, and as for the shoes… But then at home I went online and bought a simple pedometer that clips to your belt, and some double wide sweatbands.

Although in the end, this piece of crap is not usable in any way, shape, or form. But these are great. 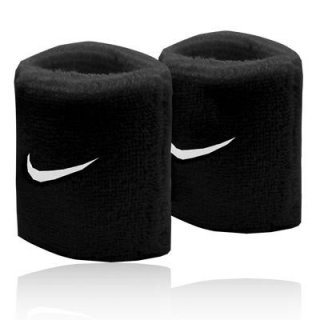 I then started to wonder what Nike+ (emblazoned my shoes) actually meant, and was actually very surprised to find out that the Nike+ range is a way of using a transponder in your shoe to link to your iPod using a receiver, or your iPhone using bluetooth. I already had the shoes, I already had an iPod (and a Nano no less), and already used iTunes, so thought I would give it a go and bought the widget that fit in my shoes.

THIS IS AMAZING!!!
And it is. I love my statistics, especially as they show progress, but if no real progress in times or distance, they show an accumulation of effort, so I may not be running faster, or further, but I put in the miles. Right?
Up until then I had been using the Runners World Training Diary which was okay when I had nothing else, but, rather than keep a daily record of my weight, exercise times and distances etc – I was just logging how far I had run in the front.
But Nike plus was fantastic and simple.

And this is an actual screenshot of my Nike+ page.
The One Downside, and a confrontation with Nike+ Support that taught me something
Okay, so this really annoyed me. I had run the longest of my runs to date. It was 15K or something, I was beaten, I was sweaty and exhausted, and a little dizzy, but proud. I couldn’t wait to see my stats, and then, as I got home and, in my exhaustion yanked out my iPod headphones. I was then to my horror that I discovered that the Nike+ receiver attached to my iPod had be disconnected too and, as I tried to see if I could resume the workout it told me I hadn’t worked out that day. Nooooooooooooo!
Being British I like to complain and queue, and drink tea, and found it natural to sent a rambling email to Nike+ support telling them their product is crap. Why? Well, even though I do love it, it should store stats to the iPod real-time and not wait for you to say End Workout. I mean, if the iPod ran out of battery, or you accidentally unplugged the widget, then you lose all your stats, all 15K of them.
Actually, eventually, Nike+ support did come back to me and told me that if you log on to you iPod or iPhone using Windows Explorer you can find the workout… kinda like this
How to Recover your Workouts using Nike+
For PC users:1-Dock your iPod nano

2-Open Windows Explorer (you can also open the folder, My Computer).

3-Determine the letter of the drive the iPod nano is named to.

5-If the iPod nano is not listed in the drive mapping, go to iTunes > highlight the iPod nano in the source list > and in the Options section of the Summary tab

7-Key in the below address, with the correct drive letter in place of the “F.”8-For example, F:\iPod_Control\Device\Trainer\Workouts\Empeds (Note: the slashes, are “back-slashes”; which is the key above the Enter key)(((Please note if you try and cannot see iPod _Control, Please follow xxxxx, If you can, do continue to 9xxxxxTo show hidden files in Windows 7Close all programs so that you are at your desktop.Click on the Start button. This is the small round button with the Windows flag in the lower left corner.Click on the Control Panel menu option.When the control panel opens click on the Appearance and Personalization link.Under the View tab in the Folder Options category, click on Advanced Settings.Under the Hidden files and folders section select the radio button labeled Show hidden files, folders, or drives.Remove the checkmark from the checkbox labeled Hide extensions for known file types.Remove the checkmark from the checkbox labeled Hide protected operating system files (Recommended).Press the Apply button and then the OK button..Now Windows 7 is configured to show all hidden files.xxxxxxxxxxxxx)))))9-Click “Go” or Enter. The Sensor folder(s) will be displayed.

11-Within the latest folder, find the corresponding .xml files (date stamped) missing from your Nike+ account.

12-Safely undock, then re-dock your iPod nano. You may need to close and re-open iTunes.

13-The run should be synced.
And so I was back on track, using the wonderful Nike+ Ipod functionality to track my runs. And this is a good bit, it tells you when you have run your best 1K, 5K, 10K, it tracks you against people from your age group, or the Nike+ community as a whole, the stats are broken down, and summarised, and well, I love my stats.
Presently I have run 143K, with an average pace of 7:37 per K, I run 30K more than the rest of my age group and the Nike+ as a whole in the last 30 days, although my pace is 20 seconds slower than the rest of my age group. I have 15 runs with 9.5K average distance traveled each time.
And so to my second 10K which was, in keeping with the post so far the NIKE+ British 10K
The Nike+ British 10K was to be my new PB. I was going to do so much better than the BUPA London 10K I had run 6 weeks earlier. It was going to be awesome. But then, things are not always as expected.
For a start there was confusion over what to wear. We were sent a pack that included the number you wear when running, and a booklet that said this MUST BE WORN. However in the pack was a black Nike+ British 10K t-shirt, that had my number printed on it. If I was to wear the t-shirt I wouldn’t need to wear the number, right? But then I thought that this was down to the number having my emergency information on the back. But they had they information anyway, from the point I registered for the race.
Then there was the use of the Nike+ Sponsored British 10K website with Facebook. The idea was simple, my progress was to be posted automatically as I reached each 1K marker. People could leave messages of cheer and they would be broadcast to me on big screens throughout the race. Hmmm. Well, what actually happened was that 1. The updates reached Facebook 3 hours after the race and 2, a day later 2 dozen posts hit by page. Not good.
The Nike+ Sponsored British 10K was nowhere near as nice as the BUPA. It was raining, which was okay, as I didn’t want to run in that heat again but it fell down in so many ways.
And that is what I did. I ran with a PB (not hard giving I have only run 2 races) of 1:01:58 according to some stats, 1:02 rounded up.
So I beat my first race by 5 whole minutes! I also ran for the first 7K and not the first 4. I also took my own water so as to avoid the craziness at the water stops and ensured I urinated beforehand.